On Monday this week we hosted a webinar focused around the use of altmetrics for books and some of the current challenges facing researchers and publishers that altmetrics can assist with. As well as this we wanted to examine new pressures from assessment bodies, and discuss how altmetrics may fill certain needs that traditional metrics fall short on. We invited three guest speakers to talk on these subjects: Amy Earhart, Associate Professor at Texas A&M, Jane Winters, Professor of Digital Humanities at the University of London and Charles Watkinson, Associate University Librarian and Director of University of Michigan Press.

The importance of context

First to speak was Amy Earhart from Texas A&M University. Amy spoke about where their  faculty are with metrics and overcoming the blockers such as feeling that metrics may have a science bias or being nervous that quantifying their work might ‘box them in’. Amy then went on to talk about how some faculty can be nervous when it comes to applying altmetrics and that how some professional bodies such as the AAUP have disputed the usefulness of the new metric.

To remedy this Amy stressed the importance of explaining altmetrics in context and how they can be used with traditional metrics to uncover new insights that can be directly applied to their work. At Texas A&M, Amy told us, they hold workshops and distribute best practice documentation on the use of scholarly impact metrics. Amy finished by speaking about the how altmetrics should be used alongside traditional metrics to build a narrative of how work is being picked up by a wider audience and not just at an an institutional level. 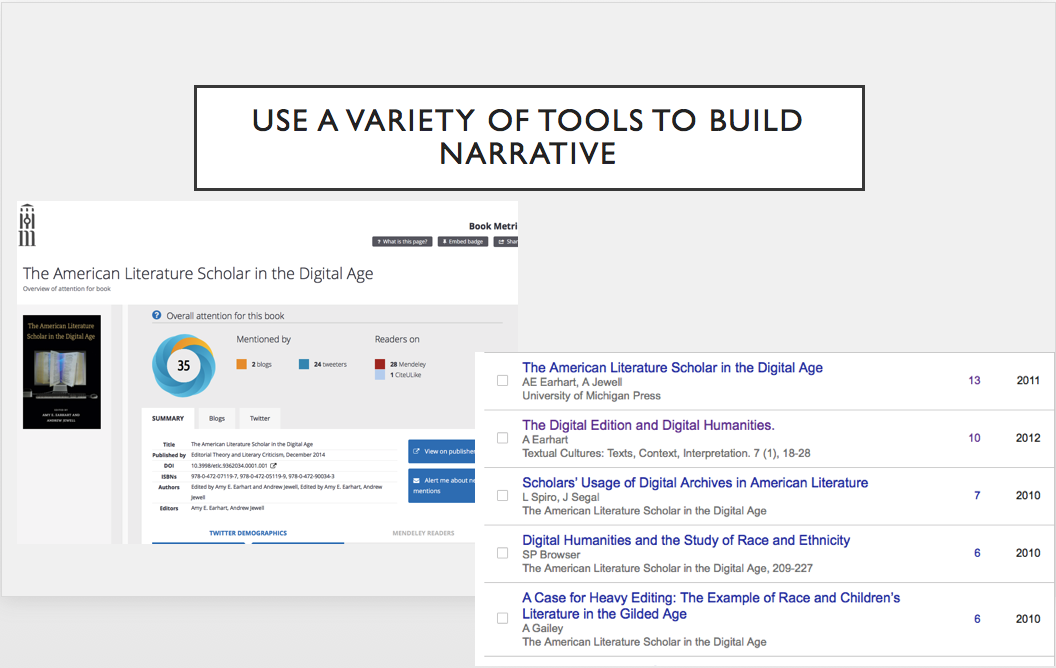 The value of publishing

Jane Winters was next to give her presentation about the importance for humanities professionals to be published. Jane started by speaking about how getting published is good for getting researchers and their work known, getting feedback from peers and contributing to debate. She then went on to talk about how valued monograph books are for advancing the career of a researcher, and the need still to publish in this long form. Jane emphasized the concerns facing researcher when deciding where to publish, such as whether there’s a hierarchy of publishers or if there are risks in publishing Open Access.

Jane then spoke at length about the current thinking around peer review and new initiatives by organisations such as the Open Library of Humanities to publicly state what their policies on peer review are. Jane’s presentation concluded by looking at new technologies, such as altmetrics, that are experimenting with measuring new facets of what it means to be a researcher and produce research. She noted how these technologies are still closely linked to the publication process, but that recognising social and academic engagement is an important step in rewarding good academic citizenship.

Delivering insights to authors and publishers

Finally we heard from Charles Watkinson from the University of Michigan Press. Charles’s talk focused on using altmetrics from a publisher’s perspective. Charles started by speaking about the main uses of altmetrics for him and his colleagues at the press. As well as integrating the badges into their journal and book pages, his staff use the Altmetric Explorer to browse and report on the attention relating to their content, and that of other publishers. 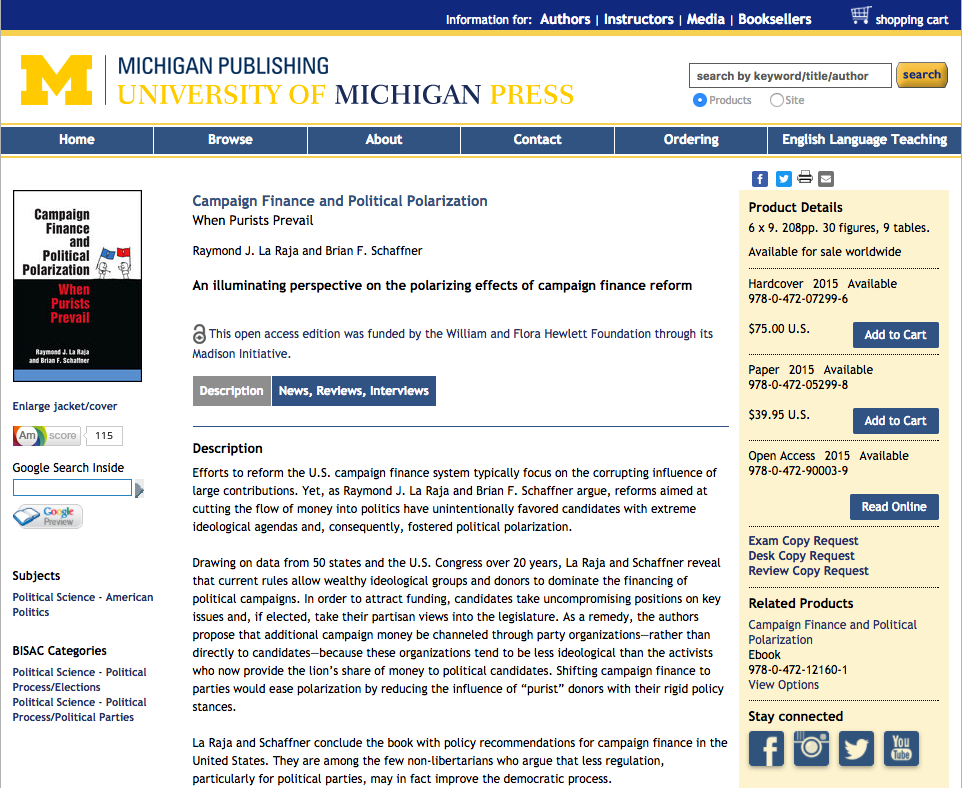 Some main use cases of the insights that Altmetric data provides to his team, Charles outlined, are in helping to retain and attract authors, assisting editors in guiding their list and aiding their marketing department in finding opportunities to promote their outputs.

Charles went on to show an example of how Michigan used the Altmetric Explorer to analyse the attention that one of their recently published Open Access titles was receiving. By using the Explorer they were able to see the immediate feedback the book was getting on Twitter and also where the book was being picked up by researchers in other fields. He then showed an example of a book published in 2001 that they can now see is being used in syllabi across the US by analysing the Open Syllabus data within the Explorer. They can also see that, in particular, the book has been picked up for use on education courses which will influence their marketing efforts when they come to produce a second edition.