We’ve had a great week learning about how Altmetric came to be what it is today. To wrap up our #altmetricorigins campaign we thought we’d take a look back over some the biggest milestones for Altmetric since it started in 2011!

Launch of Altmetric and the Explorer for Publishers

Altmetric was Founded by Euan Adie in 2011. After winning the Elsevier Apps for Science competition Euan was able to develop the first version of the Altmetric Explorer, which launched in February 2012.

Altmetric received investment from Digital Science in June 2012 and are still part of the group today. Most of our team sit in our London office, although we have colleagues in Sydney, Europe, the US and Canada! 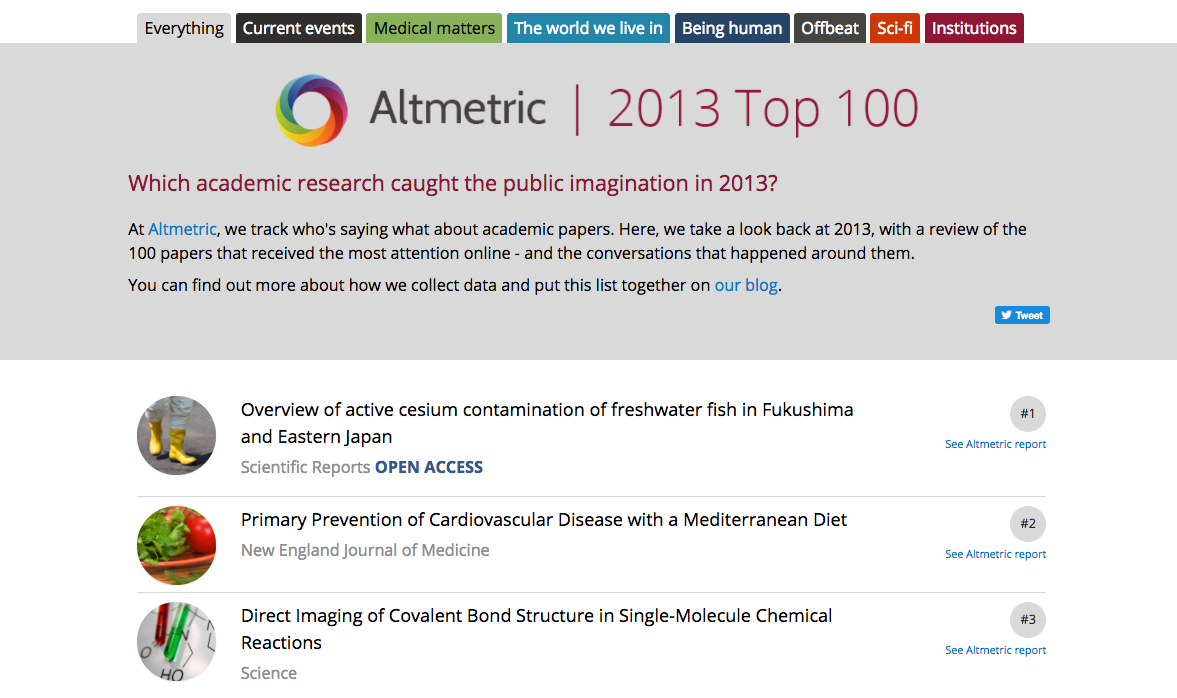 In December 2013 we launched our first Top 100: a list of research articles that generated the most attention across the sources that we track. The paper that topped the list that year was “Overview of active cesium contamination of freshwater fish in Fukushima and Eastern Japan“, which even today is still getting attention online!

The data for the list was collected using the Altmetric Explorer, and the finished release received coverage from news outlets around the world. Subsequent lists have since been released in 2014 and 2015.

Launch of the Explorer for Institutions platform 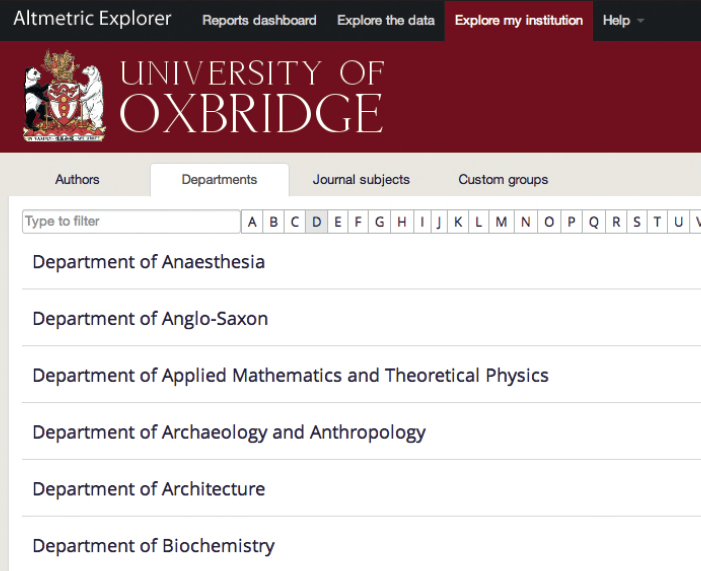 In June 2014 the first version of the Altmetric Explorer for Institutions was launched. This new version included all the functionality of the original Explorer, but also had the ability to view original mentions and summary reports for published work at the author, group, departmental and institutional level.

By January the next year over 20 world-leading institutions were using the platform to monitor and report on the online attention surrounding research published by their faculty.

You can read about the ways some of them are using the data in our online case studies. 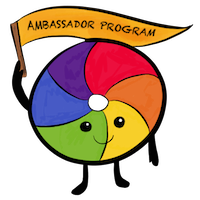 The Altmetric Ambassador Program started in July 2015 to help facilitate the global promotion of altmetrics. The program has now grown to over 250 ambassadors spanning the globe running workshops, encouraging best practice and assisting colleagues with using altmetrics.

In 2015 we partnered with Springer to launch Bookmetrix. This new platform offers title and chapter level metrics across all Springer book titles. Bookmetrix offers real-time reporting on how often an individual book or chapter is mentioned, shared, reviewed or read online.

Today over 1,5000 authors have Tweeted about their Bookmetrix data, and the database includes attention for over 230,000 books and 4,000,000 chapters.

In 2013 we, along with other publishers and metrics providers, started working with NISO to define standards for using altmetrics. The guidelines are now available on the NISO website and lay out the three main principles of altmetrics data: Transparency, Replicability and Accuracy.

You can find our report on how our data complies with the standards here. 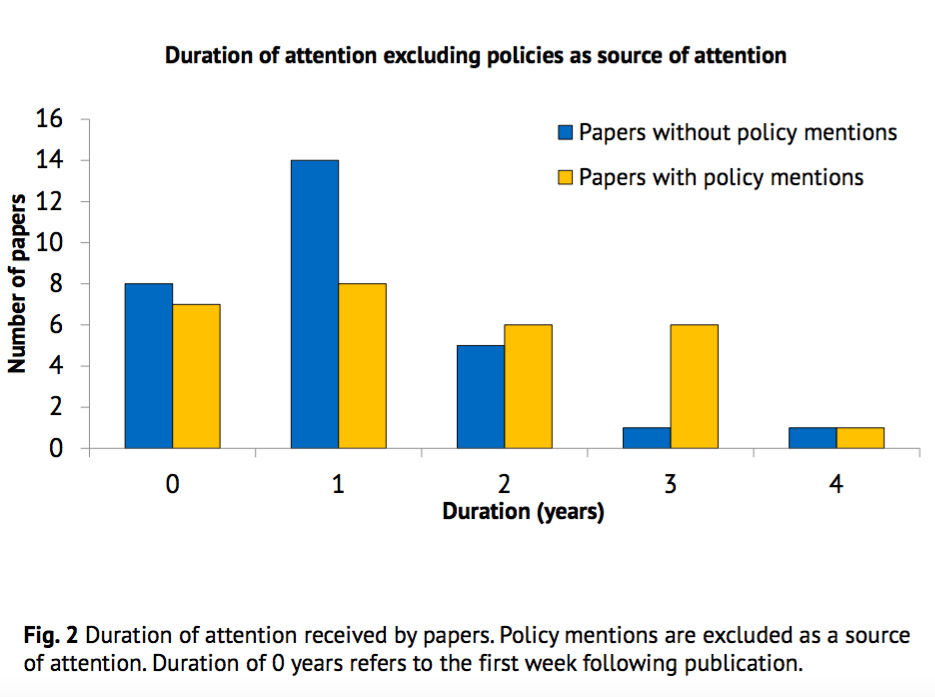 The application window for the first Altmetric research grant was opened at the start of this year, giving researchers across the globe a chance to win funding of £1,500 to conduct research that facilitates the development and understanding of altmetrics.

The aim of the grant is to push the boundaries and challenge the thinking around altmetrics. This year’s winner was Dr. Lauren Cadwallader who has conducted research into whether it is possible to identify which papers make it into policy by tracking their altmetric attention. 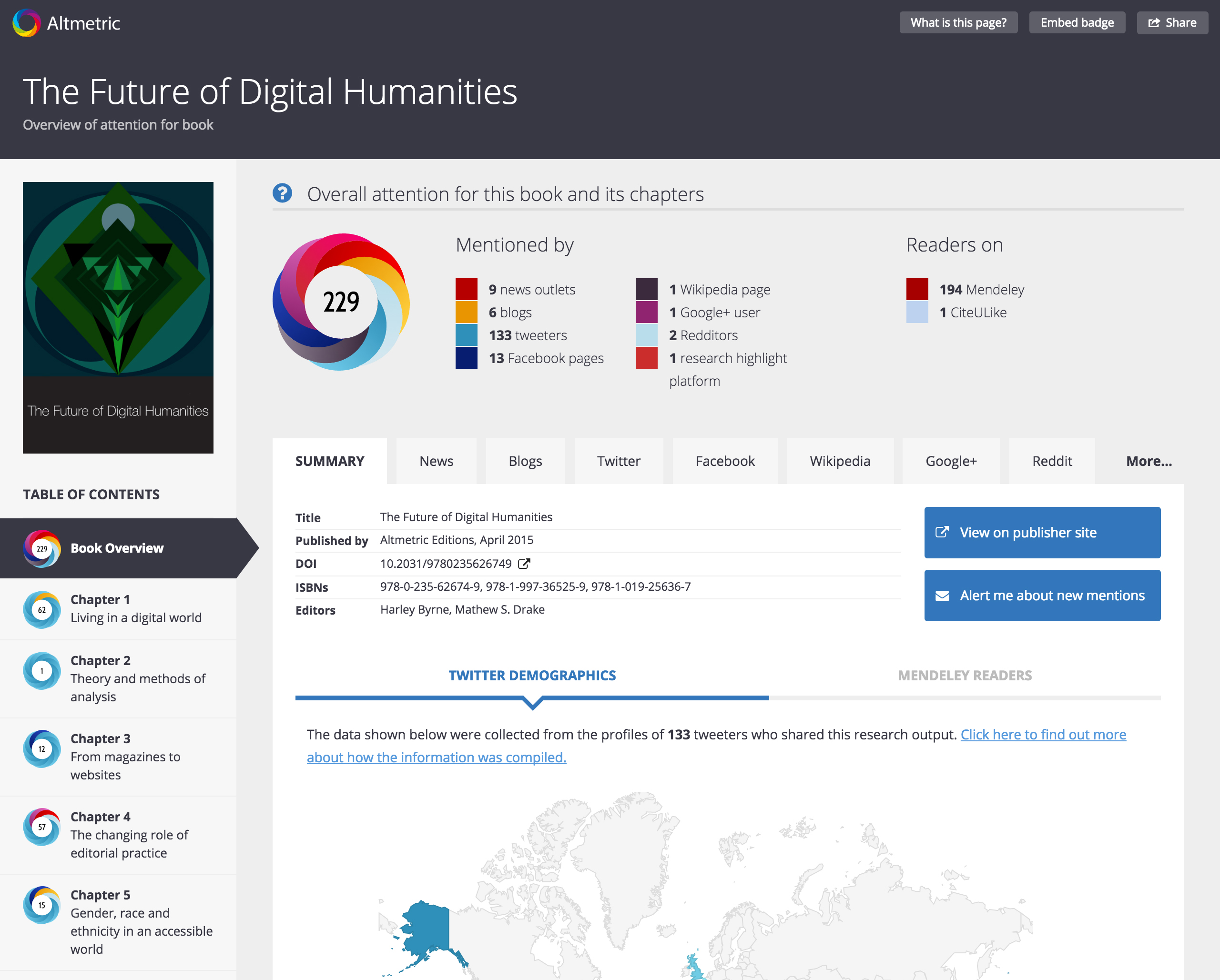 Altmetric data for books was added to the institutional version of the Explorer in April this year, giving users the ability to view an at-a-glance summary of the online attention for a published book and its individual chapters.

This breakthrough development also means that publishers are now able to add the Altmetric donut badges to their book and chapter pages.

Taylor & Frances were first to go live with this across their Routledge Handbooks Online Platform in Spring 2016. 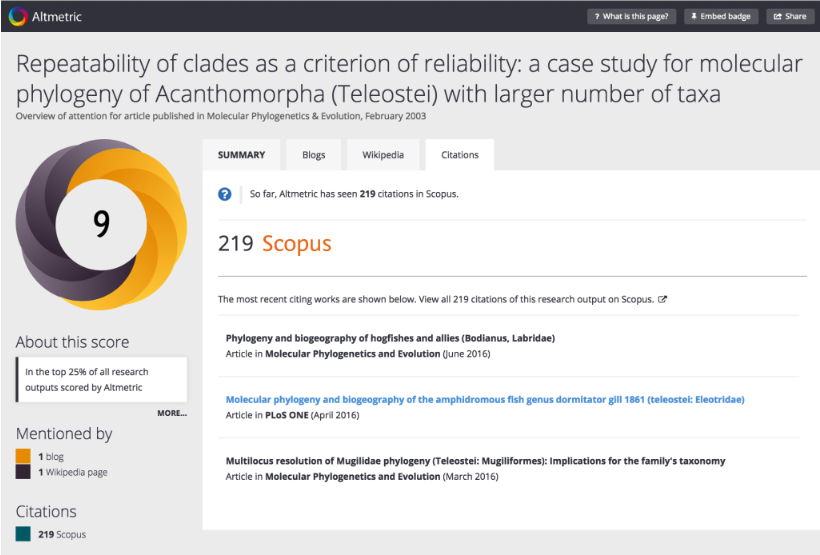 The addition of Scopus citation data in June enabled subscribers of the Institutional and Publisher platforms to view Scopus citation counts alongside altmetrics data for journal articles, making it easier to compare and contrast the academic and broader engagement. 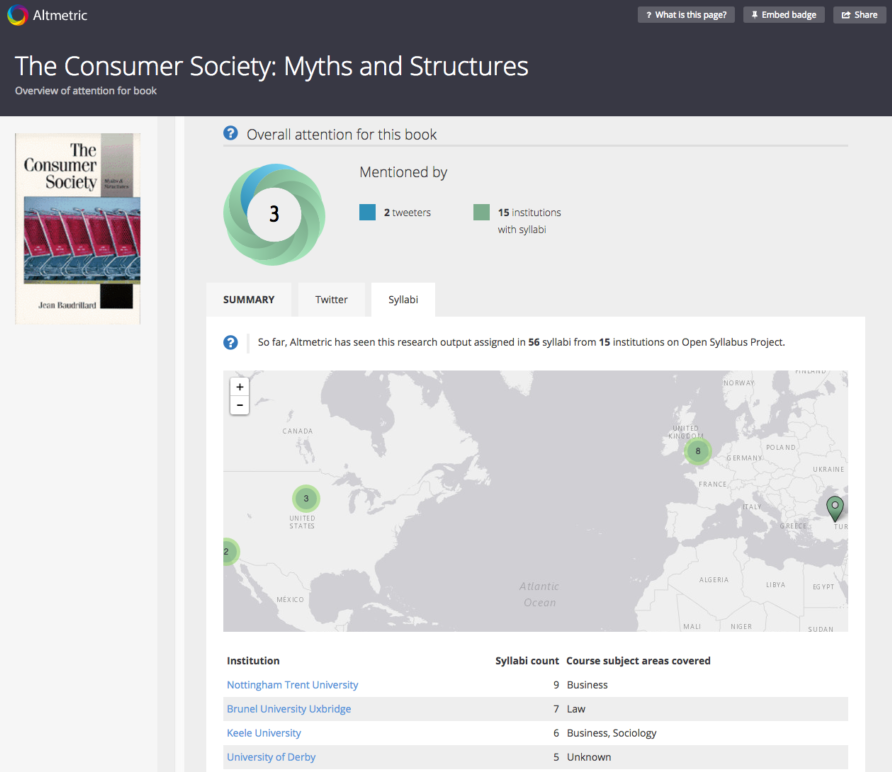 Syllabi information from over 4,000 research institutions across the globe was added in September. This integration with the Open Syllabus Project Data gives users the ability to see where books have been included in syllabi and used in teaching environments around the world.

At the time of the integration OSP’s Product Director Joe Karaganis commented, “One of our main aims in launching the Open Syllabus tool was to help authors, scholars and libraries get a better understanding of where books were having an influence in the classroom. We’re really pleased to see Altmetric integrating our data into their platform, adding another level of visibility to our efforts.”

A more recent integration of Altmetric badges was with the free online biomedical research database Europe PMC. Over 3 million articles currently display the badges, giving users of the database a collated record of the attention from a variety of sources. 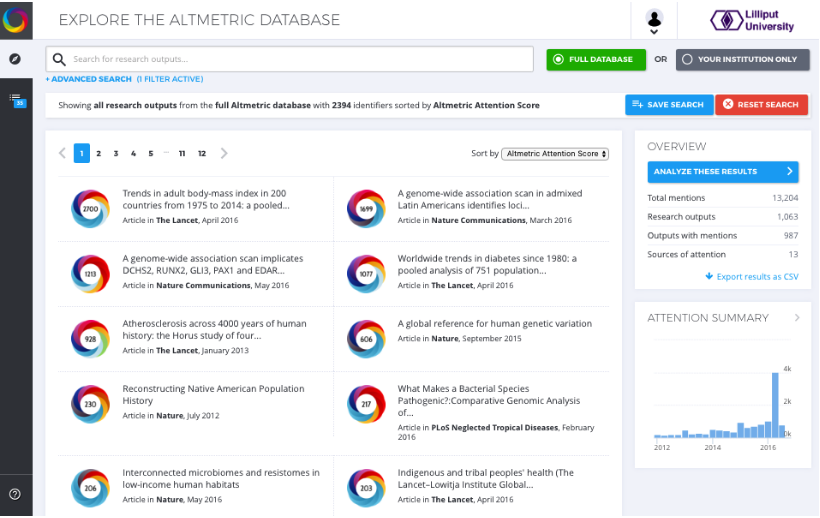 The biggest update yet to our Explorer for Institutions platform came in September of this year and offered user more powerful searching capabilities, new visualisations and the ability view and easily find and extract data to report on key achievements. The upgrade also included a brand new and more intuitive user interface to give an even better user experience.

We’ve come a long way since we started in 2011 and still look forward to finding new ways that we can support Publishers, Funders, Institutions and the research community!