Following our announcement earlier this year that Altmetric is now tracking attention for thousands of scholarly books we’ve been exploring in a lot more depth how books are shared and discussed online.

Although we’re already tracking ‘mentions’ to both the publisher and Google Books version of titles from news outlets, social networks, Wikipedia and many other online forums, our focus has now shifted to adding new sources of attention that align more specifically to the online activity surrounding books.

As a first step one of our development teams began to investigate how we might go about tracking book reviews – both in scholarly journals like CHOICE and in broader publication venues like the London Review of Books.

There are many challenges associated with this work that quickly became apparent – not least that often many books will be mentioned in one review, and that it is less common than you’d expect that the book’s ISBN (the unique identifier that we use to match the mention to the book) is actually mentioned or referenced anywhere in the reviews.

That said, we have completed some initial work that pave the way for expanding in this area in future. To begin with we’ve now started tracking book reviews from a handful of sources including the Bryn Mawr Classical Review, Chemistry World, the London Review of Books, the LSE Review of Books and newspapers like The Guardian and The Irish Times. We’ll be gradually ramping up the number of places we collect from over the next few months.

Visually speaking the big change you’ll notice is that we’ve added a new ‘book reviews’ tab to the details pages. The tab will appear when we’ve found a review for the book in one of the places we’re tracking as a source of reviews, and a new green colour has been added to the donut visualisation. Book reviews also contribute to the Altmetric Attention Score – using the same base weighting that we apply to news items. 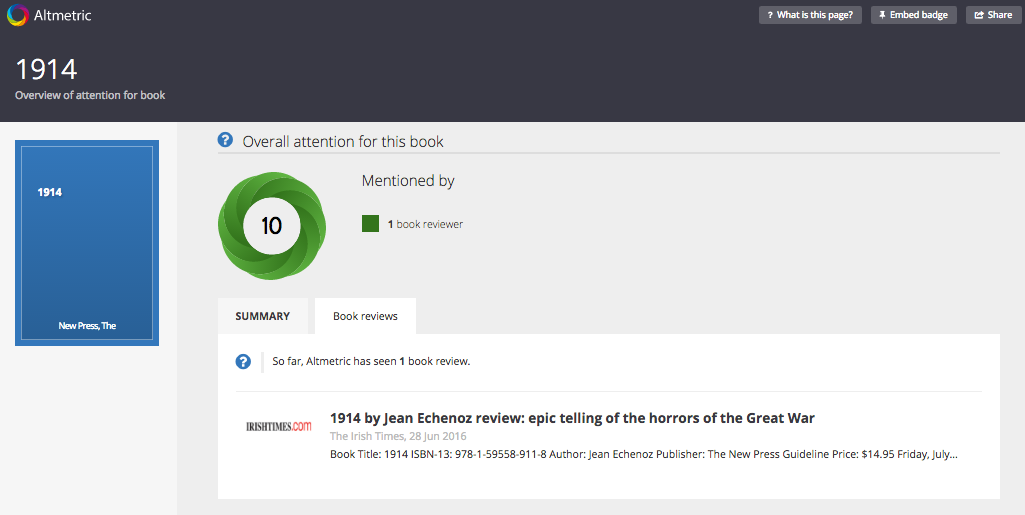 For now the volume of reviews we’re finding and able to match to articles is relatively low; with our current set of sources we’re seeing 30 or 40 reviews a week (in contrast, we see 20,000 or so news stories mentioning research outputs in the same timeframe).

We’ve finished our initial work into book reviews but will be planning to pick this up for further development in the short term. In the meantime we’ve also got plans to add some other book-specific attention sources, so stay tuned for news of those.

Take a look at our website to find out how and why we track and collate the online attention surrounding books, or get in touch if you’d like to learn more!