Sixty-six million years ago, three-quarters of the animal and plant species on Earth were wiped out. This mass extinction – known as the Cretaceous–Paleogene (K–Pg) extinction event – meant the end of the celebrities of the dinosaur world: Tyrannosaurus rex, Ankylosaurus and Triceratops were among the casualties.

It’s widely agreed that the cause of the extinction was a decades-long winter that made survival impossible for most species. Something blocked out the sun and plunged the planet into prolonged darkness that couldn’t sustain life. In recent decades, two theories have emerged to explain this: the atmosphere was filled with dust and other particles either due to an asteroid impact or extensive volcanic eruption.

But proving which one caused the extinction event is challenging. A new study in Proceedings of the National Academy of Sciences provides the first quantitative confirmation that the only plausible explanation for the extinction is the impact winter.

Lead author Dr. Alessandro Chiarenza carried out the research as part of his PhD at Imperial College London. He said: “I’m a naturalist, and because my main focus was the dinosaurs that lived during the Cretaceous, I inevitably got into the argument of how they went extinct and how climate may have played a role.” 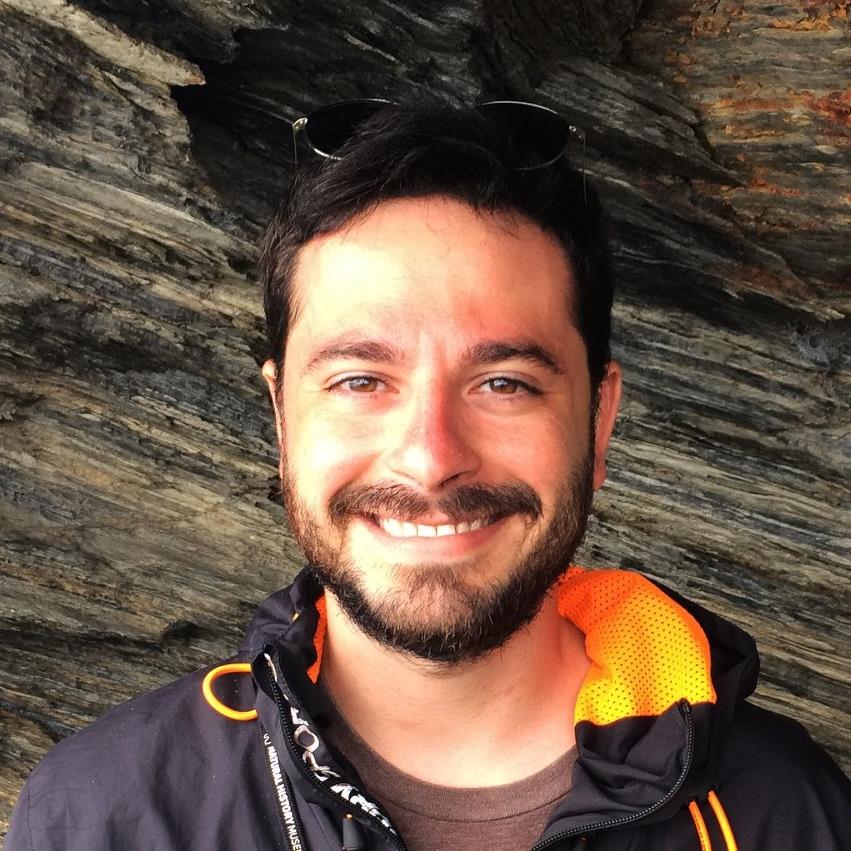 In 1980, the first paper was published suggesting that the cause of the mass extinction was an asteroid impact that resulted in the 180km-wide Chicxulub crater in today’s Yucatán Peninsula in the Gulf of Mexico. Since then, evidence supporting the theory that extensive volcanic eruptions – Deccan volcanism – caused the extinction has emerged. Decades of controversy followed, and the new paper contributes to putting the debate to rest.

“It’s even difficult today when we study modern ecosystems knowing exactly what is affecting what, so imagine doing that for 66 million years ago,” Dr. Chiarenza said. “Only recently with very highly sophisticated techniques of dating, do we have a way of accessing when these things were happening.”

These techniques involve computational methods, modeling and new ways of geochemically dating rocks via radioactive elements, and Dr. Chiarenza and his colleagues wanted to develop them further. “We have evidence supporting both of these events causing the mass extinction. And we know that there might have been some overlapping of these two big phenomena around the time of the extinction of the dinosaurs. So we asked: how can we quantitatively experiment with this? How can we develop a system to test these ideas?”

For his PhD, Dr. Chiarenza worked with paleo climate modelers, who use similar techniques to those that deliver our daily weather reports: physical computational models that reproduce the way the atmosphere behaves around the planet.

First, they created models of where the dinosaurs would have lived, based on fossil data. They combined mathematical modeling with information about environmental factors, such as rainfall and temperature, to map out what the global conditions would have been like. They could then predict how an asteroid impact and volcanic eruptions would have affected these conditions, and what areas – if any – would have been habitable.

They found that while the asteroid impact would have rendered the whole planet uninhabitable for dinosaurs, volcanism would have left behind some regions where dinosaurs could have survived.

“Every simulation that reproduced the asteroid impact caused a demise of the area of the dinosaurs,” Dr. Chiarenza said. “All the suitable areas where dinosaurs could live disappeared. On the other hand, whenever we reproduced even very extreme scenarios where Deccan volcanism was active and affecting the climate, we couldn’t find a similar response.”

“We started with an idea that probably a concert of these two events were acting together to cause deterioration of the environment at the end of the Cretaceous and eventually to the extinction. And it was actually a different story.”

Translating the story for a broader audience

It’s a story they wanted to share with the public. When Dr. Chiarenza was studying for his PhD at Imperial, he took courses on different aspects of science communication, so he knew that telling the story in more accessible terms could take it to a wider audience. It helps that he’s a paleontologist, he says: as a “sexy science,” there’s a wealth of popular science materials to enjoy, including books, magazines and documentaries.

“The major effort is translating the technical information about very hardcore geology, computational methods, and paleontology and evolution, into a language that can be interesting and appealing for everyone,” he said.

He was already familiar with the system in place at Imperial, so when he was ready to share the study, he contacted the press office and worked with Hayley Dunning to get the news out. He also worked with a paleoartist, Fabio Manucci, to reproduce an image that represented the asteroid impact. 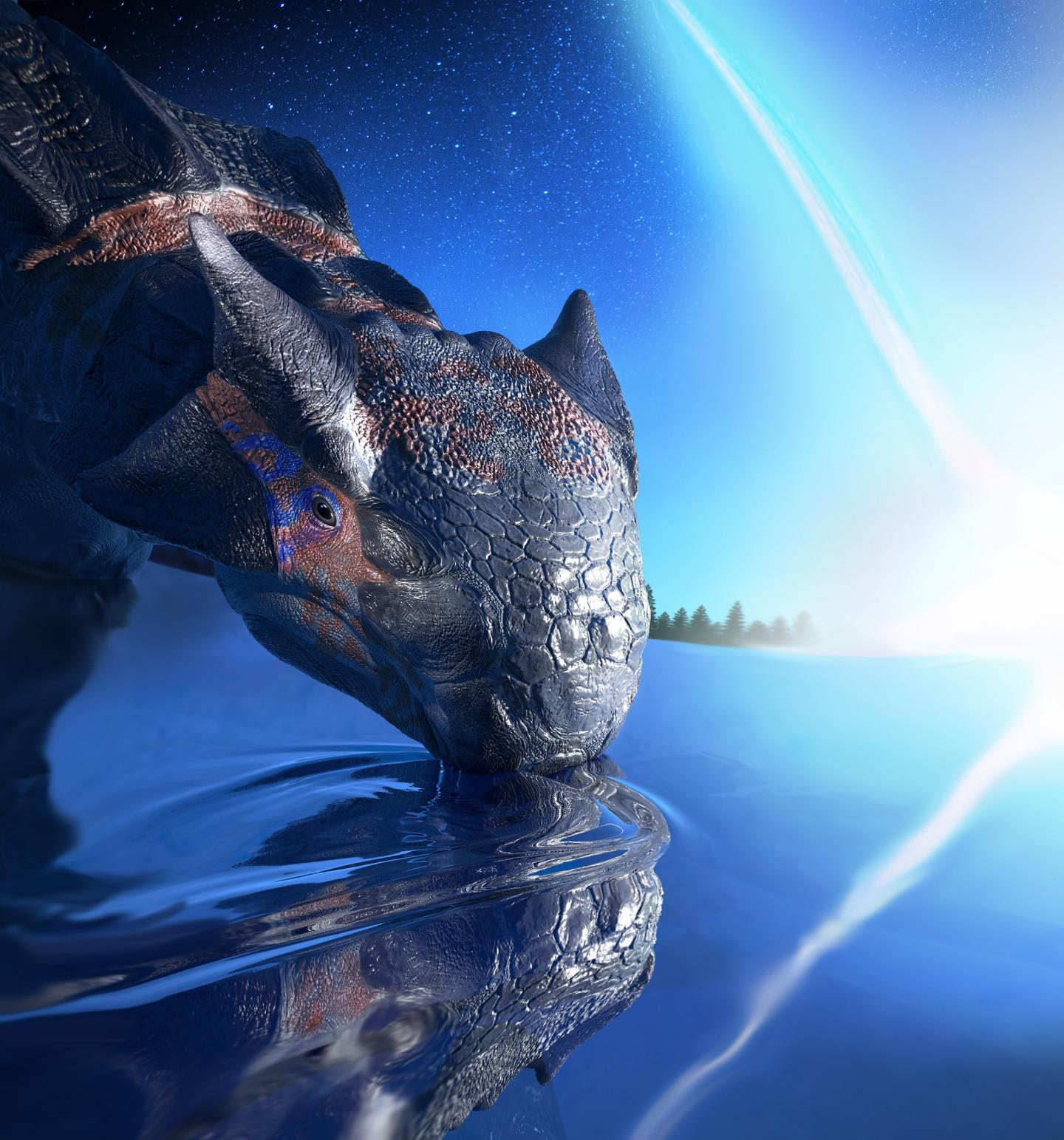 An individual of Ankylosaurus magniventris, a large armored dinosaur species, witnesses the impact of an asteroid, falling on the Yucatán peninsula 66 million years ago. Credit: Fabio Manucci

They chose an Ankylosaurus, which lived together with T. rex and Triceratops, but is never shown on these kinds of images. They studied footage of meteor strikes to come up with a recreation that is as scientifically solid as possible showing the event.

“You need to be aware of the uncertainties that are in play both from the scientific side, but also from the pure epistemological side. So the fact that we’re talking about something unraveling so far back in time, we have to use all our theoretical knowledge to try to bridge this gap, by putting together knowledge from different systems. Of course, there is the known unknown – we may never be able to properly tackle it unless we build a time machine sometime in the future.”

The Imperial press office issued a press release along with the image, and it was a hit: with 275 news articles around the world, the paper has an Altmetric attention score of over 2,500. Dr. Chiarenza and his colleague Alexander Farnsworth, a paleoclimatologist at the University of Bristol who co-led the study, spent ten days fielding interviews with the press.

One of the key messages he wants to share with the public is that paleontology is not just about museums: it gives us a better understanding of our world and where it’s heading.

“We have this popular image of the paleontologist, this sort of Indiana Jones figure that goes into the desert, in the dust, goes to the museum, and that’s it. What we really do is disentangling the history of life, from the very origin to now, and we use whatever is left as a tangible trace on the planet of these life forms, which are fossils. By knowing the story, by understanding what happened, we may be able to predict how that might happen in the future.”

“If you have someone that you know is very good at this, and works in your department or your institution, get in touch as soon as you can, at least to get a feeling of how they might tackle the outreach. Eventually the people you’re going to work with are going to determine the success of these pieces. As paleontologists, we are very lucky to have a network of skilled artists that produce these amazing visuals on historic life. If you’re a geophysicist or an astronomer or a medical researcher, always try to engage with artists who can help you turn words into visuals. This will probably massively boost the success of the story.”