The following post was written by Amy Rees, Customer and Sales Support Specialist at Altmetric, and was originally published on the London School of Hygiene & Tropical Medicine’s blog on the 10th August 2016.

In this blog post we discuss the articles published in Health Policy and Planning with the highest Altmetric Attention Scores in 2015 and 2016. The attention score is a weighted count of all of the online attention an item has received, and aims to provide an indicator of the likely reach of that attention. We’ll explore the online mentions and coverage that each article has received and look at how and why that differs.

It is worth noting that Altmetric strongly suggests that the attention score not be viewed in isolation, and that it is always important to dig deeper to read the underlying qualitative attention and consider the field in which the paper is published.

The cost of not breastfeeding in Southeast Asia

Published in 2016, “The cost of not breastfeeding in Southeast Asia” is a multi-country assessment of breastfeeding rates and their association to indicators of wellness. The researchers found a srong link between breastfeeding and a decline in infant mortality,
higher IQs in children, and eventually, higher potential earnings.

By reviewing the Altmetric details page for this article (the collated record of all of the online attention), we can see that it received a lot of Twitter attention from a wide range of users, drawing attention to the emotional impact and feelings regarding breastfeeding. Interestingly, there was a lot of attention from Twitter users with smaller followings (of <100). There was also attention from Nicholas Kristof, a NY Times columnist. His tweet about the topic led to a lot of retweets and attention as he has 1.7 million Twitter followers. This is a good way to see the power of key influencers: one popular user can have a big impact on the amount of attention an article receives.

The authors of this recently published paper (May 2016) sought to examine the role of gender and gender identity with regards to the seeking and receiving of healthcare. The
paper suggests that health systems are being treated as gender neutral, when gender is in fact an inherent factor in health care.

Attention for this article was largely on Twitter and as you can see from our Twitter map, the attention was global. There is significant activity in Sweden and India, and actually a higher volume of Twitter mentions from South Africa and India than from the United States. One might argue that this shows the universality of challenges regarding gender identity and medical treatment.

This paper was only published on June 16th of this year and has already received a lot of attention – with new mentions still appearing. William L. Hamilton, Cormac Doyle, Mycroft Halliwell-Ewen, and Gabriel Lambert conclude that, based on their evaluation, there is a strong need to a centralised reporting process to help address the danger of falsified medicines.

As with the previous article there is quite widespread international coverage with tweets from Ghana, Switzerland, Jamaica, Nigeria, and Brazil. There also two people on citeulike that have saved the paper, perhaps indicating that there is a balance of academics and the general public who are reading this research.

An evaluation of early countermeasures to reduce the risk of internal radiation exposure after the Fukushima nuclear incident in Japan.

This paper discusses the nuclear incident in Japan and evaluates the best countermeasures for addressing radiation exposure. These measures are viewed within the framework of the effect on long-term health. The study was believed to be the first of its kind following the incident.

Twitter was the main source of attention for this paper. It is perhaps no surprise that the majority of recognised locations for tweeters was Japan. That said, more than 60% of tweeters did not have geolocation (this data is pulled from the location the users themselves report in their Twitter profiles). Further, 97% of tweeters were classified as members of the public, instead of science communicators or practitioners. This abundance of public interest is perhaps due to the divisive feelings regarding nuclear power and how recently after the incident the article was published.

Attention for this paper appeared in four different news sources. The Conversation published a piece, written by the authors, that provides a succinct overview of their study from methodology to conclusion. The piece was then re-published in the African news outlet allAfrica, as well as being featured in MedicalXpress, and the Health Medicine Network. 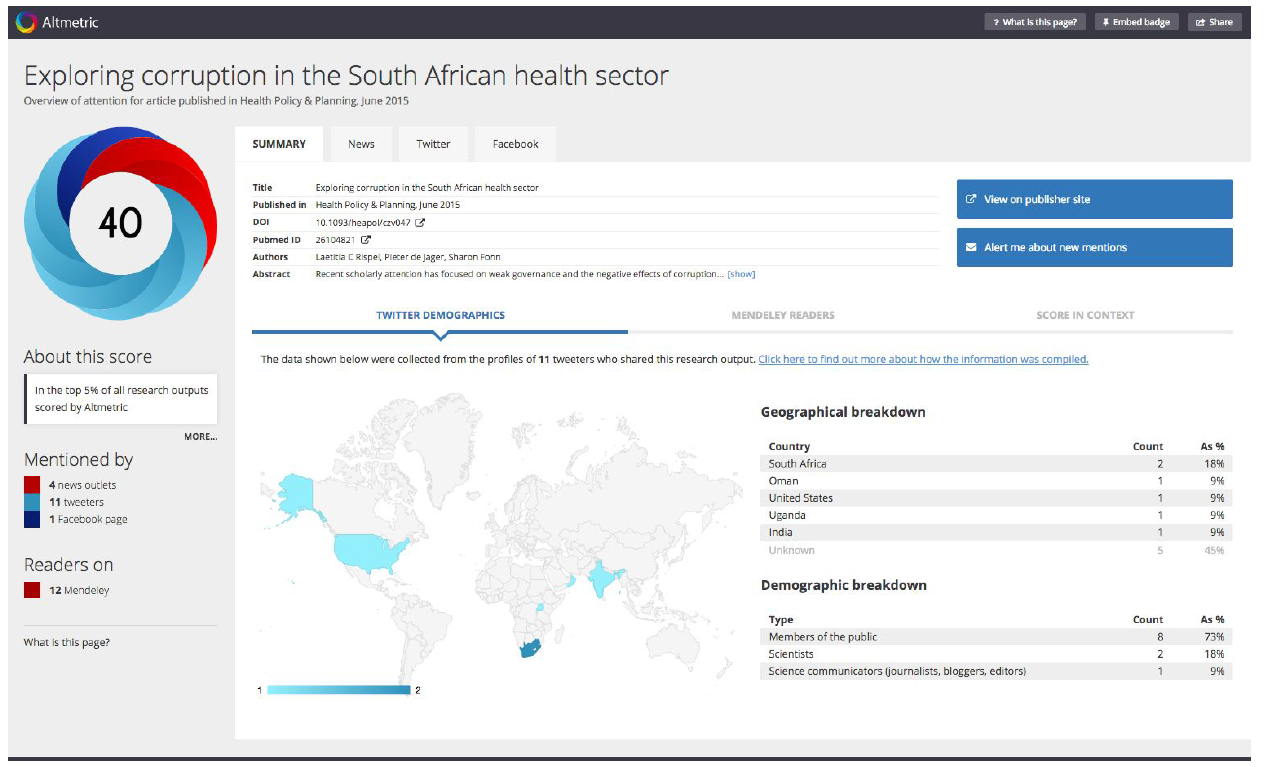 ‘The government cannot do it all alone’: realist analysis of the minutes of community health committee meetings in Nigeria

Published in 2015 this unique paper dives into the minutes of Nigerian community health committee meetings. The researchers draw attention to the community benefit of having these health committees which allow local opinions, understandings, and values to be factored into health care decisions.

Attention for this paper was captured from Twitter and Facebook. In the case of Facebook the article was shared by a South African based group, Talking Heads, that seeks to highlight research being produced by African contributors. They cross-posted the link to the article between Facebook and Twitter, resulting in the mentions from both sources appearing on the details page.

Attention associated with Health Policy and Planning is somewhat unique. Many of the authors for these papers are affiliated with institutions based in the United States and United Kingdom, but they also feature collaborators from several African countries (e.g Nigeria, Uganda, South Africa). This broad range of authors and affiliated universities means that there is the possibility for a broader network of people to share the work, resulting in quite diverse coverage beyond simply the mainstream sources of Western media.

Interacting with the Altmetric Attention Score for these six papers, and subsequently their details pages, is an opportunity to consider the way scholarly outputs are published and disseminated in different areas of the world.