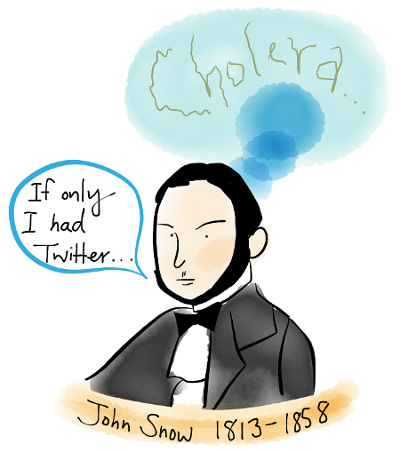 What kinds of research did people talk about in April?  In the past month, social media was abuzz with conversations about the life sciences, covering current trends as well as topics of a historical nature. Here is another Interactions monthly wrap-up featuring a selection of 5 new and popular articles in the Altmetric database. Data are accurate as of 30 April 2013.

1. “Internal radiocesium contamination of adults and children in Fukushima 7 to 20 months after the Fukushima NPP accident as measured by extensive whole-body-counter surveys”
Published on 11 April in Proceedings of the Japan Academy, Series B

This study, carried out by Japanese researchers in the wake of the collapse of the Fukushima Dai-ichi Nuclear Power Plant, found that “internal exposure levels of [Fukushima] residents are much lower than estimated”. The paper became April’s highest scoring research article after it was shared by over 1000 users, who were mostly based in Japan (91% of tweeters were in Japan; see Altmetric details). The altmetrics for this particular paper echoed the trends I observed previously, once again indicating particularly widespread usage of social media by the general public to share scientific information related to the Fukushima disaster.

2. “An Introduction to Social Media for Scientists”
Published on 23 April in PLOS Biology

For some tweeters, sharing an article about the benefits of social media through social media felt a bit like “preaching to the choir”, but this new paper in PLOS Biology was still well-received as an excellent resource for scientifically-minded social media newbies. The comprehensive but concise paper covered a lot of ground, from existing blogging and social media services to the benefits of online professional networking.

It’s only been a week since publication, but the paper has already become the highest scoring article in PLOS Biology (see Altmetric details). While the paper has been extremely popular with scientists on Twitter (37% of tweeters), it has also been featured in a few science communication blogs, including one post written by a co-author of the paper. But even though the visibility of paper is extremely high on social media platforms, how can it effectively reach academics who aren’t already using these services? A simple suggestion was made by blogger Grant Jacobs:

“Leave a copy on the department coffee table for those less confident about use of social media in science, perhaps?”

On the 25th April 2013, people from all over the world celebrated “DNA Day” to mark the anniversary of the discovery of DNA’s structure. In honour of DNA day, the landmark 1953 Nature paper in which Watson and Crick first proposed the structure of DNA was widely shared online using the hashtags #DNADay and #DNA60. Even though it was published 60 years ago, Watson and Crick’s paper went viral on the 25th of April 2013  (see Altmetric details), and attention was boosted by tweets such as this one from Nature senior editor Noah Gray (which has been re-tweeted over 800 times). Although this paper was shared to mark a special occasion, the celebrations helped to expose younger scientists to a paper that made history, while also giving biologists a valuable reminder of how far their field has progressed in the last 60 years.

4. “Neural Decoding of Visual Imagery During Sleep”
Published on 4 April in Science

It seems that many popular neuroscience discoveries are sounding increasingly like stories out of science fiction. Take this one for instance: Japanese researchers recently published a paper in Science in which they demonstrated that the images seen while dreaming can be “decoded” using fMRI. This intriguing new study was mentioned in a diverse number of online sources, including Twitter, Facebook, Google+, news reports, and videos (see Altmetric details). In addition, the paper sparked the imagination of the blogosphere; the paper was mentioned in 13 different blog posts, all of which describe the study and its limitations in detail. Notable posts include one from Brain Box and the Naked Scientists (accompanied by a podcast).

5. “John Snow”
Published on 13 April in The Lancet

The last paper on this High Five list is an unusual one: it’s an apology from The Lancet about Dr. John Snow‘s obituary that was published in 1858. The original obituary, which was written by The Lancet‘s founding editor Thomas Wakley, posthumously snubbed Dr. Snow by skipping over his notable achievements. Notably, Dr. Snow had been responsible for identifying the source of water contamination (the Broad Street pump) that had led to an 1854 outbreak of cholera in London.

News about the apology spread after it was featured in Boing Boing. Tweeters were the most vocal about their appreciation for The Lancet‘s belated recognition of Dr. Snow, describing the act of apology as “wonderful”, “amazing”, and “brilliant” (see Altmetric details).

Love this: “an unduly prolonged period of reflection” – @thelancet apologises to John Snow after 155 years: thelancet.com/journals/lance…

[...] Attention WordPress bloggers! Our developer Will has just created an awesome and free Altmetric WordPress plugin that allows you to insert Altmetric donuts and badges into any blog post. Now you can easily insert a colourful donut into your text, just as it’s done on the Interactions posts of the Altmetric blog. For example, the WordPress plugin was recently used to display donuts in the April High Five. [...]

[...] series on the blog highlights the top of the attention rankings: the papers that went viral, the papers that were popular in a given month, etc. For this week’s Interactions, I decided to profile the altmetrics of 3 interesting [...]