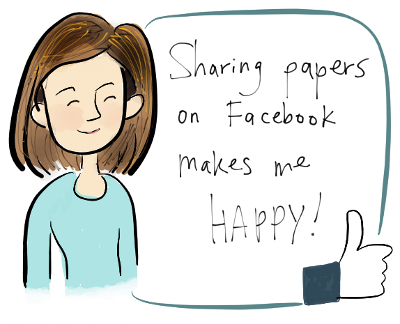 What kinds of research did people talk about in August? This time, the papers were all about being human, and the things in our world (including Facebook and climate change!) that affect us. Here’s another monthly wrap-up of 5 new and popular articles picked from the Altmetric database. Data are accurate as of 31 August 2013.

1. Facebook Use Predicts Declines in Subjective Well-Being in Young Adults
Published on 14 August 2013 in PLOS ONE

This month, a new study that examined the influence of Facebook on “subjective well-being” (encompassing one’s mood and life satisfaction) concluded that Facebook may not be beneficial for the well-being of young adults. (The results also suggested that real-life interactions did not undermine the participants’ sense of well-being.) However, the authors acknowledged that while the effect of Facebook on subjective well-being was statistically significant, the effect size was small. Moreover, the number of participants (82) used in the study was relatively low.

Small sample size or not, the mainstream media still pounced on the story, producing depressing headlines such as “Study: Using Facebook can make you sad” (CNN), “Facebook is indeed a downer, another study suggests” (NBC News), and “Facebook use ‘makes people feel worse about themselves'” (BBC). Further negativity showed up on social media, including through posts on Facebook itself; Altmetric saw 174 public Facebook posts about the paper (see Altmetric details). Several bloggers mused about the topic, and provided some thought-provoking alternative views (see this post in the Skeptoid) and some good points about the “ethics of bragging” (see this post in the New Apps blog).

The story was met with criticism in 2 news outlets. An article in The Verge blasted the mainstream media for sensationalising the results, pointing out that the study had too small of a sample size to be representative of Facebook’s 1 billion users. The Verge also argued that the complex nature of “Facebook use” wasn’t properly assessed in the PLOS ONE study, saying that the subjects hadn’t been asked “if they were surfing the news feed, playing Farmville, chatting with friends or cyberstalking their exes — activities that could elicit very different kinds of reactions”. (And they certainly didn’t ask subjects if they were sharing scholarly papers, which probably isn’t the most stressful of activities. ;-)) An article in The Atlantic also hinted at the importance of what Facebook is being used for, saying that “Facebook probably isn’t making you lonely or unhappy … unless you’re using it to replace real interactions and things that give life meaning.”

2. Quantifying the Influence of Climate on Human Conflict
Published on 1 August 2013 in Science

Do shifts in climate influence conflicts in human societies? According to a new paper in Science, which showed results from a meta-analysis of 60 studies (collectively spanning many millennia), warmer temperatures and increased precipitation increase the risks of conflict between groups and between individuals.

The methods and results of the paper were subject to quite a lot of controversy, and as such, the paper immediately received a huge amount of attention after publication. Mainstream media, blogs, and social media erupted with comments, both positive and negative (see Altmetric details). On Twitter, there as a flurry of sharing and re-tweeting of a link to the paper after Professor Gary King (a social scientist and statistician from Harvard University) tweeted the following to his 17,400+ followers:

The overwhelming amount of attention paid to the paper quickly prompted the authors to step in and address various issues through their personal blogs: first author Solomon Hsiang wrote on his blog “Please read our paper on climate and human conflict carefully”, and then linked to a comprehensive blog post (by second author Marshall Burke) which addressed various misinterpretations of the paper’s results, as well as the negative comments that the paper had received.

3. Glucose Levels and Risk of Dementia
Published on 8 August 2013 in New England Journal of Medicine

A new study published in the NEJM reported that elevated glucose levels (even in non-diabetics) is an important risk factor in the development of dementia.

This crucial bit of health information was widely circulated on social media, with posts from neurologist David Perlmutter and the NEJM Twitter account (whose tweet about the paper received over 100 re-tweets) (see Altmetric details). A huge amount of news coverage followed the publication of the article, with reports from major outlets such as Reuters, The Daily Beast, and USA Today. Oddly enough, the attention was restricted to the news and social media, and bloggers showed little interest in the story – Altmetric only picked up on 1 blog post that mentioned the article.

4. Psychedelics and Mental Health: A Population Study
Published on 19 August 2013 in PLOS ONE

Psychedelic drugs such as LSD, psilocybin, and mescaline have been used by over 30 million people in the United States. In a new paper published in PLOS ONE, researchers surveyed a sample of the US population (amounting to 130,152 respondents) and found, rather surprisingly, that psychedelic drug use was not associated with any current mental health problems.

Drug-related papers, particularly those pertaining to marijuana, tend to sit pretty high up in the Altmetric attention rankings, and this paper was no different. In a short period of time, the paper became hugely popular on social media (especially after this tweet by user Abby Martin appeared), news media, and mainstream blogs. However, very little of the attention paid to the study was academically-oriented (see Altmetric details). At the time that this post was written, there weren’t any particularly deep discussions about the paper in any science blogs that Altmetric tracks.

5. Surge of neurophysiological coherence and connectivity in the dying brain
Published on 12 August 2013 in PNAS

This paper, published in PNAS, is the only one in this month’s High Five that involved non-humans, but it understandably received much attention because it probed into a fascinating phenomenon that many humans have claimed to have gone through: “near-death experiences”. In the study, the electrical activity in the brains of rats was measured as the animals were undergoing cardiac arrest. Contrary to their expectations, the researchers found that there was a “surge” of high-frequency brain activity, which exceeded the levels that are typically seen in normal consciousness. This heightened brain activity could be analogous to the near-death experiences reported by humans.

The paper received a lot of attention from the press (see reports on BBC, National Geographic, and The New York Times) and was also widely covered in mainstream blogs (see posts on The Guardian, NPR, io9, and Surprising Science) (see Altmetric details). On Twitter, several members of the general public became interested in the paper for spiritual reasons, referring to “the light at the end of the tunnel”. The paper was also popular in academic circles – detailed blog posts describing the methodology, results, and implications of the study appeared in Brain Box and The Neurocritic. Notably, the paper was even recommended on F1000 Prime.

MT @altmetric: Some weekend reading for you! Find out about the attention paid to the 5 most popular papers in August http://t.co/i729u8KsuC

Which were the top talked about science papers in August? @portablebrain's latest @altmetric post http://t.co/eDn8jpeUlZ

It's been a pretty awesome summer of science, so gimme an #altmetrics high five! http://t.co/ET173fLmDP

The 5 most popular scholarly papers from the month of August chosen via @altmetric index. http://t.co/UGoYnj9Blf #research

Monthly wrap up from @altmetric on the most talked about research in Aug? Inc Facebook &climate change http://t.co/ZfLwjCwWN4 @portablebrain