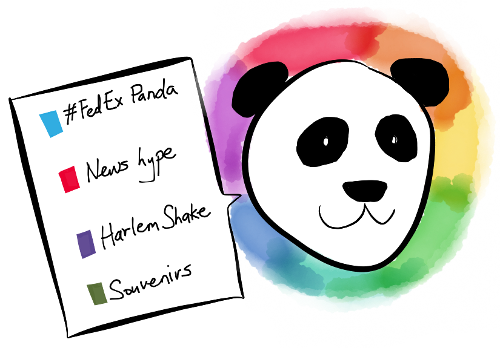 Over the past month, Canadian news media outlets have been buzzing about 2 giant pandas from Chongqing Zoo in China, who finally arrived last Monday at the Toronto Zoo. Of course, the pandas have not only been enthusiastically promoted online by news outlets, but also in panda-themed paraphernalia, the Toronto Zoo’s Harlem Shake video, and photographic tweets about the panda shipment by FedEx Canada.

Was all this attention reflective of the public’s true enthusiasm for pandas? Certainly, pandas seem to be perceived differently by the public than many other rare animals – for example, if the Toronto Zoo received a pair of proboscis monkeys (also endangered), media outlets probably wouldn’t hype up the news as much. Just as psychologists noticed a “seductive allure of neuroscience words”, there might be a similar “seductive allure” of giant pandas… at least for the media. This perceived excitement about pandas led the CBC to publish a news article with the headline “Why are we fascinated by pandas?” However, the CBC seems to have inadvertently offended many readers, who were confident that it was the media that was the most fascinated by pandas, not the average person.

Pandas do seem to have a special kind of charm though, and showcasing pandas can boost the number of visitors and increase revenue for a zoo. A 2012 tourism economic impact assessment of the UK Giant Panda project in the Edinburgh Zoo found that “the Giant Panda Project has the potential to support a substantial increase in tourism revenue both for the zoo itself, and for the economies of Edinburgh and Scotland as a whole.” Clearly, the trend is expected to hold true for the new pandas in Canada.

So why are pandas seemingly so popular? The aforementioned CBC news article cited a few possible reasons why pandas are adored, including their cute appearance and scarcity in the wild, both of which help to bring “prestige” to the zoos. It was this last point which caught my attention, as the CBC quoted author Henry Nicholls as saying that pandas can “boost a zoo’s reputation as a research institution”.

If pandas do have a strong influence on zoo visitors and public perception of a zoo’s prestige as a research institution, then how do they fare when they’re the subjects of scholarly papers?

The altmetrics of giant panda research

I was curious about the conversations that people have been having about panda-related papers, so I searched in the Altmetric database for all papers with “panda” or “pandas” in the title. Here’s a screenshot from the Altmetric Explorer showing the top 8 panda-themed articles ranked by attention:

Surprisingly, papers about pandas weren’t as overwhelmingly popular as I’d assumed they’d be, given the media hype that surrounds the animals themselves. (This attention is far less than is typically received by papers about domesticated cats and dogs.)

The highest Altmetric score was 169, indicating that the paper received a great deal of attention – however, keep in mind that most “viral” papers typically have much higher scores. Even the 2nd highest scoring paper, which was covered in 4 different news outlets (including the New York Times and National Geographic) and mentioned in PLOS blog, only had a score of 91.

The most popular panda-themed article in our database was titled “Remains of Holocene giant pandas from Jiangdong Mountain (Yunnan, China) and their relevance to the evolution of quaternary environments in south-western China” (by Jablonski et al. and published in Historical Biology). A quick look at the actual conversations about the paper reveal that it was Figure 7, not the research content of the paper, that attracted all of the attention. Figure 7 is a multi-paneled drawing that shows a giant panda innocently walking through a thicket of lush bamboo, and then falling down a sinkhole to its doom.

The serious scientific prose, combined with the morbid and unusual situation depicted in the figure, captured the attention of the blogosphere and the Twitterverse. United Academics magazine described the figure as “distressing though hilarious”, and io9 published a post about the figure entitled “One of the best figures to ever grace a peer-reviewed scientific journal (warning: panda demise)”.

It seems, then, that even for the most popular panda-related paper, nobody was actually talking about the study or pandas in any specific sense:

Brilliant! More papers should have figures like this! From tandfonline.com/doi/pdf/10.108… twitter.com/DeepFriedDNA/s…

Not so alluring after all?

In the context of scholarly articles, the mere mention of a panda generally doesn’t seem to be enough to spark conversations. Apparently, however, the right promotional tactics (e.g., the cartoon depiction of a panda’s demise) can help a panda-themed paper to attract quite a bit of attention. Maybe this indicates that the seductive allure of pandas isn’t real – after all, as some CBC readers argued, many people aren’t as fascinated with pandas as the media has claimed. If we were all drawn to pandas irrespective of advertising, then perhaps we’d all immediately just flock straight to the panda enclosure at the zoo. However, zoos with pandas do have to try hard to get the word out in order to attract more visitors and sell panda-themed souvenirs. So until we see the Harlem Shake being used to promote scientific articles, perhaps the seductive allure of pandas only rings true for zoo management and the mainstream media. And as cute as pandas are, their alluring effects seem to end at the scholarly article.