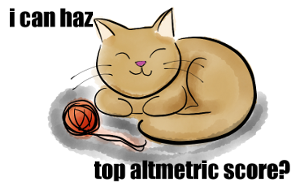 Last week, a Nature News & Comment article with the headline “Mice have massage neurons” introduced the subject of a new Nature study in an unusual way: with a video of LOLcats. The study in question was featured on the cover of the 31 January issue of Nature and found that a particular subset of sensory neurons innervating the hairy skin of mice was only responsive to gentle stroking motions.

The fascinating neuroscience in the study garnered much online attention (see Altmetric score details), and an approximately equal proportion of tweets originated from scientists (46%) and members of the general public (48%). However, even though the LOLcats video was about a mouse study, the online community’s obsession with cats managed to influence the tweeter demographics for the Nature News & Comment article (see Altmetric score details): most tweeters were members of the general public (60%), and the majority of tweets specifically mentioned the LOLcat video:

The most amazing use of LOLcats to explain a new scientific discovery that I’ve ever seen: nature.com/news/mice-have… (via @naturenews)

The universal appeal of pets

Companion animals have such widespread appeal and popularity that one might expect most papers about cats and/or dogs to receive a great deal of attention, even they happen to be highly-specific or technical. Complicated analyses don’t seem to dissuade generalist readers as long as the prevailing message is clear and appealing, but not every interesting paper that concerns cats and/or dogs will get a lot of online attention; specifically, a large number of articles that fall under veterinary medicine are not widely shared and often have low Altmetric scores. (One notable exception to this is an article in the Journal of Veterinary Diagnostic Investigation entitled “Thallium toxicosis in a dog consequent to ingestion of Mycoplasma agar plates”, which details the unfortunate plight of a dog that ate a scientist’s experiment; check out the amusing Altmetric details for the paper.)

However, trends in article sharing for pet-related topics do emerge: 1) people are interested in articles pertaining to cats, dogs, or both; and 2) the articles typically relate to either human well-being and behavioural interactions with animals or to the natural history and biological characteristics of these domestic pets.

You, me, and Poochie

Many pet owners might tell you that their pets are funny and fascinating, but most of all, they’re family. But how does having a pet influence human health and well-being? Research articles that examine some kind of human-pet interaction tend to be quite popular, and some are shared in order to extol the virtues of owning a pet. One popular article in Pediatrics entitled “Respiratory Tract Illnesses During the First Year of Life: Effect of Dog and Cat Contacts” found that infants who were in frequent contact with animals, particularly dogs, tended to have fewer respiratory symptoms and infections during their first year. Tweeters were excited about the findings – it was easy to spot the dog lovers! (See Altmetric details.)

My dad, a vet, would be shouting yippee to hear that having a dog means better health for infants (cats less so): pediatrics.aappublications.org/cgi/content/lo…

More evidence of the benefits of our companionship with dogs:)pediatrics.aappublications.org/content/early/…

Interest in interactions between humans and animals also encompasses the realm of mental health, as shown by the alt-metrics of another study, published in the Journal of Personality and Social Psychology, which was highly shared because it highlighted social benefits of animal companionship. This study received a lot of attention in the blogosphere (see Altmetric details), and was summarised particularly well by Melanie Tennenbaum. Other popular studies that are fall under the general category of human-animal behavioural interactions pertain mostly to dog-related topics, including dogs’ gazes and their abilities to follow human communication (see Altmetric details) and contagious yawning between humans and dogs (see Altmetric details).

Pet lovers might be motivated to share research about dogs and cats for practical reasons (e.g., health information), but much of the time, it’s curiosity that takes hold, prompting people to discuss basic research. Notably, when it comes to pet-related papers in the natural history/biological characteristics category, news media and blogs tend to help drive Altmetric scores up. For instance, the top article about cats in the Altmetric database was published last week in Nature Communications (“The impact of free-ranging domestic cats on wildlife of the United States”). The study spawned some catchy news headlines, such as “Hello Kitty! Please Don’t Kill Me!” (National Geographic) and “Killer Kitties? Cats Kill Billions Of Creatures Every Year” (NPR), and was the subject of numerous blog posts (see Altmetric details).

Finally, one of the most highly-discussed categories of pet-related research is genetics and evolution. Detailed genetic analyses of cats and dogs have revealed new insights into the animals’ evolutionary histories, providing clues about their paths to domestication. A recent study in Science about the genetics of cat fur pigmentation received much news and blog coverage, as did a new Nature paper entitled “The genomic signature of dog domestication reveals adaptation to a starch-rich diet”, which is currently one of the most popular dog-related articles in the Altmetric database. Numerous news reports and blog posts boosted the visibility of the Nature dog paper (see Altmetric details), with notable coverage from BBC News and the blog Phenomena: Only Human. Tweeters were mainly members of the general public (57%), but many were also scientists (38%).

3 Responses to “Interactions: Cats and Dogs”

[...] C fibres that detect massage-like stroking of hairy skin in vivo” (which we talked about in last week’s Interactions post). The FOX News article contains a few links, but none of these direct to the actual research paper. [...]

[...] Cats and Dogs: “The impact of free-ranging domestic cats on wildlife of the United States” (Nature Communications) [...]