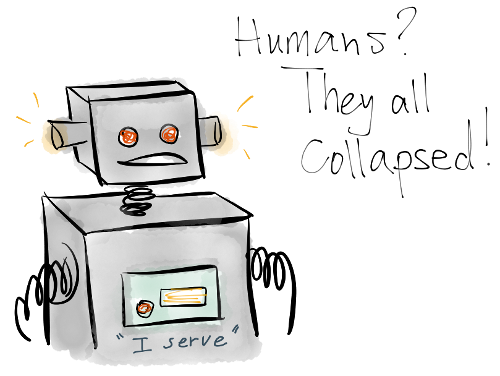 For this week’s Interactions, I took a peek at a particularly expansive island of conversation connected to a recent perspective piece in the Proceedings of the Royal Society B by Stanford University population biologists Paul R. Ehrlich (see his faculty webpage) and Anne H. Ehrlich.

Grimly titled “Can a collapse of global civilization be avoided?”, this perspective paper described the authors’ views on the potential causes of human decline. The authors also provided their recommendations on how to prevent what they termed a global “collapse” of human civilisation, touching upon various politically-charged issues, including women’s rights and climate change.

Given that the Ehrlichs were already well-known for their 1968 book The Population Bomb, it wasn’t surprising that, in the 2 weeks that followed the publication of this Proceedings of the Royal Society B paper, the Altmetric score jumped to 479 (accurate as of 14:00 GMT on 25 January 2013). The paper was mentioned by a few mainstream news outlets and blogs, and attracted a great deal of attention on Twitter (35% from the USA, 28% from the UK), Facebook, and Google+. So what exactly were people saying about the paper?

Oddly enough, if you look at the tweets associated with the paper and compare them to the news coverage, you might initially wonder if everyone has been talking about the same paper. Browsing through the actual conversations and mentions as well some news coverage reveals discrepancies in what people emphasised as the take-home messages. For instance, Twitter users tended to tweet the title of the article, and many mentioned climate change and the environment:

The ultimate thriller: Can the collapse of global civilization be avoided? By Paul Erlich via @conservbytes rspb.royalsocietypublishing.org/content/280/17…

Something cheery about the possible impacts of #climate change to start your day rspb.royalsocietypublishing.org/cgi/content/lo…

Climate skeptics may appreciate this: if the climate doesn’t get us, over population& lack of food will: rspb.royalsocietypublishing.org/content/280/17…

Interestingly, most news headlines ignored the climate and environmental issues detailed in the paper, choosing instead to emphasise the argument that equal rights for women can prevent overpopulation and civilisation’s “collapse”. For instance, the following headlines appeared in 3 news outlets:

Regardless of whether women’s rights or climate change received more emphasis during the promotion of the paper, the end result was that the subject matter raised eyebrows, along with the Altmetric score.

The attention that the Ehrlichs’ paper received was particularly unique in that its visibility was boosted by a few widely-followed (and vocal) environmentalists. One of these people was 80-year-old Paul Ehrlich himself, who tweeted the following caps lock-heavy message to over 1,300 people:

American author Bill McKibben also played a role in boosting attention after he sent the following tweet to his 71,900+ followers:

New paper from a veteran voice: Ehrlich asks “can a collapse of global civilization be avoided?” and answers ‘maybe.’ rspb.royalsocietypublishing.org/content/280/17…

Additionally, the UK’s Prince Charles, whose views on environmental issues were actually referenced by the Ehrlichs in the second paragraph of their paper, also stepped into the conversation. The royal endorsed the paper in a statement on his website that:

“We do, in fact, have all the tools, assets and knowledge to avoid the collapse of which this report warns, but only if we act decisively now.”

Given the debates on climate change and the Ehlichs’ take on overpopulation, it wasn’t surprising that some people weren’t very impressed by the apocalyptic predictions, nor by the celebrity link:

When predicting the imminent collapse of global civilsation, it’s probably best not to start by quoting Prince Charles.rspb.royalsocietypublishing.org/content/280/17…

Different information streams are sometimes used to emphasise and promote specific ideas, even from a single paper. As such, the high Altmetric score tells us nothing about the quality of the paper or what kinds of reactions people had. However, it does indicate that a great deal of attention is being paid towards the paper. So in the case of the Ehrlichs’ perspective piece, tweeters and journalists might not have reached a consensus about what the authors’ main arguments were. But for all of us readers, one thing is for certain: the article has our attention.