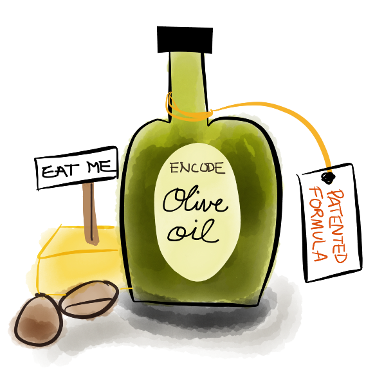 What kinds of research did people talk about in February? Here’s a hint: they didn’t talk much about love, but they did speak about food, the heart, intellectual property, and some angry scientists. In no particular order, here is another Interactions monthly wrap-up post featuring a selection of 5 new and popular articles in the Altmetric database.

1. “Myths, Presumptions, and Facts about Obesity”
Published on 31 January in the New England Journal of Medicine

Amidst the outpouring of love (and grumpiness) elicited by Valentine’s Day, medical articles relating to obesity and cardiovascular disease were major topics of online discussions this month. One popular article in our database was published in the NEJM, and its popularity can be attributed to the way in which it dispelled certain misconceptions about obesity that have been propagated by various parties, including the mainstream science media and even dieticians. This “mythbusting” NEJM article was highly tweeted and blogged about, and also received a huge amount of attention in the news (see Altmetric details). Unsurprisingly, one of the myths described in the article – that sexual activity burns 100-300 kcal for each person involved – received a disproportionately large focus in the news reports (e.g., Forbes’ ran the headline “Sorry, You Can’t Sex Yourself Thin [But You Can Kill Your Sex Life with Fat]”).

2. “Primary Prevention of Cardiovascular Disease with a Mediterranean Diet”
Published on 25 February in the New England Journal of Medicine

3. “Use of dietary linoleic acid for secondary prevention of coronary heart disease and death: evaluation of recovered data from the Sydney Diet Heart Study and updated meta-analysis”
Published on 5 February in BMJ

February was apparently a good month for re-examining the constituents of a healthy diet – in fact, two articles that were highly popular on Twitter happened to be related to cardiovascular risk and specific dietary components. The first article appeared in NEJM  and soared to the top of February’s attention rankings only a day after it was published (see Altmetric details). This article described a large-scale Spanish clinical trial that looked at whether adhering to the “Mediterranean diet” could reduce the risk of cardiovascular disease in at-risk people. Indeed, the authors found that participants on the Mediterranean diet (with supplements of extra-virgin olive oil or nuts) had reduced relative risk of cardiovascular disease by 30%. With so much social media buzz, the findings seem to now be poised to influence dinner tables around the world.

Another popular article in BMJ (see Altmetric details) described new analyses of previously unpublished data from the Sydney Diet Heart Study (a randomised controlled trial conducted between 1966-1973). Surprisingly, the authors of the new study found that increased intake levels of omega 6 linoleic acid (a polyunsaturated fatty acid) was associated with increased mortality from cardiovascular disease and coronary heart disease. This finding may have greater implications on existing dietary guidelines, which have long recommended that animal fats rich in saturated fats be substituted with vegetable oils rich in polyunsaturated fatty acids, the most common of which is omega 6 linoleic acid. With this revelation, a few people were inspired to tweet about the virtues of butter and yet another forthcoming dietary adjustment…

4. “The Case Against Patents”
Published in the Winter 2013 issue of the Journal of Economic Perspectives

After being shared by a few well known tweeters (namely the news site @slashdot and @timoreilly of O’Reilly Media), a new opinion piece on the problems of patent systems claimed a spot amongst the popular articles published in February. Written by 2 economists, the paper laid out arguments against the patent system while calling for the abolition of patents altogether. Although one blogger slammed the paper, its ideas seemed to resonate with hundreds of Twitter users, 84% of whom were members of the general public (see Altmetric details). Popular opinion might have been particularly swayed by the notable figures who helped to boost the visibility of this article, as illustrated by the fact that Tim O’Reilly’s tweet alone garnered over 200 re-tweets:

5. “On the immortality of television sets: “function” in the human genome according to the evolution-free gospel of ENCODE”
Published on 20 February in Genome Biology and Evolution

Scientific language is usually very civil, but the final article on this month’s high five list attracted a huge amount of diverse attention for its scathing words. In a long critique (spanning 35 pages), Dan Graur and his colleagues attacked the claim made by the ENCyclopedia Of DNA Elements (ENCODE) Consortium that 80% of the human genome contains functional DNA. Reactions to the Graur et al. paper erupted from social media, news reports, and blog posts (see Altmetric details), with the paper being described as “a devastating takedown”, “a public reaming”, “a bad example to young scientists”, and even a “spanking”. Although the paper did get the desired point across, when Popular Science interviewed Graur, he remarked, “I’m a little surprised that a paper this angry got through without changes–it was a little over the top in terms of its outright inflammatory statements”, a comment which echoed the sentiments expressed by some tweeters:

The angriest abstract I have ever read gbe.oxfordjournals.org/content/early/…

Honourable mentions from February, as featured in previous Interactions posts: