An interference effect of equations? 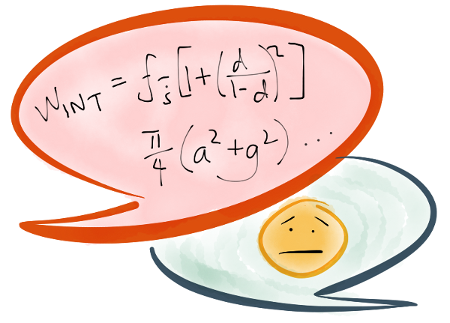 Theoretical biologists are skilled at creating mathematical models that can predict, assess, and/or explain natural phenomena. However, according to a recent study entitled “Heavy use of equations impedes communication among biologists” and published in the Proceedings of the National Academy of Sciences, the presence of mathematical intricacies in ecology and evolution papers tends to reduce the number of subsequent citations in non-theoretical (empirically based) papers. The authors of the study, Tim Fawcett and Andrew Higginson from the University of Bristol, found that as mathematical equation density increased in the main text, the number of citations in empirically based papers dropped considerably. Interestingly, inclusion of equations in the appendices of papers did not affect citation numbers.

The conclusions of the Fawcett and Higginson paper were essentially two-fold: in order to increase the impact (via citations) of theoretical papers in biology, the long-term solution would be to increase mathematical literacy in empirical biologists; however, the more realistic short-term solution would be to improve communication through the use of verbal explanations of maths in articles, leaving detailed equations in the appendices.

The online community speaks up

Following the paper’s online publication, the high-profile science writer Carl Zimmer tweeted the following to his legion of followers (120,000+ as of 14 November):

This caught the attention of many, but unsurprisingly, scientists were the ones who tended to propagate the message further.

Study suggests ecology/evolution papers with equations get cited less. Life is tough for a mathematical ecologist.goo.gl/bmYwY

The Fawcett and Higginson paper prompted a great amount of lively discussion in scientist-run blogs and blog comments, and even garnered 3 posts by experts on the F1000 Prime post-publication peer review website. Social media users were the messengers that spread the word about the paper, whereas more thoughtful analyses of the issues were primarily carried out by bloggers and their readership.

Blogger Steven Hamblin (a post-doc at the University of New South Wales) poked fun at the sensationalised news coverage surrounding the Fawcett and Higginson paper, but he and other bloggers (see write-ups on the blogs “The EEB and flow” and “Theoretical Ecology”) generally agreed with the sentiments of the paper. In contrast, blogger Jeremy Fox (Associate Professor of Population Ecology at the University of Calgary) injected a healthy dose of dissent through a blog post called “On equations, citations, and mathematical understanding”, in which he declared that understanding, not communication, was the major problem:

Many Ph.D. ecologists’ and evolutionary biologists’ last math class was a now-forgotten first-year undergraduate calculus course. Why should theoreticians be under a special obligation to write their papers at that level?

Florian Hartig, a researcher at the University of Freiburg, extended these criticisms in a detailed blog post by pointing out some confounding variables that were left out of Fawcett and Higginson’s analysis, and asking:

Would a paper that examines the Lyapunov exponent of a (sic) oscillatory predator prey system in 27 spatial dimensions published in Theoretical Population Biology really massively increase in citations if they dropped the maths?

Demonstrating that researchers do engage with online readers, the first author of the article, Tim Fawcett, took the time to respond to Hartig’s points in the blog comments, stating that:

Our focus in the article was on potential ways to facilitate communication between theory and experiments, and to that end we would hope to stimulate three debates:

By exchanging various opinions, thoughts, and ideas, the online community enhanced the impact of the Fawcett and Higginson paper, drawing a huge amount of attention to the issues that will need to be discusssed further in laboratories, publishing houses, and classrooms.

Understanding the audience of a paper

It’s interesting to note that the data in the Fawcett and Higginson paper were drawn from the 649 articles that were published in 3 top ecology and evolution journals (Proceedings of the Royal Society B: Biological Sciences, Evolution, and The American Naturalist) in 1998. (According to the authors, the year 1998 was chosen partially because of the availability of long-term impact data.) Since new measures of research impact can complement traditional metrics, it could be useful to find out if the observed trends in citations are also true for alt-metrics.

A quick look at Altmetric data for the 3 journals examined by Fawcett and Higginson indicates that Proceedings of the Royal Society B: Biological Sciences has over 1,200 articles with online mentions, and that papers from this journal sit at the top of the attention rankings in the Altmetric Explorer. Of the top 6 articles from these 3 journals, only the one in 6th place (highlighted in blue in the image below) shows equations within the main text. It’s hard to draw solid conclusions from this observation alone, but judging from the quirky titles of these 6 papers, the subject matter, not necessarily the maths content, appears to be a particularly important determinant of the attention that a given paper receives. 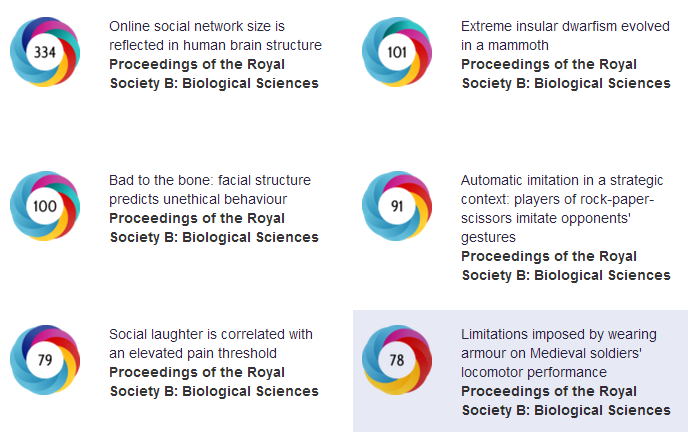 Differences in audience make-up and size (i.e., who is engaging with the content? how many people are participating?), medium (e.g., weighing the importance of opinions on Twitter versus blogs versus F1000 Prime), and accessibility (articles that are open-access or behind a paywall) are some factors that could influence alt-metrics. Accordingly, the findings of the Fawcett and Higginson paper, bring a few questions to mind. Would online discussions generally tend to avoid theoretical biology because of the inclusion of equations? If so, is such avoidance due to limited understanding of maths or just to a lack of specialist interest?

From Fawcett and Higginson’s paper, it seems that empiricists have difficulty communicating efficiently with theoreticians. Putting equations in the appendices and describing maths in the main text was one solution proposed by the authors, but implementing this approach depends in part on which audience determines the desired research impact. Different measures of impact (citation counts, alt-metrics, or a combination of these) arise from different audiences. Citation counts come from academic discourse amongst scholars, whereas alt-metrics are usually determined by conversations taking place amongst a broader, non-specialist audience. If a highly-technical paper is geared towards experts in the field, then perhaps its maths content shouldn’t necessarily be relegated to the appendices. However, if a paper involving theoretical models is intended to reach a broader audience, then maybe steps could be taken to clarify maths content to non-experts, without sacrificing any details that would be useful for experts. Ultimately, understanding the audience when preparing a scholarly manuscript can go a long way towards influencing its research impact later.

2 Responses to “Interactions: Foggy with a Risk of Mathematics”

Interactions: Here in the Blogosphere… | Altmetric.com

[…] altmetrics world. Since joining Altmetric as the data curator and blog editor, I’ve written a lot about the impact of blogs. In contrast, the data curation side of my job involves manually […]