Pinterest is a social bookmarking platform that is used for sharing (“pinning”) images, media, and webpages that feature virtually any topic, from vegan cooking to modern art. With over 48.7 million users as of February 2013 (according to comScore), Pinterest has become a massive social media platform that can deliver instant, community-curated inspiration. (I’ve joined the fun as well, and have been pinning my Interactions cartoons from this blog.)

Pinterest’s science and nature category appears to be quite active, but the images and links found here are generally unrelated to peer-reviewed research. However, people do pin figures and links to journal articles on other science-related pinboards, and Altmetric tracks this activity.

Pinning the numbers (and figures) down

Even though Pinterest has a huge user base, the number of times that any single journal article gets pinned on Pinterest is either low or non-existent. Pinterest may not be a bustling hub for scientific sharing, but it still contributes to the attention surrounding articles.

To get a sense of how Pinterest is used in the context of article sharing, I looked at the top 40 papers that had been pinned at least 5 times. The table lists the top 5 pinned articles (out of 40), along with 2 other metrics (tweeters and Facebook users). The far left column shows the Altmetric score ranking of each article amongst the sample of 40. The complete dataset is available on figshare. 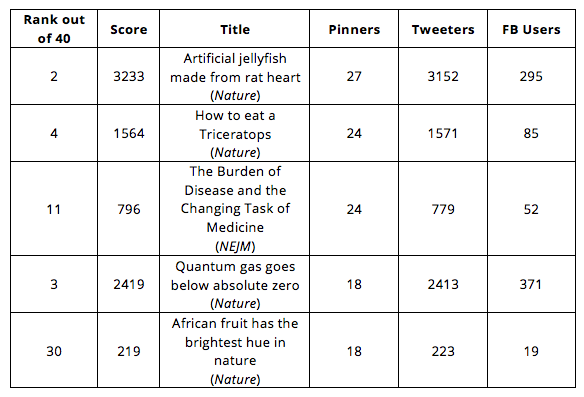 From this table, we can see that the maximum number of pinners for a single article has been 27 to date, and corresponds to an article that was tweeted by 3152 users and currently sits at #2 (of the 40) in terms of overall Altmetric score. In contrast, the 5th most pinned article sits at #30 (of of the 40). This all seems to suggest that Pinterest attention could be independent of increased attention in other metrics (Twitter, Facebook, etc.).

Interestingly, 4 out of the 5 most pinned articles were published in Nature, and 3 of these were News & Comment features. Since images for news features are often chosen for their visual appeal, I wondered whether these top images were pinned because they happened to more visually engaging, and more suited for the style that is characteristic of Pinterest. 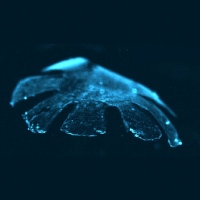 What was special about the top 5 most pinned images? For starters, the titles of pinboards (e.g., “Beauty”, “To Read”, “Cool Stuff”, etc.) are suggestive of why particular items were pinned. From these, we can hazard a guess at some possible reasons for pinning:

If you were to look at the pinned pictures associated with the top 5 most pinned articles (above table), you’d see that most are actually images and not data. This is at least partially due to the limitations of Pinterest for communicating science through certain kinds of pictures. Pinterest is a highly visual platform that is most suitable for displaying interesting, standalone, high-resolution images, but many research outputs are difficult to share in this manner. For instance, because figures and tables from papers tend to be precisely formatted for a manuscript, automatic image processing that occurs after pinning might end up detracting from the information presented. Moreover, figures or tables may not be available in high-resolution, or may not even be available at all (in the case of paywalled articles).

For some illustrative examples of both effective and ineffective science communication on Pinterest, take a look at these pinboards, which contain a miscellany of pins pointing to nature.com, bmj.com, and nejm.com. You’ll notice that some of these pins are clear and appealing, but others just consist of stretched versions of the journals’ logos. Without the pin’s caption, one would have no real inkling of what the pin is actually about. Consequently, those finicky image processing problems and inconsistencies take away from the visual appeal of a pinboard, making Pinterest a sub-optimal way to share and discuss research articles in many cases.

Given all of the issues mentioned above, it isn’t really surprising that article mentions on Pinterest are so low. But let’s not give up on Pinterest just yet. From a science communication standpoint, Pinterest’s beautiful visual format has the potential to provide a unique and dynamic view of research content that wouldn’t be completely possible through any other social media platform.

Right now, when it comes to sharing science news and articles, Twitter and Facebook are both popular amongst members of the general public, but the “success” of tweets and posts depends very much on language. This means that the choice of words for a tweet or a post influences users’ subsequent engagement with the linked content.

Pinterest, however, relies on an image to grab a user’s attention, and the wording of a caption is only a secondary concern. Since the number of Pinterest users is growing very rapidly, improving research engagement on Pinterest could be extremely valuable for attracting new science enthusiasts and readers. There is no shortage of stunning, artistic, pin-worthy images that come out of scientific research already; for instance, see the Nikon Small World Photomicrography Competition and of course, cover art for scientific journals such as Nature and Science. Even if works of art associated with one’s research aren’t readily available, data can still be presented in an accurate way that looks good on a pinboard. Focusing on an interesting portion of a graph, presenting photographs of the researchers involved, or depicting the research materials, subjects, and environment – these are just some of the ways in which communication of research through Pinterest might be improved.

Of course, images aren’t everything. Promoting research through multiple social media and mainstream media communication channels is still important if you want to generate diverse attention from a broad audience. From an alt-metrics standpoint, having diverse attention means that you can potentially see different impacts reflected in different metrics. (If you use the Altmetric score to gauge attention, an added bonus is that an article with varied attention becomes associated with a prettier Altmetric donut with more colours!) Pinner metrics are relatively low and uninformative for the time being, but who knows… maybe Pinterest could still develop into a richer medium for science communication.

Great post, it's nice to see there is some actual data on this!

As a social site, Pinterest it is still in its infancy - so it will be interesting to see what the future holds.

NPG have a great Pinterest account (not just being biased here). We have a lot of followers, but what we want to make sure is that users are actually clicking through to the papers, not just re-pinning images because they are pretty! http://pinterest.com/naturepubgrp/

[…] in Pinterest, so it seems few items would be counted in this measure. The Altmetric blog post “Interactions: Hmm… Pinteresting!” (by Jean Liu, 6 March 2013) provides some answers to my questions and is well worth a […]