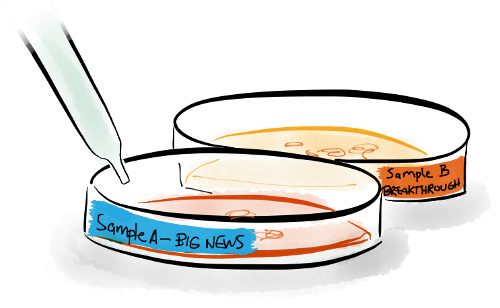 What kinds of research did people talk about in May?  While the field of stem cell biology saw a blockbuster paper appear this month, what really took centre stage was the scholarly publication, including its life cycle from peer review to post-publication assessment. Here is another Interactions monthly wrap-up featuring a selection of 5 new and popular articles in the Altmetric database. Data are accurate as of 29 May 2013.

1. “Peer-review practices of psychological journals: The fate of published articles, submitted again”
Published in June 1982 in Behavioral and Brain Sciences

This study, originally published in 1982, detailed an interesting experiment that was designed to probe at the peer review process. As part of the study, 12 already-published psychology articles were altered slightly and then re-submitted to their original publishers after over a year. Shockingly, most of the re-submissions failed to be detected as such, and most even ended up receiving evaluations. Moreover, 8 of the 9 articles allowed through the review process ended up getting rejected.

Even though it was published about 31 years ago, this paper still drew a huge amount attention this month after being widely shared on Twitter, Facebook, and blogs (see Altmetric details). Among the various sources of attention, Twitter was the most influential. Take this tweet by a professor at McGill University (Montreal, Canada), which was re-tweeted 83 times:

Every journal editor must read: most articles once published, then resubmitted, were REJECTED later, 2nd time around journals.cambridge.org/action/display…

This paper, authored by researchers from the Oregon Health and Science University, was published only 2 weeks ago in Cell but has already been mentioned in a whopping 49 different news outlets (see Altmetric details). The paper reported the successful reprogramming of human skin cells back to embryonic stem cells, and has been hailed as a “major medical breakthrough”. However, in a dramatic twist, an anonymous reviewer on the site PubPeer drew attention to several issues with some of the paper’s figures. The paper’s lead author has now acknowledged that some sloppy errors slipped through, but that “the results are real” and an erratum will soon be released.

3. “Quantifying the consensus on anthropogenic global warming in the scientific literature”
Published on 15 May in Environmental Research Letters

Th existence of climate change is perceived to be a controversial issue, but this new citizen science survey of 11,944 climate-related research abstracts (from 1991–2011) found a large degree of consensus within a set of scientific articles on anthropogenic global warming (AGW). As part of “The Consensus Project”, the data presented in this paper were gathered by volunteers who first became involved with the project through SkepticalScience.com. The study found that “[a]mong papers expressing a position on AGW [anthropogenic global warming], an overwhelming percentage (97.2% based on self-ratings, 97.1% based on abstract ratings) endorses the scientiﬁc consensus on AGW.”

The overwhelming #consensus among scientists is rapid #climatechange is happening & man is the cause #TCP sks.to/tcppaper

Additionally, the paper was a popular topic in the news (with coverage from Ars Technica, Red Orbit, Mother Jones) and extensively discussed in the blogosphere (see posts and comments on Greg Laden’s blog, NeuroLOGICA blog for examples).

4. “Impact Factor Distortions”
Published on 17 May in Science

Extremely popular amongst academics this month was this editorial by Bruce Alberts, the Editor-in-Chief of Science. Alberts discussed the problems of using the Journal Impact Factor for the evaluation of individual scientists, and endorsed the new San Francisco Declaration on Research Assessment (DORA). In addition to being popular on social media (see Altmetric details), the editorial was mentioned in 3 news reports (The Scientist, Science Insider, and the Nature News Blog) and several blog posts by academics (see The EEB & Flow and Data Pub).

5. “The role of twitter in the life cycle of a scientific publication”
Submitted to arXiv on 2 May

The themes of peer review and post-publication assessments have been particularly strong in May, so it seems fitting that this new arXiv paper about Twitter and the scientific workflow should also appear on this month’s list. This interesting paper provided many insights on how scientists can get started with Twitter, what kinds of networks exist (e.g. virtual departments), how tweeting benefits research collaborations, and other topics. The authors of the paper, who wrote from their experiences in marine science, described many interesting cases and examples to illustrate their points.

Online attention paid to the paper appeared almost exclusively on social media (however, one blogger extended the advice for scientists detailed in the paper to journal staff), as one might have expected. The paper was predominantly shared on Twitter by scientists and academics, including many people involved in the altmetrics movement (see Altmetric details).

Now this is a paper to retweet: The role of #twitter in the life cycle of a scientific publication is.gd/diS7YN MT @grrlscientist