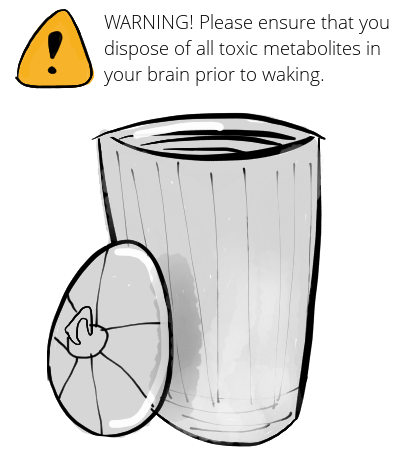 Newsworthy papers dominated the High Five list for October. As usual, there was an emphasis on health-related matters, although a significant archaeological find and an interesting psychological study both captured public attention as well. Curiously, only 2 journals, Science and BMJ, captured all 5 top spots on this list. Here’s another monthly wrap-up of 5 new and popular articles picked from the Altmetric database. Data are accurate as of 4 November 2013.

1. Sleep Drives Metabolite Clearance from the Adult Brain
Published on 18 October in Science

This paper quickly went viral after being mentioned repeatedly on social media, as well as being reported in dozens of international news outlets and blogs (see Altmetric details). In terms of its scientific merit, this paper has been an important step forward in sleep research, as the authors were able to show that a possible function of sleep (at least in mice) may be to clear toxic metabolites and proteins from the brain. Intriguingly, the researchers had found evidence that the toxic metabolites were being cleared via a recently-discovered circulatory system in the mouse brain known as the “glymphatic system”.

On Twitter, the paper was mostly mentioned by members of the public. However, scientists made a point to publicise the story as well – see this post on Deric Bownds’s Mindblog and this post on the NIH Research Matters blog. While social media posts often pointed to the paper by mentioning the brain’s “garbage truck”, news headlines frequently made reference to the clearing out of toxins, as well as the possible implications for diseases such as Alzheimer’s (see the National Geographic and Forbes stories).

Last month, BMJ published 2 highly-successful papers, including this analysis of a large set of clinical literature. The authors of this paper set out to find out and compare how effective physical exercise or drug interventions were at preventing death, and found a relationship between exercise and decreased mortality. They concluded that exercise is potentially as effective as drug interventions in preventing or treating certain types of cardiovascular and metabolic diseases.

The paper received a huge amount of attention amongst members of the general public, after being covered by many science- and health-related news sites (see Altmetric details). On Twitter, links to the paper were predominantly tweeted by members of the general public (743 tweeters), although the paper was also shared by a large number of health practitioners (222 tweeters). Science bloggers did a great job evaluating the paper, and excellent posts can be found at The Lifestyle Elf and Evidently Cochrane.

3. Saturated fat is not the major issue
Published on 22 October in BMJ

Another highly-popular article in BMJ last month focused on saturated fats. This perspective piece by a UK cardiologist Dr. Aseem Malhotra caused a media sensation because of its strong message that the risks of developing diseases from the consumption of saturated fats is exaggerated.

Some of the news coverage was certainly more balanced than others (see Altmetric details). The fairness of the media coverage was briefly discussed in this NHS Choices article, which also did a good job presenting Dr. Malhotra’s arguments in context.

Asides from the the media buzz, the paper seemed relatively well-received in online academic circles. The paper received a recommendation in F1000 Prime, and was also the subject of 2 well-written blog posts on The Health Care Blog and In the Pipeline.

On Twitter, most people who shared links to the paper were members of the general public (781 tweeters) or practicioners (275 tweeters). Numerous people re-tweeted Dr. Malhotra’s own announcement about his paper:

Time to bust the myth of saturated fat & heart disease & reduce the harms of too much medicine. My #BMJ piece http://t.co/STy71qusos #NHS

4. A Complete Skull from Dmanisi, Georgia, and the Evolutionary Biology of Early Homo
Published on 18 October in Science

This new Science paper described the significant discovery of a 1.8 million-year-old adult hominid skull in Dmanisi, Georgia. The discovery was important for several reasons. Firstly, the skull was remarkably well-preserved. Secondly, there was now evidence to suggest that human evolved from one lineage of hominids. The paper became sensationally popular in the news, and was covered in many different languages. As far as we’ve seen, the paper was reported by a whopping 128 outlets from around the world (see Altmetric details).

Several bloggers with interests in palaeontology, archaeology, anthropology, and evolutionary biology stepped in to discuss this important discovery. Excellent posts on the topic can be found at paleoneurology, Archaeology and Material culture, The Mermaid’s Tale, and Understanding Evolution.

Overall, the media coverage for this paper generally seems quite balanced, and there was a mixture of reporting from science news and mainstream news outlets (see Altmetric details). (However, I have to say that the headline of this piece from Men’s Health Magazine, “Decode What She’s Thinking”, is pretty ridiculous…) In the humanities blogosphere, the response to the paper was quite favourable, with the exception of this post on Language Log. The research was highlighted in the Open Culture blog, as well as in this humourously-titled post, “Can we take back that apology to the readers of romance novels?” on The Jury Room.

This month two BMJ articles featured in Altmetric's list of the five most influential stories... http://t.co/KpR8CG19sM

Top five @altmetric papers last month, all picked up in health news. Great to see impact other than citations http://t.co/G6DbShM3SJ

Interessant MT @altmetric: October High Five list is now up! Find out which were the most popular papers last month: http://t.co/IWQ0vkjMHe

The "sleep detox" paper may be the most popular paper as judged by altmetrics, but if you actually read it, I doubt that most people would rate it so highly. The conclusions are highly speculative, and the evidence for involvement of the adrenergic system is dubious in the extreme. infusion of 2 mM prazosin directly into the brain is asking for non-specific effects. The Kd is less than 1 nM, so the concentration is about a million times too high.

The paper is behind the Science paywall, so one has to ask how many of the 1340 tweeters had actually read it. This is one of the best examples I've seen of why altmetrics is a very bad way to judge papers.

Why you should ignore altmetrics and other bibliometric nightmares

[…] But this paper was hidden behind Science’s paywall.  It’s bordering on irresponsible for journals to promote on social media papers that can’t be read freely.  It’s unlikely that anyone outside academia had read it, and therefore few of the tweeters had any idea of the actual content, or the way the research was done.  Nevertheless it got “1,479 tweets from 1,355 accounts with an upper bound of 1,110,974 combined followers”.  It had the huge Altmetrics score of 1848, the highest altmetric score in October 2013. […]