The Internet: harmful or just a memory aid? 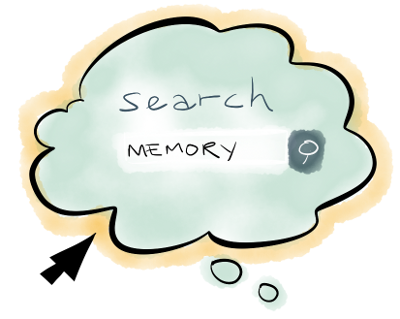 The Internet runs parallel to our physical world: it can be a library, a playground, a television, a telephone, and a postal service all at once. Although it has familiar functions, the Internet now delivers content in a way that we have never quite experienced it before: instantly and on-demand. Every Internet user has learned strategies to pluck relevant items out of the deluge of information. This digitally-adapted lifestyle inevitably affects all users in some way, but the extent to which the brain has been “altered” by the experience of technology remains a contentious issue in research and amongst the general public.

That the Internet has negative effects on the functioning of the brain (specifically with respect to cognition and memory) has frequently been a preferred angle taken by traditional news sources, and consequently, this view is susceptible to rapid propagation across social networks. The most famous essay to expound on the subject of the Internet’s harms was one by Nicholas Carr called “Is Google Making Us Stupid?” (published in 2008 in The Atlantic). Carr, a journalist who later wrote a book called The Shallows: What the Internet Is Doing to Our Brains, gained wide recognition for his views on the harmful consequences of technology use. Although controversial, these ideas from Carr’s prominent essay and book helped to stimulate much online discussion.

A few years later, more sensational headlines such as “Poor memory? Blame Google” (The Guardian, 15 July 2011) and “Internet search engines cause poor memory, scientists claim” (The Telegraph, 15 July 2011) appeared above news reports about a 2011 Science article by Betsy Sparrow and her colleagues. The article, entitled “Google Effects on Memory: Cognitive Consequences of Having Information at Our Fingertips”, described a series of 4 experiments that had been designed to quantify the psychological effects of Internet search engine reliance. Contrary to the impression given by some news headlines, the research findings didn’t show that search engine use had made the participants stupid or destroyed their memory capacities. Instead, the results implied that the processes of memory were altered, such that participants were storing their memories externally, in a form of “transactive memory” that was similar to being reliant on a friend for specific pieces of information. The implication was that constant exposure to search engines had created a kind of memory adaptation to use the Internet as a “social brain”, which would be readily able to retrieve information at the appropriate time.

Since the Sparrow et al. article pertained directly to the minds of Internet users, it was no surprise that the Twitterverse was abuzz about the findings.

Wow: Another great from Science: Google has become the primary form of external transactive memory for our brains is.gd/5MNW1I

Although most tweets simply shared the title of the article or a few choice quotes, an overly negative interpretation of the findings was propagated by one highly visible figure. Joshua Foer, a writer and 2006 winner of the World Memory Championships, had recently authored a popular book called Moonwalking with Einstein: The Art and Science of Remembering Everything. Foer sent out the following tweet to a few thousand followers (4000+ as of November 2012):

Wish I could have cited this in my book. This week’s issue of Science confirms: Google is indeed bad for your memory. sciencemag.org/content/early/…

This slightly inaccurate, shallow interpretation of the Sparrow et al. article was subsequently re-tweeted by many, including another prominent writer, the now-disgraced Jonah Lehrer (40,000+ followers as of November 2012).

Attempts to stick rigorously to the truth were not re-tweeted nearly as often:

No -it suggests memory content is different, not worse RT @joshuafoer: Science confirms: Google is bad for your memory. sciencemag.org/content/early/…

As the notion that Google was detrimental to memory was spread widely through Twitter, a different view appeared within the blogosphere.

The blogosphere as a journal club

The Sparrow et al. paper received a large amount of high-quality blog attention, and the depth of the discussions resembled a digital incarnation of the “journal club”, an age-old university tradition in which scholars come together to discuss a particular research article. In one post on The Neurocritic, a detailed outline of the experimental methods was presented, in addition to a discussion of potential experimental confounds. Another post on Neurobonkers also decried the confounding factors in the article, following up on previous complaints of how the dangers of Internet use are often blown out of proportion. A balanced and informative post by Ed Yong also appeared in his excellent blog Not Exactly Rocket Science, further distancing the Sparrow et al. article from exaggerated claims that the Internet is harmful. Additionally, various news media-linked blogs presented more pragmatic reports of the findings of Sparrow et al. (Wall Street Journal Health Blog; Wired Science; British Psychological Society Research Digest). All in all, the subtle misrepresentation of the Sparrow et al. paper by certain news and Twitter headines was soundly countered by high-quality bloggers.

While blogs are not always the most reliable of news sources, they constitute an excellent, free medium for discussing academic research (i.e., as in journal clubs) and for communicating science with the public. Furthermore, the analyses in blog posts illustrate the extent to which a scholarly article provokes thought and discussion within both academic and non-academic audiences. The number of times that an article is tweeted and shared gives a quick impression of social media impact, but microblogging is occasionally performed on impulse without careful perusal of the source material. In such cases, it is the quality of the blog discussions that truly capture the immediate online impact of the research.