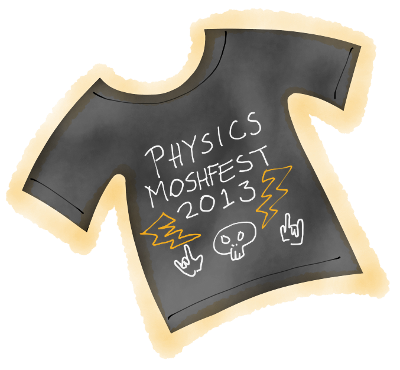 Field research… in the mosh pit

With the help of soul-crushing power chords, a driving bass line, frenetic drumming, and perhaps a few otherworldly screams, certain groups of humans might find themselves behaving like random gas particles. After observing moshing from distance at a metal concert, metalhead and Cornell University graduate student Jesse Silverberg began to study the physics of extreme group movements in mosh pits. Silverberg and colleagues collected data from YouTube videos of moshers and created a computer simulation, observing that the energetic movements of the concertgoers could be predicted using 2D mathematical models of gaseous particle motion. The findings were submitted to arXiv (“Collective Motion of Moshers at Heavy Metal Concerts” by Silverberg et al., 7 February 2012), and quickly became one of the most highly-mentioned articles in the Altmetric database (see article details).

Like most highly popular science papers, the Silverberg et al. article was shared through social media, news reports, and blog posts. However, the quality of Twitter attention that this paper received was notable, because a large number of tweets about the paper were unique. To explain why tweet uniqueness for papers matters, let’s take a look at trends in scholarly tweets in general.

If you stay up-to-date with the latest science literature through Twitter, you’re probably already familiar with the various flavours of scholarly tweets. Hitting the “tweet” button on journal article pages often just spits out the link to the paper, so any introductory information about the paper then has to come from the user. Although variations exist, there are 4 common styles of tweets (each of which also include a link to the paper):

Crafting a tweet in one of these styles can take a varying amount of time and effort. As a result, tweet styles can indicate levels of tweeter engagement with scholarly articles. Copying and pasting the title of the article is the simplest way to introduce a paper, but doing this doesn’t really indicate that the tweeter has read the article or even the abstract. In contrast, summarising the findings of the paper (or providing a personal comment) is more time-consuming, and the tweeter is more likely to have read and understood the abstract and/or paper. Most importantly, language matters: jargon-filled article titles or summaries might dissuade potential readers from reading and re-tweeting, whereas explanations written in plain English tend to be more inviting.

Now, if we get back to the physics of moshing, we can see how unique (i.e., not copy-pasted titles), simple, and creative tweets about the Silverberg et al. article could have contributed to its overwhelming popularity:

I foolishly studied quantum entanglement for my physics degree. I could have been working on moshpits instead:… fb.me/1YIiD51y6

You see a paper on the “gas-like” motion of humans in mosh pits, I see an excuse to spend grant money on show tickets. bit.ly/Xb0uPP

The Silverberg et al. paper even instilled pride within certain people, namely physicists and musicians (which, of course, aren’t mutually exclusive groupings). Notably, Alex Skolnick, a well-known American guitarist, found the paper fascinating enough to tweet about it to his 25,000+ followers.

Proud to be a physicist: ‘Collective Motion of Moshers at Heavy Metal Concerts’ RT @bagrow @arxivblog hit of day: arxiv.org/abs/1302.1886

Why were there so many unique tweets about the Silverberg et al. paper? Perhaps one explanation is that the readers were able to relate to the work, either as general science buffs, physicists, or music-lovers. Many people identified strongly with certain aspects of the study (physics and metal music), and so they chose to tweet in a personal context. Thus, from the qualitative data, it seems that readers who felt a greater personal connection with the article were more compelled to craft a unique tweet about it. Of course, many readers also just thought the paper was cool, and crafted a witty tweet to showcase the research. Regardless of the motivations, in taking the time to communicate the study to their followers, tweeters helped to boost the online visibility of the Silverberg et al. paper, thereby conveying the flexibility (and infinite coolness) of physics to an very diverse audience.

Interactions: The Numbers Behind #ICanHazPDF | Altmetric.com

[...] while ago, I wrote about the ways that people use Twitter to share scholarly articles but one thing we didn’t cover is the use of hashtags. Most tweets are sent to share a paper, [...]

Jean, how common are the 4 common styles of tweets? Do you have ratios, perhaps? The first is 20%, followed by 18, 13, and 9%? Do some style lead to more RTing? I can imagine that more personal styles get less RTs, because the are more personal? Do you find evidence for (or against) that?

Also, over they years, I have seen people use social tools rather differently. Some too personal, some very business-like. This has led to a lot of confusion about what blogging is, for example, and I see that echoed in discussions about the use of Twitter in science. Some (incorrectly) think of these tools as a single medium, where they really are purely the network. A blog can be about post-doc life, or only about science. Not distinguishing that lead to a load of FUD.

Now, I am wondering how this links to tweet styles. Are the tweet styles echos of the different ways of using these social channels?

For the record, blogging is for me like a presenting conference posters, or perhaps a conference talk, while tweeting (Twitter or Identica; you are tracking the latter too, I hope??) is like the coffee-break science discussions during conferences and in university corridors (and in The Eagle).