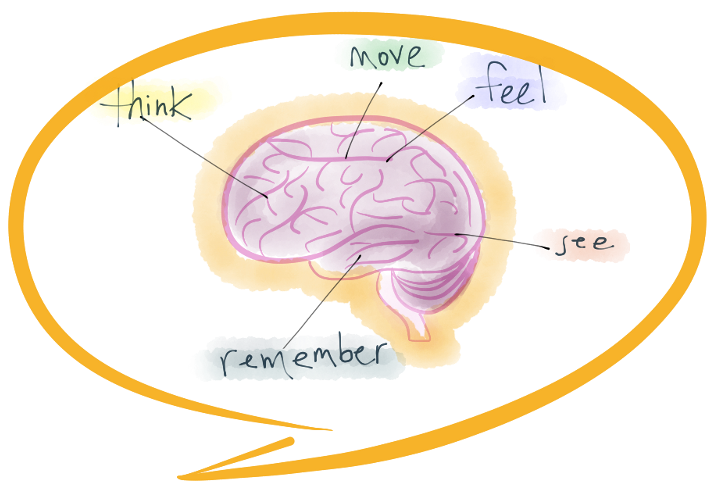 Communicating the intricacies of scientific findings to a mixed audience of non-experts and experts is by no means a simple task. How can one explain complicated phenomena to people with little or no background in research, while also satisfying the specialists? From the choice of source material to the choice of words, clarity and accuracy are crucial components of good science communication. Also important is the interest level of the audience – a major challenge involves getting people to pay attention to the subject matter. The question “why should I care about this research?” is blunt, but nevertheless needs to be addressed by the researchers themselves, along with science communicators. The task seems easier with some topics, which just seem to garner instant interest: specifically, stories about psychology and neuroscience, which often deal with the mysteries of the human brain, occupy a comfortable perch in the branches of popular science. However, a huge gulf exists between artificial, dressed-up explanations and ones with real substance.

A cursory glance at popular science offers glimpses of media spin and, in the case of psychology reporting, an influx of articles that report the “the neuroscience of behaviour X”. Some of these cheapen legitimate neuroscience research with the flashy overuse (and misuse) of neuroscience, coupled with the strongly persuasive nature of brain scan images. All of this has led to the coining of new terms with negative connotations that use “neuro” as a prefix. One that’s listed in the Urban Dictionary describes the awkward trend that seems to have infiltrated a lot of science reports: the “neurofication” of everything.

Spicing up psychological concepts… with neuroscience?

In 2008, Weisberg et al. (Yale University) found that embedding extraneous neuroscience phrases into explanations of cognitive psychology concepts could fool particular groups of people into thinking that the information was of higher quality than it actually was. Thus, if a poor explanation of a psychological concept was provided alongside an irrelevant reference to neuroscience (e.g., brain scanning), subjects deemed the poor but jazzed up explanation to be more satisfying. In other words, the addition of useless neuroscience words provided a sense of credibility to poor scientific explanations, thereby improving the perceived quality of the statements.

The paper, published in the Journal of Cognitive Science with the snappy title of “The Seductive Allure of Neuroscience Explanations”, reported that novices (with no neuroscience background) and undergraduate students (enrolled in a neuroscience course) were more vulnerable to being duped by fluffy, superfluous neuroscience when compared to experts. (It’s important to note that the apparent “seductive” effect of neuroscience could be attributed be to the inclusion of long, scientific-sounding explanations; what impresses people may be the use of scientific terminology in general, rather than the use of neuroscience words.)

Weisberg et al. concluded their paper with some frightening implications of their findings, pointing to the legal system as a particular area in which the misuse of neuroscience information could wreak havoc. Indeed, the misapplication of neuroscientific research to substantiate claims made in the courtroom has become a major concern, and has begun to receive significant news media coverage (see this piece from Reuters, and a recent one from the New York Times). The unsettling tone set by the findings of Weisberg et al. resonated through the final sentences of their paper:

“Because it is unlikely that the popularity of neuroscience findings in the public sphere will wane any time soon, we see in the current results more reasons for caution when applying neuroscientific findings to social issues. Even if expert practitioners can easily distinguish good neuroscience explanations from bad, they must not assume that those outside the discipline will be as discriminating.”

The Weisberg et al. paper was highly popular in social media, with links to the paper being widely tweeted and shared. Many directly quoted the paper’s findings, but one tweeter summarised the results with a sarcastic (but effective) tweet:

Hey pundits! Trying to sell your spurious theory about the problem with society/kids/etc these days? Use neuroscience! 1.usa.gov/jf19Hd

Discussing real-life examples of the uneasy collision between neuroscience research and society (particularly with respect to “neuro-evidence” in the legal system), bloggers like Ben Goldacre and Neuroskeptic (who also wrote a critique of the paper) threw their perspectives into the mix. These posts echoed a common idea: that inaccurate science communication has the power to seriously damage society. To mitigate the harms of “bad neuroscience”, other bloggers like Bradley Voytek and Neurobonkers referred to the Weisberg et al. article in their discussions of ways to spot problems in scientific literature and correctly interpret neuroscience research.

Does the seductive allure of neuroscience apply to article titles?

When considering alt-metrics, which are governed by the amount and quality of social media attention, we wondered about the prevalence of neuroscience words in the titles of the top cognitive psychology articles in the Altmetric database. We retrieved 46 journals with the word “cognitive” or “cognition” in the title, and of these, there were 39 journals with 1,836 articles that had been tracked by Altmetric.

Five out of the 9 top papers in the sample had neuroscience-related terms in the title (highlighted in blue in the figure below); the first paper listed was the Weisberg et al. one.

The 5 most frequently mentioned words were: cognitive (209 occurrences), neuroscience (151 occurrences), brain (139 occurrences), spatial (119 occurrences), and mind (114 occurrences). The graph below shows the frequency distribution for the top 100 words appearing in our sample of 1,836 cognitive psychology article titles. Bars for neuroscience words are indicated in red. Click on the graph to expand it and view all 100 words. (You can also browse through our dataset for this post on figshare.) 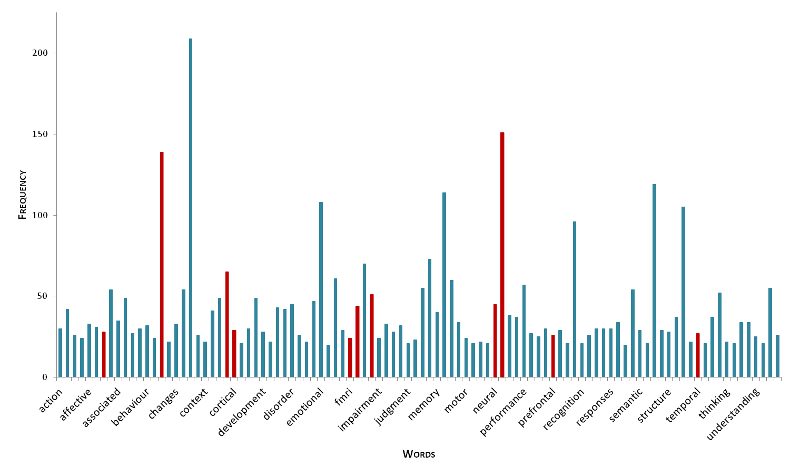 Histogram showing the frequencies of 100 words appearing in the titles of sampled cognitive psychology papers.

Judging from the high number of mentions of neuroscience words, is it possible that titles which refer to the biological bases of cognition and behaviour could potentially boost online attention for particular cognitive psychology papers? Without going further into the data, it’s impossible to tell if the use of particular neuroscience words is correlated with a paper’s popularity. Still, in many cases, it may be necessary (due to the use of particular experimental methods) for cognitive psychologists to report their work through the lens of neuroscience. Additionally, references to neuroscience may be motivated by the need to “advertise” and appeal to a broader audience. As the results of the Weisberg et al. paper indicated, neuroscience (or likely any complex science, for that matter) can be used incorrectly to sway the opinions of non-experts. As such, it’s important for all readers – both generalist and specialist – to use all the resources available, including blogs and primary literature, to try and discern the good science from the bad.

This post is available in PDF format on figshare, and can be cited as:

2 Responses to “Interactions: The Magic Word is 'Neuroscience'”

[...] media outlets probably wouldn’t hype up the news as much. Just as psychologists noticed a “seductive allure of neuroscience words”, there might be a similar “seductive allure” of giant pandas… at least for the [...]