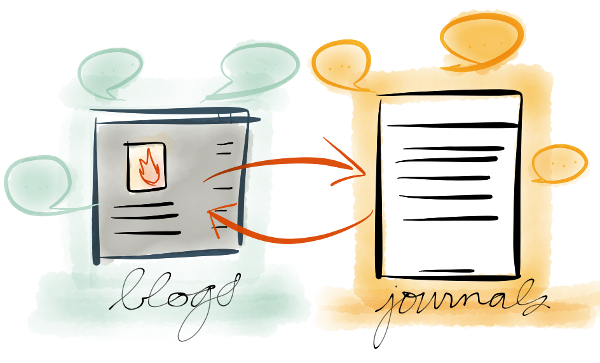 Science blogs are valuable tools that scientists often use to communicate research to the general public. Additionally, expert blogs that are geared towards scientists can enrich and clarify online discussions about scholarly articles. Bolstered by the reach of social media networks, blogs have the potential to exert great influence on generalists and specialists alike.

Despite the important roles that blogs play in science communication online, the blogosphere rarely intersects with academic journals. Particularly, when journals and blogs write about the same topics, journals rarely reference blogs, while obviously the reverse is the norm. However, earlier this month, something rather unique happened: a paper adapted from a 2010 blog post was published in an academic journal under a blogging pseudonym. The paper, entitled “The Nine Circles of Scientific Hell” and published in Perspectives on Psychological Science, was written by the well-known blogger Neuroskeptic, who tweeted about this achievement to nearly 10,000 followers:

Neuroskeptic makes history! By being first blogger to publish a paper in an academic journal under blog pseudonym pps.sagepub.com/content/7/6/64…

In a blog post about the paper, Neuroskeptic explained how opening up communication beyond the academic journal was important for researchers, remarking that:

“… the boundaries between ‘real’ papers and alternative forms of scientific communication have just become a little blurrier.”

Can the online community help to eradicate scientific misconduct?

The popularity of Neuroskeptic’s paper was certainly boosted by the fact that it had originally come from a blog. But, it wasn’t just that a blogger had published an article under a pseudonym that attracted buzz. Altmetric data indicate that a large amount of online attention also centred on the paper’s tongue-in-cheek content, namely, the punishments that should face scientists who don’t conduct their research with integrity. According to Neuroskeptic, by engaging in bad practices such as plagiarism, fabrication and/or biasing of data, etc., scientists were setting themselves up for hellish disaster. The paper took a darkly humorous stance on the issue of research misconduct, but it was still highly effective as a reflection of a major issue that has been plaguing the scientific community for quite some time.

The 9 circles of scientific hell: the fate that awaits scientists who sin against best practice ow.ly/f8bnT paper by @neuro_skeptic

It is somewhat revealing that Neuroskeptic’s paper was published in an edition of Perspectives on Psychological Science called “Special Section on Replicability in Psychological Science: A Crisis of Confidence?” Lately, the field of psychology has been receiving a lot of bad press due to cases of misconduct and the failure to replicate experiments, although it’s become apparent that various “scientific sins” are generally pervasive in the research world, and account for most journal article retractions. Many have argued that the “publish or perish” mentality has poisoned science (this was a particularly hot topic in the “Fixing the fraud: how do we safeguard science from misconduct?” session at SpotOn London 2012; see the Storify), and have called for massive changes in the way that research is conducted and communicated.

The good news is that the online community has been extremely active in supporting the move towards higher standards of scientific integrity and transparency in research. From the excellent “Retraction Watch” blog (by Ivan Oransky and Adam Marcus) to projects like the Reproducibility Intiative, figshare, and the Open Science Framework, there is a sense that misconduct is being reported and online tools can help prevent future wrongdoings.

As more and more researchers join into online conversations about research misconduct through blogs and social media, there’s hope that such wide exposure of research’s ugly underbelly will change the practices of the guilty. Posts in high profile blogs, such as Retraction Watch and Neuroskeptic, can make large contributions to discussions about research integrity. Neuroskeptic’s quirky blog post initially grabbed a lot of attention when it appeared, and then a second wave of attention (both in academia and online) was triggered by the publication of the paper, which in turn drove more traffic to the blog. In a March 2012 interview, Ivan Oransky from Retraction Watch explained why the blog is the ideal format for reporting scientific misconduct:

“… once you start blogging you are connected to this world of people who care about similar things and who get interested in your work. They really become your… ‘advertisers’. I don’t mean advertisers paying you money, I mean, they become your marketers, they get the word out about your work and that is what made it so powerful.”

By “advertising” that the truth in science is paramount and promoting new ways to improve research integrity, the online community has the power to go beyond simply reporting and discussing findings to making a real difference in the scientific endeavour itself. And who knows, maybe now that a precedent has been set, we might even start seeing more blog posts appearing in academic journals.

5 Responses to “Interactions: The Trailblazers and the Whistleblowers”

Thanks for the kind words!

Interactions: Turning On the Mic | Altmetric.com

[...] of scholarly papers has been a recurring theme in our “Interactions” series (e.g., a blog post became a journal article and blogs often serve as virtual journal clubs). However, one online medium that has been [...]

[...] use of social media). Qualitative altmetrics data can provide insightful snapshots of highly-articulate communities of academic bloggers, vast networks of academics on social media, and examples of engaging science [...]

Interactions: Here in the Blogosphere… | Altmetric.com

[…] into the altmetrics world. Since joining Altmetric as the data curator and blog editor, I’ve written a lot about the impact of blogs. In contrast, the data curation side of my job involves manually […]

[…] Interactions: The Trailblazers and the Whistleblowers (altmetric.com) […]