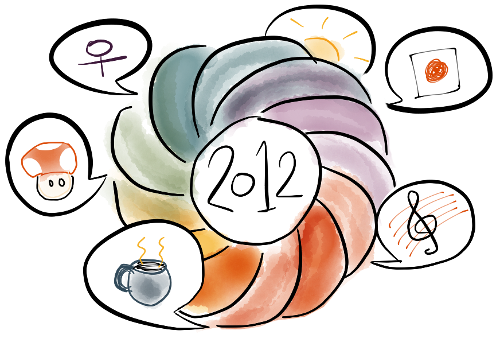 How do people interact with science? And how does the influence of science change as a result of these interactions? Since the “Interactions” series of blog posts began back in September, we’ve tried to interpret the overarching themes that come from the plethora of online scholarly conversations. From these conversations, we’ve been able to tell stories that extend beyond the original research work.

For the last “Interactions” post of 2012, we thought we’d showcase 10 of the top articles in the Altmetric database that received the most online attention in the past year. Note that this is the same list that was published on the Nature news blog earlier today (Richard Van Noorden’s post “What were the top papers of 2012 on social media?”) – however, these rankings reflect all of the online attention for the articles (with mentions dating before 1 January 2012), and are up-to-date as of noon today.

1. “Food for thought. What you eat depends on your sex and eating companions”

Like the web, the dinner table is an incredibly social place. This 2009 article, which appeared in Appetite, found that the caloric intake of women was influenced by the gender of their dining partner. This paper was the subject of a comprehensive blog post on Nutrition Wonderland, as well as over 2,000 tweets. Interestingly, the majority of tweeters (60%) originated from Indonesia. Without visualising the Twitter networks involved, we can’t do much more than speculate that much of the attention originated from 2 tweets sent in February and June 2012 by the account @AndaTahu (which translates from Indonesian to English as “Did You Know?”). These tweets reached a whopping 330,000+ followers.

2. “The biological impacts of the Fukushima nuclear accident on the pale grass blue butterfly”

The results of this 2012 article (published in Scientific Reports) illustrated a sad biological consequence of the 2011 collapse of the Fukushima Dai-ichi Nuclear Power Plant in Japan. Altmetric data for this article showed that the majority of tweeters (67%) originated from Japan. Back in October, we discussed the online attention surrounding this article, saying that its content “speaks to Japanese readers about more than butterflies, hinting that similar disturbances may resonate through Fukushima and neighbouring areas for decades to come, affecting both animals and humans.”

3. “Association of coffee drinking with total and cause-specific mortality”

Coffee is a much-loved beverage and a huge topic of interest, so it’s not surprising that it came up as a top keyword in our recent “alt-metric food analysis” of cancer-related papers in the Altmetric database. Earlier this year, coffee addicts around the world rejoiced online after the publication of an article in New England Journal of Medicine, which reported that high daily consumption of coffee (6 or more cups) was associated with reduced risk of mortality in a large cohort of American adults (n=402,260). With 16,000+ tweets and 11 blog posts discussing the paper, there was plenty of online attention, and responses ranged from celebratory to sceptical. The New England Journal of Medicine tweeted about their paper, and were cautious not to misconstrue the results:

Nevertheless, there were some tweeters who just happily took the results of study as a reason to indulge.

4. “Rape-related pregnancy: estimates and descriptive characteristics from a national sample of women”

Earlier this year, a Republican nominee for the U.S. Senate, Todd Akin, was interviewed on television about his stance on abortion. He stunned the world when he said, “If it’s a legitimate rape, the female body has ways to try to shut that whole thing down.” The comments prompted immediate public backlash, and experts quickly dismissed his pseudoscientific claims. Around 1,400 people took to Twitter to share a 1996 study published in the American Journal of Obstetrics and Gynecology, which had found that an estimated 32,101 pregnancies result from rape each year in the U.S. (Unsurprisingly, 82% of the tweeters originated from the U.S.)

Just what we were looking for: the rape/pregnancy FACTS. bit.ly/Or6zWi (Thanks @20tauri)The reason I love Twitter: instant info! — Carolyn Porco (@carolynporco) August 19, 2012

When sharing beliefs on politics and society online, many used recent scholarly research to support their opinions. Two popular articles that led to highly-politicised tweeting concerned rather unusual topics. Interest in U.S. politics likely helped to boost the buzz around an article in Psychological Science which suggested a link between lower “cognitive ability” and prejudicial viewpoints – for this paper, 47% of tweeters originated from the U.S. A different study about the relationship between higher social class and unethical behaviour (published in the Proceedings of the National Academy of Sciences) prompted attention from Japan (28%) and the U.S. (24%).

In November, we talked about the reactions to this 2012 article that appeared in the Proceedings of the National Academy of Sciences. The article revealed hidden biases of senior-level principal investigators (of both genders) in the favour of male students, and prompted some excellent blog posts, along with great discussions in blog comments. Judging from the online attention, the article appeared to have reached its intended audience, but still, we concluded in our “Interactions” post that, “[w]hether the combined academic and online focus on the results of the … study could actually help to improve the gender balance for early-stage researchers remains to be seen in the coming years.”

Pinterest, which allows users to contribute images, links, etc. to create visually-based social media “pinboards”, is one of the services that Altmetric tracks for attention to scholarly literature. Although not as popular for science as other social media platforms are (i.e., Twitter, Facebook), some papers with extremely interesting figures do get “pinned” quite frequently. A striking photograph of a man with one side of his face ravaged by sun damage appeared in the New England Journal of Medicine, and was pinned on Pinterest 10 times (far more than is typical for most science papers), in addition to being mentioned on other forms of social media.

The last 2 articles on our Top 10 list relate to big topics in popular culture – namely, music and video games. With discussions about the properties and evolution of popular music (see paper #9) and figures that are actual screenshots from Super Mario Bros. (see paper #10), the wide appeal of these papers (which both initially appeared as pre-prints on arXiv) shouldn’t really come as a surprise, in spite of the technical content. Still, seeing multiple online mentions of paper #9 startled at least 1 post-doctoral researcher on Twitter:

Meanwhile, the scientific analyses of early video games in paper #10 appeared to give some tweeters re-assurance:

From all of us at Altmetric, we wish you a safe and happy holiday. We hope to see you back here in the new year!

5 Responses to “Interactions: The Year in Conversations”

What were the top papers of 2012 on social media? : Nature News Blog

[...] catchy, and most, if not all, made international news media. Update: Altmetric have now posted an up-to-date listing of the top 10 articles, with more details on the online conversations around each paper (for [...]

[…] to reflect on another fascinating year of scholarly conversations. Last December, we put together a list of the top 10 most popular articles from 2012, which was also publicised by the Nature Newsblog. Throughout the year, we also presented our […]

[…] out Altmetric’s posting that’s an up-to-date listing of the top 10 articles, with more details on the on line conversations around each paper. If […]