A few weeks ago Altmetric’s Head of Implementation Natalia Madjarevic and I sat down with Ashley Casey, Senior Lecturer in Pedagogy at Loughborough University, to talk about his experience using Altmetric data; how it helps him in disseminating and tracking his work and why it’s a necessity when having work published in an online journal.

On his role and research

Once Ashley began his first position in academia he wanted to stay in contact with the teaching community he was previously a part of so started a blog and used Twitter to disseminate both his own and other’s research. The blog also provided a forum for discussion around the topics he wrote about and by using Twitter he was able to engage with the both the practitioner and the academic communities to promote his work and get himself established.

When looking for who to publish with Ashley explained that these days he prefers to go with companies who are ‘further ahead of the game’. Publishers he has worked with recently have offered added incentives such as 50 free e-copies of his research to share and display the Altmetric donut and score for his papers on their website.

On using altmetrics for communication with colleagues in teaching

A key challenge was that many of his colleagues in schools (often those encountered through social media) assume that they don’t have access to online journals and that the only way to view research online is through the library. Certain publishers are breaking down this perception, including Routledge who often make top Altmetric scoring papers free to view as well as providing free access to papers after publication that are award winning or deemed to be significant.

On blogs and slogs

To maximise engagement with his work, once Ashley publishes a paper he produces a ‘slog’ which is a ‘slideshare version of the paper in the form of a blog’. The ‘slog’ provides a summary of the paper, which can receive up to 2000 views. When sharing papers written by other researchers he will tweet including an image of the abstract with the link. As well as this Ashley would also write a blog with the aim of making it accessible to teachers, and has now produced a total of 140 of these blogs over a three year period.

On support from Loughborough University for research promotion

‘Loughborough do a lot of knowledge mobilisation’ they support and see value Ashley’s work and the effort he has put into getting his and other’s research noticed. He explained: ‘[his] job isn’t just to publish research, it’s to publish research that people read’.

Ashley uses the Altmetric Explorer for Institutions to track some of his older papers as he finds it interesting to see which papers get picked up without promotion. He finds it helpful to see how the timeline of attention changes between the article being published, being made free-to-view for a short period, and then being put back behind a paywall.

With the Finch report advocating strongly for the open access availability of all UK-funded research publications, this resulted in many institutions receiving additional OA funding but still struggling to meet the associated costs. Alongside this publishers are also being asked to more proactively encourage and support sustainable OA publishing models that offer a solution for all stakeholders.

Ashley says he finds the Altmetric data useful to help identify and prove the worth of immediate OA publishing – the more available something is, the more likely it is to get shared and discussed. Using the Explorer for Institutions to prove that his articles are in the top 5% of those that have received an attention score from Altmetric is invaluable

On reporting and being asked about impact

When reporting on his research to his institution during reviews, Ashley explained that the institution chooses which impact metrics to take into account and it’s not usually a single paper, but a body of research. This is where altmetrics come in handy to back up the impact of his research, and indeed Ashley is already taking steps to incorporate them in his reporting. He believes that the more his university supports altmetrics the more it will become more part of the process in the future.

On what he finds accessible about altmetrics

Seeing a number that represents the reach of attention for an individual research output and being able to compare it with other work, both his and others in his field, is the main benefit of using Altmetric for Ashley. Using these tools he can easily pick out insights that can be directly applied to his future work, and used to improve the reporting and dissemination of research. It also helps him to understand which platforms best support his work and to develop strategies to  expand the reach of the work he is doing. 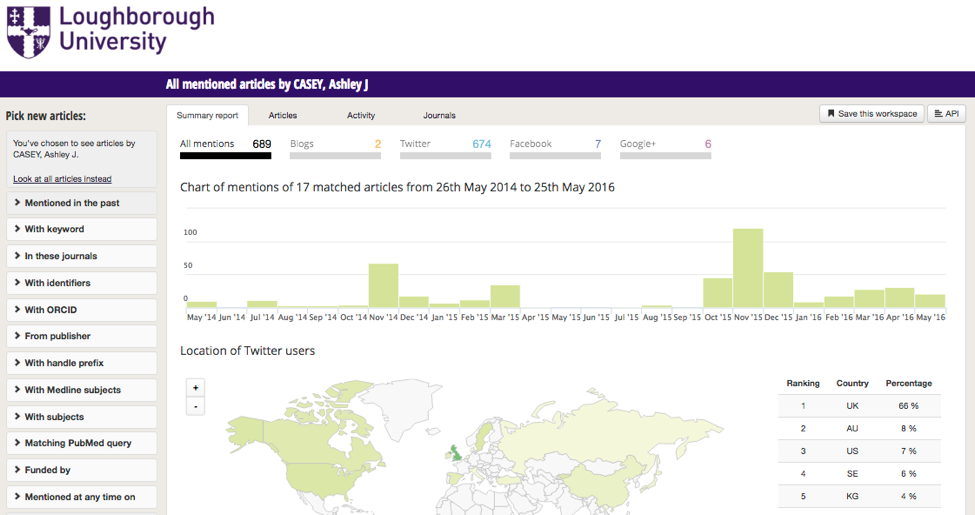