The score in the middle of the Altmetric donut visualization gives you a quick idea of the level of attention that a paper has received. We get a lot of positive feedback from authors about it – but we also sometimes hear legitimate worries from some editors and institutional repositories that it might make researchers think that they’re being judged. It’s a tricky balancing act: we want to make the data as easy as possible for users to get into and explore, and to help identify articles around which there’s a lot of buzz, without sending the wrong message that numbers are more important than the underlying data (Phil Davis wrote an interesting post on the pros and cons of different altmetrics visualizations at the Scholarly Kitchen last year).

So we’re announcing two things today. The first is that the donut style embeds now all have the option to hide the score – just set the data-no-score attribute to “true”

The API documentation has been updated with an example.

… when users click on a donut without a score they’ll see a details page that de-emphasises it too. We’ve kept the score tab so you can still put the level of attention in context: 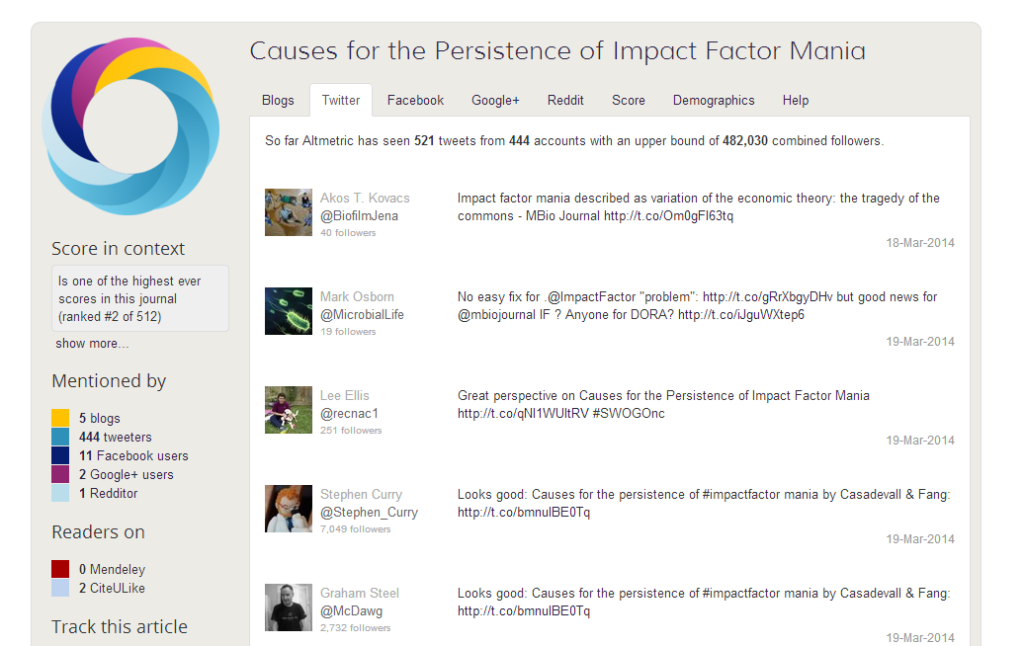 Secondly we’ve rewritten the page describing how the scoring process works to make it easier to understand.

The score is a tricksy thing, given that it’s meant to compare apples to oranges. It’s necessarily subjective but openly so and a key aspect is that it’s consistently subjective in the same way to every single article.

What we’re wondering about now is how to reflect the volume of attention that a paper has gotten without a number, and we’ll be rolling out new visualisations over the coming months that address this issue.

In the meantime, the change is live so feel free to experiment!

12 Responses to “Kick out the jam: scoreless donuts now available”

We added an option to hide the score in @altmetric donuts. As a single tear rolled down my cheek. http://t.co/uwjW4zfZw4

.@altmetric now offers scoreless donuts, is working on ways to reflect level of attention w/out numbers http://t.co/7taaBncXsp via @Stew

Our friends at @altmetric now offer the option of badges without a numeric #altmetrics score included http://t.co/si2K2C1x90

Very happy to see this development from http://t.co/DY5w8MMPxV: http://t.co/hqLZWzyAob No more "one number to rule them all" #altmetrics

#Altmetric donut style embeds now all have the option to hide the score – http://t.co/kVdvwAFRkS #altmetrics

#2amconf Interesting that Bookmetrix donut doesn’t have score. Reminds me of fave ever blog title “Kick out the jam” http://t.co/cFU2AyYw2r