Over the last few years I’ve had the chance to talk with dozens of universities and research institutes who’ve had funding from the European Commission’s Horizon 2020 programme, whose evaluation dates are now, to many a sweating researcher’s brow, looming ever closer. During that time, one of the most keenly sought after areas for support from the Altmetric service has been that part of funding evaluation known as “Innovation Actions”.

Innovation is directly tied to Funding

“Innovation Actions” are critical measures to the success of the research being funded by beneficiaries of the Horizon 2020 program, and by extension to the success of the Horizon 2020 program itself. Rather than the more familiar forms of evaluation such as providing evidence of scholarly traction (hitherto citations and associated citation metrics), or social impact found via the monitoring that Altmetric has offered for years, instead the evaluation of Innovation Actions demands evidence of technical developments and improvements brought on by, inspired by, or itself claimed by the research performed. Firm demonstrations of improved products, processes and services are required to satisfy this set of criteria. And the source most relevant to demonstrating innovation actions defined in this manner is as intimidating, hard to track and detailed as the research itself: patents. 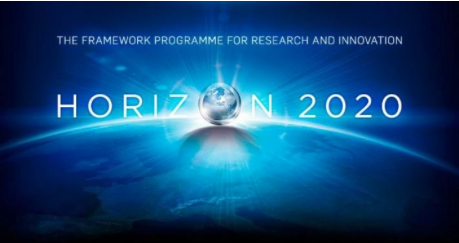 Many research projects will produce patents along with journal articles, reports, conference appearances and other materials. These patents make the case all by themselves that innovations have been performed. However, the much harder problem, and in my view the more interesting one, is trying to track where your publications have made their way into patents which have been filed by other people, in perhaps far-flung areas of the world, and with little or no connection to your own institution.

This is what we would expect given the well-known serendipity of science; ideas cross borders and make their way into technical documentation, grey literature or policy documents, sometimes used in surprising or unexpected ways. It’s why we publish (and cite) to begin with.

But finding your publications re-used within patents, especially if you are looking at many publications for your evaluation, is a challenge not to be attempted by hand. Not only are there multiple jurisdictions in need of being checked, the tools for searching patent literature for non-patent citations vary across different portals, and are not easily pulled together and then presented alongside contextual metrics and other information.

When Altmetric launched its latest attention source this month, by beginning to display which patents have referred to a publication in their citations, it was the researchers who are in need of demonstrating Innovation Actions whom I thought of first. It’s now possible to extract compelling narratives about the knock-on effect of your paper upon inventions, renovations and innovations across the world.

Research in Europe, Innovation in the States

We can find interesting examples by looking at some data in the Altmetric Explorer. For example, the article Highly efficient CRISPR/Cas9-mediated knock-in in zebrafish by homology-independent DNA repair from 2014 features a rich list of academic affiliations, including INSERM and Heidelberg University. CRISPR is a hot topic, and has promise for major innovations across not just Europe but the world. Looking at the Altmetric details page we can see broad and impressive attention across several of the sources of attention which Altmetric tracks.

Notably, this publication has been cited on page 252 of a National Academies Press policy document Human Genome Editing: Science, Ethics, and Governance where it is listed as a reference for the Appendix “The Basic Science of Gene Editing”. The stated goal of that appendix is to provide a detailed and technical understanding of This publication has informed policymakers’ understanding of the subject directly. 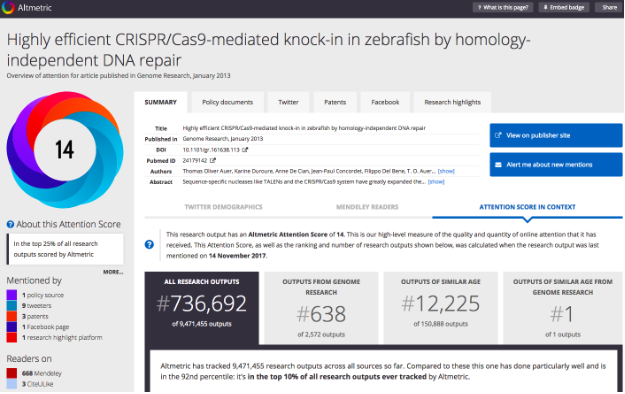 Aside from this, as well as the impressive social media and F1000 attention this article has gathered, Altmetric now shows that three patents also make reference to this research. Two of them are assigned to Caribou BioSciences, and another to co-assignees from Broad Institute and MIT.

Seeing research reused in patents, within several commercial settings, as well as reflected in policy and social media allows for the academic authors involved in the original research to draw a clear and compelling line between the basic research conducted on zebrafish gene manipulation, and real-world outcomes and innovations which apply the methods within other areas, such as, in the case of the MIT/Broad Institute patent (available here) the fight against cancer.

Applied Innovations are critical to the acceptance of basic research

Other than providing evidence for funding evaluation practises, I’d like to adduce one more reason why this sort of attention is important: it helps with the  Several years ago a debate erupted about the NSF’s funding of what was poorly characterised as “Shrimp on treadmills.” Endless claims were made about government waste on silly research, leaving the NSF to have to release explainer statements and videos. But the damage was done and the headlines had been written. People associated some basic research with “government waste”.

One can make an identical (and equally false) claim about editing the genes of zebrafish. If the title or abstract do not make for immediate clarity on the per se usefulness of the research, it can become a challenge to make the case for money well spent and relevant research having been conducted. But as we have seen, basic research promotes innovations in new fields of research, in new countries, and for new use-cases.

The risk of defunding of vital basic research increases when the dominant discourse focuses on a misunderstanding of the vital nature of research in unusual fields. Simplistic discussion of the role which research projects can lay in innovation and societal betterment can lead to populistic and poorly thought-out demands for “reduction in government waste” (read: “defunding of key basic research”.) But answering such cries is immensely hard for researchers if they don’t have the sort of tools which Altmetric provides.

When Altmetric began, it was to enable researchers to be able to claim all the credit for their research, rather than just scholarly attention via citations. With the patent data added to Altmetric, research groups can now respond to the “Innovation Actions” and can help educate the media and the public on the real relevance of research projects beyond their prima facie appearance.