Since its launch in 2001, Wikipedia has quickly grown to become the largest electronic encyclopedia in the world. The English version alone contains over 4.7 million articles, and as of February 2014 there were nearly 500 million unique users and over 73,000 active editors.

Within those millions of articles exist hundreds of thousands of links to academic research. Publishers, institutions and researchers are increasingly moving to leverage the exposure and traffic that a reference on Wikipedia can generate for their content. Although the value and relevance of that traffic is sometimes debated, for their part Wikipedia enforce strict editorial guidelines to try and ensure that quality and standards are consistent across articles, and that undue bias isn’t shown towards over-zealous posters.

There’s a long standing connection between Wikipedia and altmetrics – Dario Taraborelli at the Wikimedia Foundation is one of the authors of the altmetrics manifesto, and he’s doing a lot of great work with groups like CrossRef on helping to make Wikipedia data available for altmetrics tools and research projects, and to help set standards around its use and presentation.

Adding Wikipedia to the list of sources we track has been a goal of ours for a while, and in the course of working on an exciting new project with Springer, one of our customers (more on that at a later date), we had the chance to spend some time on it. We’re really pleased to be able to announce that any mentions of articles or other academic outputs in Wikipedia will now be reflected in a new ‘Wikipedia’ tab on the Altmetric details page.

In order to capture these mentions the academic output being mentioned must be referenced with proper Wikipedia citation tag – see http://en.wikipedia.org/wiki/Wikipedia:Citation_templates for information on how these work. We capture that as a mention and add it to the details page for that output. Users can then click on the heading to be taken to the original Wikipedia article, on the username of the person who wrote the mention to see their profile on Wikipedia, and on the date stamp to view the edit record for that article: 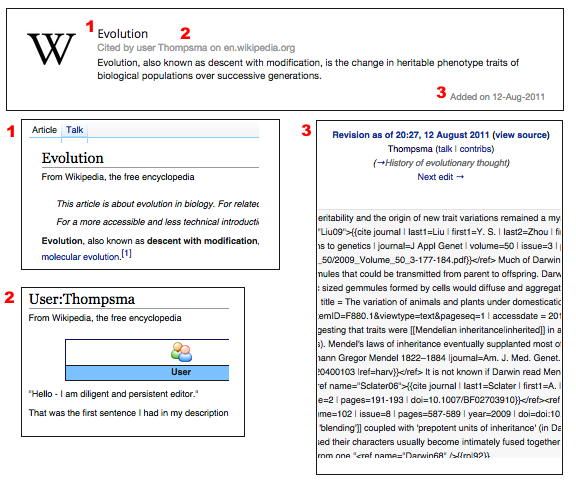 Because we’re looking for lots of different identifiers and have some constraints around auditability – every mention we collect has to have an author and a timestamp – we wrote our own system to get the data out in the format we need but we’re hoping to share tips, approaches and data with others in the community.

Excitingly, this means we now have a new colour to add to the Altmetric donut! From now on Wikipedia mentions of a research output will be visualized by a dark gray color in the donut. Any mention in Wikipedia (or even multiple mentions) will add a flat count of 3 to the score (so even if an article is mentioned 3 times across Wikipedia, it will still only add 3 to the score). 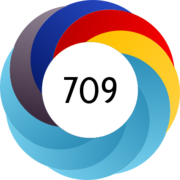 For now we’ll just be tracking the English language version of Wikipedia, but we’ll be adding all of the other language versions over the next few months. Also please note that to begin with we’ve had a big load of historical data to update all at once, so some of it is still feeding through to the details pages – but give it a week or so and it should all be up to date.

The addition of this source will lead to increased coverage in terms of the number of research outputs we’ve captured any online activity for. Wikipedia references are a key driver of referral traffic for publishers and institutions, and collating the associated references allows us to more accurately reflect the broader engagement surrounding a piece of research.

We’re certainly not the first to notice this trend. A number of scholarly content providers and research institutions have taken the step of employing a Wikimedian in Residence to provide outreach within their community, and to ensure that their research is represented appropriately. The Bodleian libraries in Oxford are currently hiring their very own curator, and several national libraries and museums have also invested in this role. At the Royal Society of Chemistry (RSC) in the UK, they have not only hired a Wikimedian, but also extended fully open access across all of their content to active Chemistry Wikipedia editors.

Andy Mabbett, Wikipedian in Residence for the RSC, notes that “Wikipedia is the first port of call for both students and lay people seeking information about chemicals and other chemistry topics. Recognising the importance of providing citations to reliable sources as part of Wikipedia’s policy of verifiability, by which readers can be assured that its content is reliable, the Royal Society of Chemistry is delighted when its publications are referenced by Wikipedia editors, and it is in the interests of all concerned that such citations are clear, precise, unambiguous and formatted in a standard manner, both for the convenience of humans, and to allow parsing by computers.”

Andy reports that the response to their efforts to date has been “overwhelmingly positive”, and that there is already a large amount of interest for a program of public engagement events that he is planning to run later in the year.

Combining the Wikipedia references together with mentions from the wide variety of sources that we already track will allow researchers, institutions and funders to quickly and easily see where their article has been referenced on Wikipedia, and how that fits in to the broader picture of the attention it’s received. This in turn can help identify gaps,  uncover opportunities for further outreach or more extensive curation, and give context to reading material.

If you’ve got questions or comments about this new source please do get in touch – you can email us at support@altmetric.com, or send us a tweet @altmetric.

#Altmetric to track #Wikipedia as a source. My profs would have been aghast. Times have changed. http://t.co/Kosmun7X6X

@altmetric have expanded coverage to include journal mentions in Wikipedia http://t.co/6nhkorzXdF

Mentions of research in @Wikipedia will now be reflected in @altmetric's new ‘Wikipedia’ tab: http://t.co/YuPlzrLCSb http://t.co/6F2d6dT7cA

This is an interesting development. Does "must be referenced with proper Wikipedia citation tag" mean than e.g. {{cite journal}} is counted but not {{cite doi}} or {{cite pmid}} (it looks that way)? There are quite a few citations in those last two categories see

Can you link the code used to identify the editor who added the citation? Thanks. Cf. https://meta.wikimedia.org/wiki/Research:Content_persistence

Altmetric is now tracking Wikipedia (English-only for the moment) - http://t.co/grTlf2kgkh

[…] is now tracking Wikipedia. “Adding Wikipedia to the list of sources we track has been a goal of ours for a while, and […]

Hi there, You've doone a great job. I will certainly digg it and personally suggest to my friends.
I'm cnfident they will be benefited from this web site.

@generalising some more info in the comments on the #wikipedia {{cite doi}} / {{cite pmid}} issue http://t.co/GJbtw8I9XZ via @altmetric

[…] likes of social media and newspapers. Altmetric.com measures the digital impact of articles, and recently announced that they are now including Wikipedia in their […]

@MariosDVM which one is your article? we need them to be formally cited using the wikipedia citation tag - see http://t.co/2UwIIkt226

[…] are now including Wikipedia citations in their scoring. I’m quoted in their announcement. Andy Mabbett (Pigsonthewing); Talk to Andy; Andy’s edits 13:46, 4 February 2015 […]

[…] wikipedia for references too e.g. see http://nature.altmetric.com/details/961190/wikipedia and http://www.altmetric.com/blog/new-source-alert-wikipedia/, however the source data is not freely […]

Librarian as Teacher: Ways to use Wikipedia | International Librarians Network

[…] Impact of Scholarly Articles and Books?” (Note: we especially enjoyed reading this article, as we began tracking Wikipedia citations in […]

[…] Highlights of 2015 for us have included launching the Altmetric Ambassadors program, announcing Wikipedia tracking, adding support for The Conversation articles and Clinical Trials, and building the Bookmetrix […]

@sarabeee @smithsonian yes, it is a part of @altmetric's grab bag. Read their blog post for more details: https://t.co/trxVuA3mVY

[…] it up and referenced it in their advice, or has someone thought it relevant enough to include in a Wikipedia […]