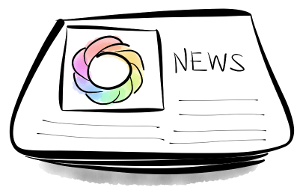 Before we jump into our latest news, we would like to extend a warm welcome to Paul Mucur, who recently joined the Altmetric team as our new Chief Technology Officer. Previously, Paul worked as a technical lead for Nature Publishing Group. Independently, he was also part of the team that created the awesome SciCombinator project for last year’s Rails Rumble competition.

Altmetric shortlisted for the 2013 ALPSP Award for Publishing Innovation

Altmetric has made it to the list of finalists for the 2013 Association of Learned and Professional Society Publishers (ALPSP) Award for Publishing Innovation. We’re extremely excited to have been shortlisted alongside Drama Online, figshare, Nature ENCODE, and PeerJ. Following the announcement of the finalists, we contributed a guest post about Altmetric on the ALPSP blog. The winner of the award will be announced on 12 September during the ALPSP International Conference. 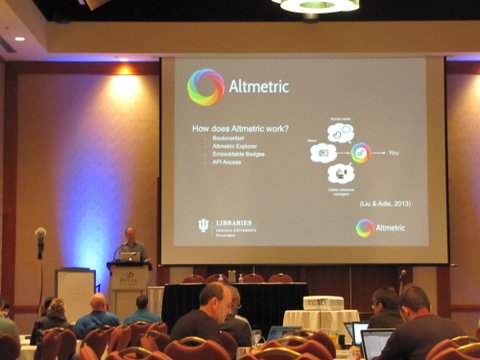 James Halliday, presenting a talk at Open Repositories 2013 about the ease of implementing Altmetric into the IUScholarWorks repository.

In early July, Jean attended Open Repositories 2013 in Charlottetown, Prince Edward Island, Canada, where she spoke to attendees about Altmetric’s free services for libraries and institutional repositories (IRs). The main message we delivered was this: if you’d like Altmetric to track the attention surrounding your repository items (and merge this attention with any buzz around versions of the same article that appear elsewhere on the web), then it’s important to let us know some important things: 1) your IR’s domain and 2) what scholarly identifiers that your IR uses. Once Altmetric is tracking attention surrounding your IR, it’s free and easy to implement the badges (see our “Getting Started Guide”) or data from the API (see documentation) into the IR’s platform. During Open Repositories 2013, James Halliday (Indiana University) gave a great presentation that detailed his experiences of implementing Altmetric into his repository, IUScholarWorks. (James’ presentation slides can be found here.) 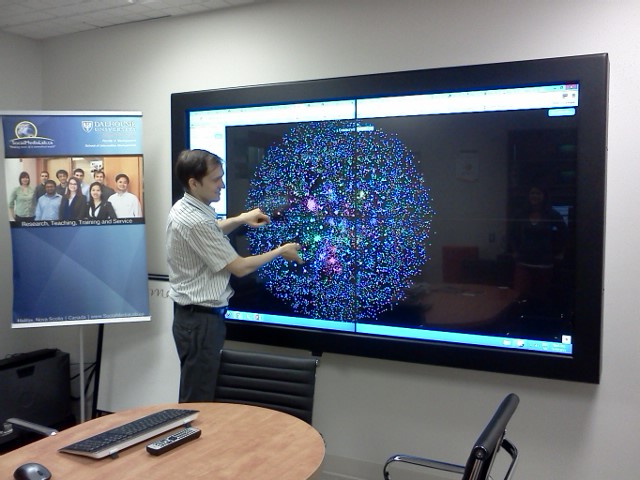 Dr. Anatoliy Gruzd, using a giant touchscreen to demonstrate how Twitter networks are visualised in the Social Media Lab at Dalhousie University.

After Open Repositories 2013, Jean made a stop at Dalhousie University in Halifax, Nova Scotia. There, she met with Dr. Anatoliy Gruzd and his research assistant Sarah Visitini, and got the grand tour of the Social Media Lab. The Social Media Lab actively develops interesting web tools, such as Netlytic and AcademiaMap, and is also known for its fascinating research into the ways that social media influences aspects of society (including academic discourse and politics). As you might expect from a social media-related lab, the workspace is quite high-tech, and feature numerous tablets and a giant touchscreen (see photo) that can be used to browse through massive visualisations of social media networks.

While in Halifax, Jean also interviewed the authors behind the famed Winnie the Pooh paper and delivered a departmental seminar on science communication and altmetrics (hosted by Dalhousie’s Department of Pharmacology). Her talk at Dalhousie was recently mentioned in a blog post by a Dalhousie MLIS student.

Yesterday, we released a joint press release with QxMD, announcing that Altmetric data will be integrated into Read, a medical and scientific research reading app for iOS that searches PubMed for full-text articles. Read will now use the Altmetric API to help enhance the process of article discovery in the app. For more examples of cool websites and apps that our API has been used for, check out our API Gallery.

A lot of interesting altmetrics-related reading material has come out in the past few weeks. On the blogosphere, we saw an interesting post by Keith Bradnam, which shows a word cloud of titles from the top 10,000 articles listed in the Altmetric database. There was also this blog post by Jeffrey Beall, which was highly critical of article-level metrics – Euan has now written a response, representing the views of Altmetric.

Some more scholarly publications on altmetrics have appeared recently – notably, Jean and Euan published a new article in UKSG Insights, called “New perspectives on article-level metrics: developing ways to assess research uptake and impact online”. The article discusses three main ways that article-level metrics can be used: 1) to assess an article’s uptake or impact within a particular online community, 2) to assess the overall impact of a body of scholarly work, and 3) to characterise entire author and reader communities that engage with particular articles online.

Another noteworthy read comes from the National Information Standards Organization (NISO), which has published an entire issue devoted to altmetrics in their Information Standards Quarterly (ISQ). The summer issue, which was guest edited by Martin Fenner (technical lead on the PLOS ALM project), contains a great set of articles written by experts from the altmetrics community.

Finally, there’s a new pre-print available on arXiv entitled “Tweeting biomedicine: an analysis of tweets and citations in the biomedical literature”. This study looked at the usage of Twitter for communicating about biomedical and life sciences journal articles, and sought to find any correlations between tweets and citation counts. (The Twitter data used in this study were provided by Altmetric, and were also used in this 2013 PLOS ONE paper. We plan to post a bit of follow-up data soon with respect to the new arXiv pre-print, so stay tuned.)

Updates at @altmetric, incl. summary of my trip to Canada to attend #OR2013, meet @dalprof, and speak at Dalhousie U: http://t.co/pjPyCEZqJM

[…] (She made her Altmetric blogging debut this week in the most recent news roundup.) In the summer, we welcomed Paul Mucur to our team as our new Chief Technology […]