Last December, the Natural History Museum in London announced the exciting news that it had made a group of datasets available for free online. Hosted on their Data Portal, these datasets are easily downloadable and often in a CSV format. Not only are these datasets free and easy to access, they are also each assigned a unique identifier, specifically a DOI.

One of the huge benefits of assigning these identifiers it that it makes it much easier for the influence and reach of the work, both within and beyond the academic sphere, to be tracked. Thanks to those identifiers (which could also have equally been a canonical URL or other scholarly ID) altmetrics providers like Altmetric and ImpactStory can now track how these datasets are being shared. Traditional citation counters can show where the data is being referenced and cited in research.

All of this means that the museum itself can get a much better sense of who is engaging with their materials, and how they’re being disseminated and used.

These easy to access datasets are great way for anyone to have a dig around and see what kind of data is generated within the museum. Along with the new datasets, the Natural History Museum now has a public REST API. Their API is also free to use, meaning anyone can use the data for research, or to build an app! There’s potential there for some really creative work.

One of The Natural History museum’s first deposits was their announcement to kick-off the project. As it had an identifier (they gave it a DOI) Altmetric was even able to track attention to the announcement itself. You can see the details page for the announcement here: 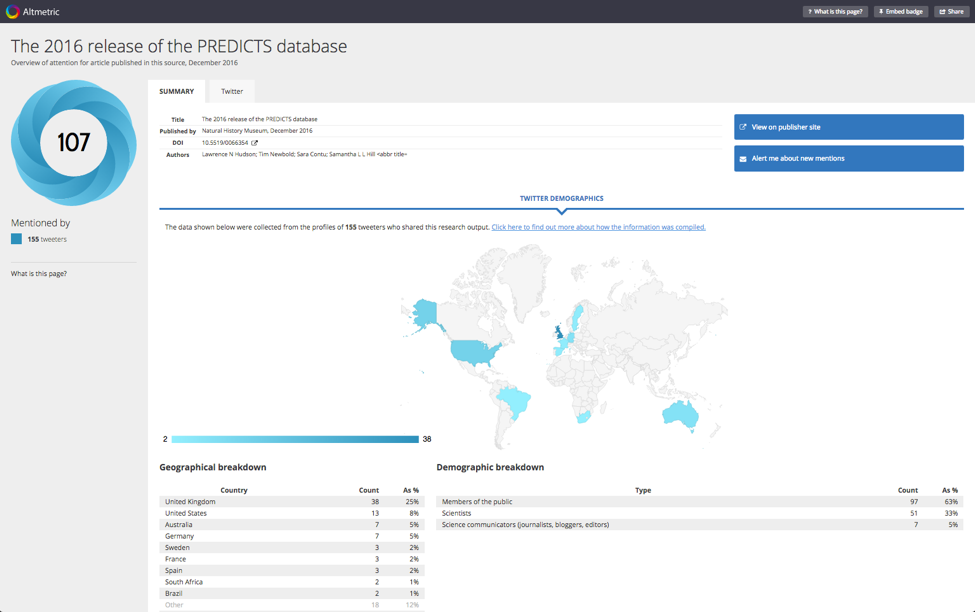 Lots of people around the world were excited about the announcement, with Twitter attention captured from United Kingdom, South Africa, Sweden, Australia and more!

Twitter Map representing the international attention to the announcement

The announcement was even shared on Twitter by the Intergovernmental Platform on Biodiversity and Ecosystem Services, where it will have been visible to their 5,806 followers. 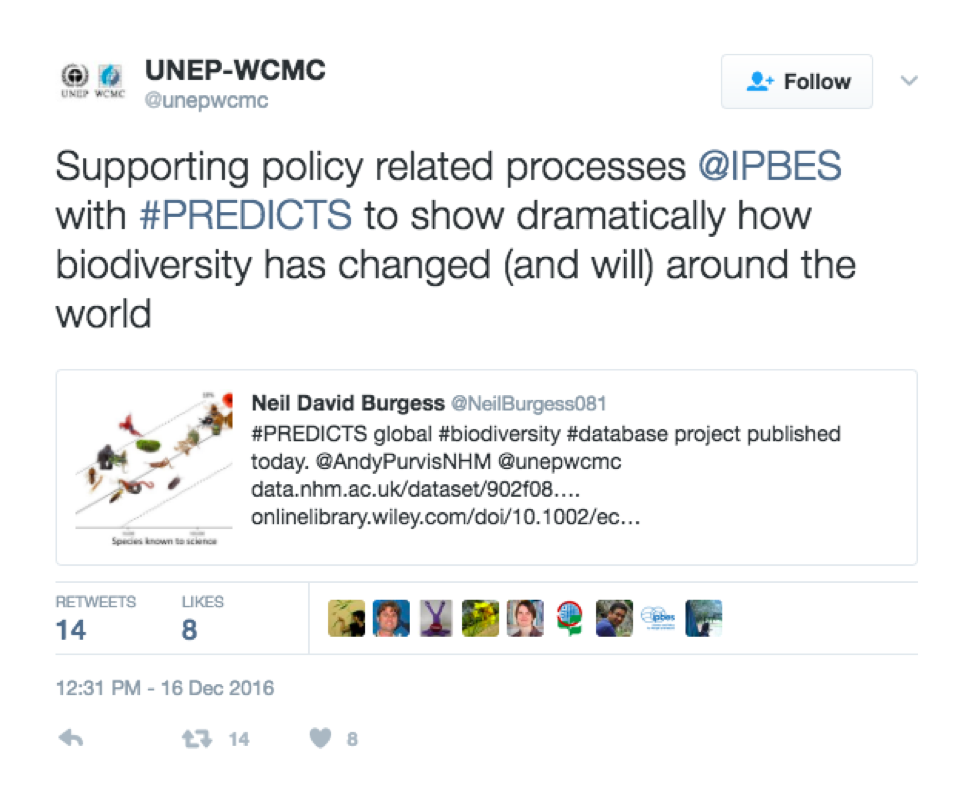 Interest continues to grow as the news spreads: the most recent mention came in just last week on Twitter.

Collection specimens is one of the datasets to which Altmetric has tracked attention, and a festive tweet from the team at the museum proved popular amongst their followers. You can view the details page here: 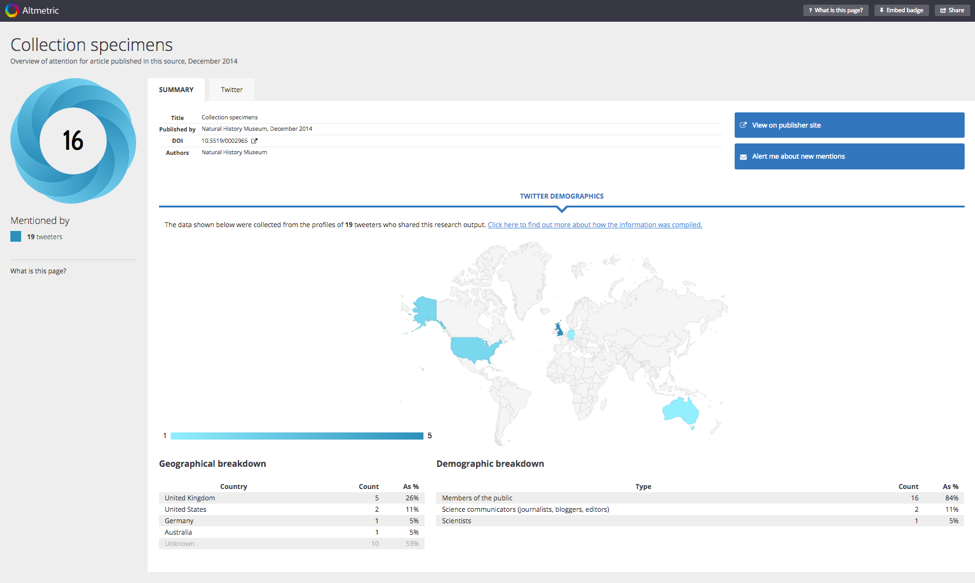 This dataset has the list of all the specimens held within the enormous collection held at the Natural History Museum. Not only does the record allow you to download the full dataset and view the metadata, it also presents the data in interesting visuals. The below image is of the map representing where all the species are found in the world! The interactive maps lets you play around with the data and shows the vast-ness of the collection:

Excitement about the availability of collections data was seen across different users on Twitter. The Natural History Museum Digitisation Twitter account’s original tweet was retweeted by 18 users, and received 48 individual likes: 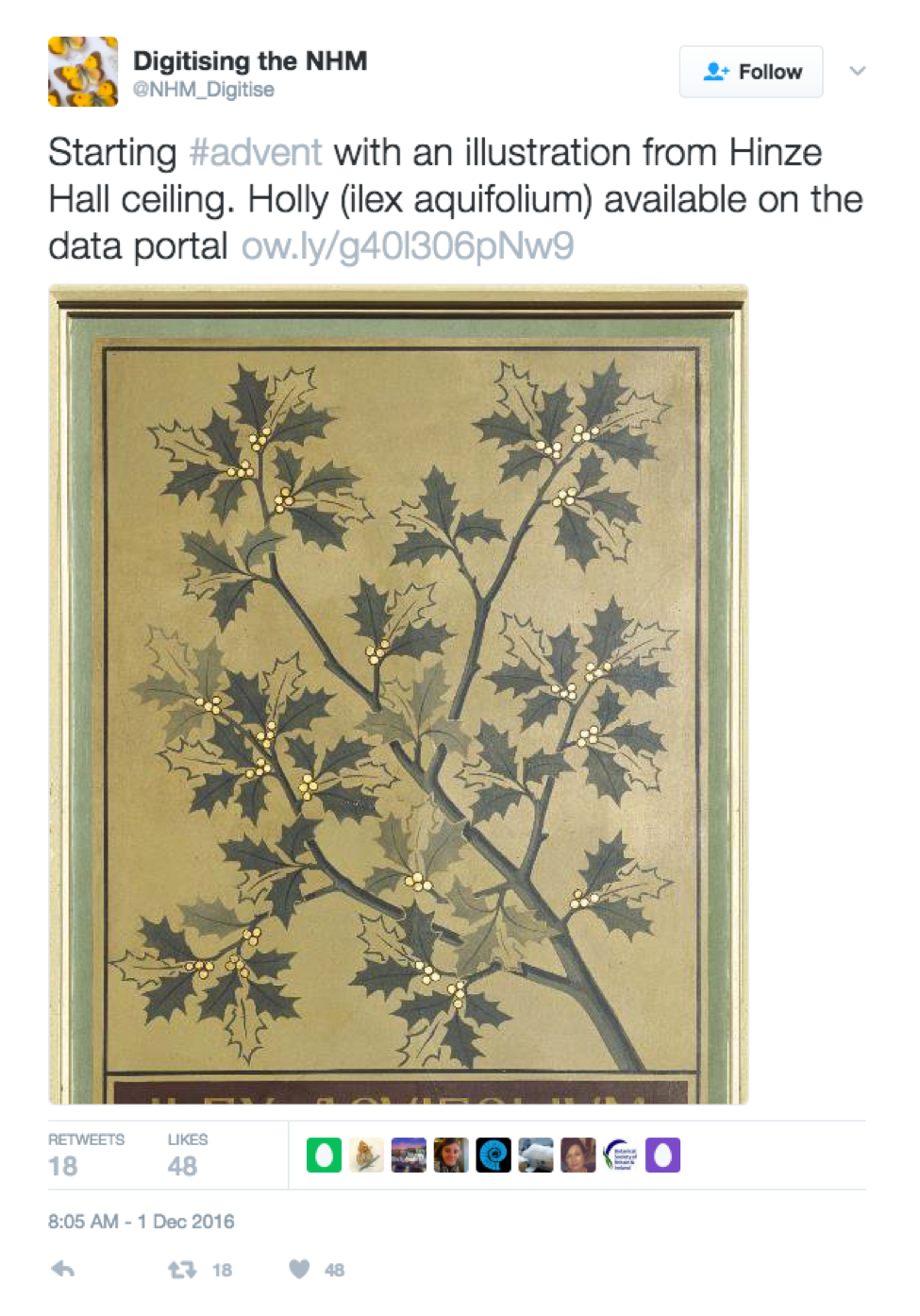 Users that retweeted ranged from individual accounts with 6 followers, to the Botanical Society of Britain & Ireland with more than 11,000 followers.

This range is a great way to see the different types of users that are interested in this available collections data.

The movement for open and available data has previously been a part of the mandates of other museums who now make their data available online, mostly via data files or API. You can even see museums that will have GitHub repositories, such as the Museum of Modern Art in New York (here’s their repository). Cooper-Hewitt has a free public API (here’s their documentation), with their data available as part of their open source mandate.

The Natural History Museum’s decision to make all of this data free and assign unique identifiers is an exciting decision and a great example of just what could be achieved. This Data Portal is a great way for users across the world to have access to high-quality data for research purposes. By making these datasets available, free to use, and interactive, the Natural History Museum has also opened the door for a broader audience to engage with and benefit from their resources.
It will be very exciting to see how the datasets are shared and used in the following months and years, both in the research community and beyond!