In the second post of a new blog series, Head of Metrics Development Mike Taylor explores how Altmetric and Dimensions data can be used to build research narratives. This blog post has also been published on the Dimensions blog.

Sidebar: The subject of this blog came about as a result of a tip-off, from my colleague Dr Juergen Wastl of Digital Science Consultancy. Juergen suggested I take a look at the science of plastic biodegradation, and in particular, the role played by the Greater Wax Moth, or Galleria mellonella.

Mike is very happy to receive suggestions for the blog: please find him on Twitter @herrison or email him at m.taylor@digital-science.com

Concern about plastic pollution has been growing over recent years. Twenty years ago, it was only something that eco-activists worried over: it is now something that governments have seen fit to legislate over. In the UK, a mandatory charge has been levied on single-use plastic bags since 2015, which led to a drop in usage of 85% in the first six months. Nevertheless, plastic pollution is a major issue, with an estimated 300,000,000 tonnes currently floating in the ocean. However, research into the downstream effects of this pollution on human health is a relatively small field. In Dimensions, we can find 170 research publications examining the issue of plastic entering the food chain.

Naturally, the research community is working on how to solve some of the issues. From the science of food storage and transportation to the economics of reuse, there are  myriad fields at work. One of the most interesting, and one that gathers a lot of attention (as identified by Altmetric) is the question of biodegradation: the use of biological agents to degrade plastics into a less harmful form. Some of the science is on what could be done to create plastics that naturally biodegrade, and some on discovering organisms that can degrade existing plastics.

Despite the importance of the problem, and the potential for research to tackle some of the issues around plastic pollution, biodegradation has not been a particularly well-funded area, dropping to only $1M in 2016. Lately, the signs have become more optimistic in terms of funding, and the data for 2019 (clearly incomplete at present) has jumped ahead, to show over $4M funding. 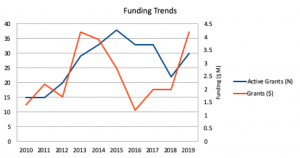 Not unsurprisingly, there hasn’t been a large number of publications in the field either, although the number of reviews is interesting. We’re going to come back to some analysis of the highest performing documents later in this post. 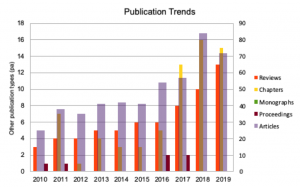 Given the public concern, it’s not at all surprising to see that the Altmetric data in this area is very rich: it’s not often that we see a subject area that gets a lot of News attention and Blog mentions and Policy and Patent citations. But this is clearly an area of study that government and pressure groups are actively working on, and consuming research outputs. 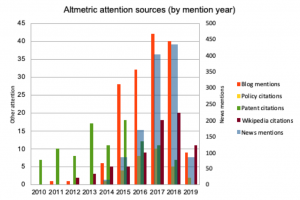 Of the publications from the last ten years, there is an intriguing disparity between research outputs that gather a lot of citations, and those that have high Altmetric Attention Scores.

Looking at the top twenty-five by citations per year, versus the Altmetric score, one can see that only a moderate overlap: only 9 out of the top 25 for both Altmetric Attention Score and Citations per Year coincide. To get an even broader perspective, we can introduce two other data sources – Patents (to represent industrial impact) and Mendeley Readers (an indicator that has been used to predict future citation rate, but may also show engagement by non-citing researchers). Both Mendeley and Citation data are numerous and have been shown to grow over time, so I’m choosing to divide both values by the number of years since publication, to make the comparison a little fairer.

Taken together, these four top 25 rankings contain 68 different research outputs. Only 2 are in the top 25 for all four data – and both are comprehensive review articles. Rather remarkably, almost all of the remaining documents sit in one of four clusters.

Ten publications feature in the top 25 lists for Citations per Year, Mendeley Readers per Year and Altmetric Attention Score – but not in Patents. These publications almost exclusively focus on the potential use of organisms to biodegrade plastics – and these include our friend, the Greater Wax Moth.

More organisms feature in the 22 documents that represent the union between Citations per Year and Attention Score, but haven’t yet made the top 25 for Mendeley or Patents. It’s also in this section where we see the first ecologically-focussed papers appearing.

Using the different sources of data that are available to subscribers to Altmetric and Dimensions support comprehensive analysis of the dynamics of even small fields.

In the case of the biodegradation of plastics, we see the vital importance of reviews, and how they are used by stakeholders in many different groups. We can see the kinds of research that grabs the public’s imagination, but also the work that applied researchers are undertaking to turn pure research from an in vitro phenomena to one that can occur at industrial scale. Each of these sub-fields leaves its own fingerprint in the data, and reinforces the need to use multiple sources of data to understand an area of work in all its nuance, but also the need to critically engage with and understand the implications of these different metrics.

In order to solve a problem like plastic pollution, and how we can reduce the amount of plastic entering the environment, we need to use all forms of human ingenuity. As has been often observed: the most effective actions are to ‘reduce’ and ‘recycle’, but nevertheless science has a huge part to play in addressing waste. Even within a relatively small and under-funded area like this, we can see how this task is being broken down: ‘pure’ research scoring highly in Citations per Year, comprehensive reviews doing well across all data, applied, industrial-scale research exploring issues in ‘scaling up’ attracting attention in Citations and Patents, and intriguing research into often serendipitous discoveries adding exciting new possibilities that attract attention from both the academic and winder populations.

The Greater Wax Moth (https://app.dimensions.ai/details/publication/pub.1085057040) may not itself provide all the answers to plastic pollution, but either its genetics (or that of its gut flora) could very well provide a solution to one of the greatest challenges of our present time.

Sidebar: The Greater Wax Moth itself is inconspicuous: and unless you were a beekeeper, you wouldn’t think twice if you were chasing it out of your bedroom at night. It’s 35-40mm wide, a greyish brown, and it lives across much of the globe. G. mellonella is, unusually, a parasitic moth: it lays its eggs in beehives, where its larvae consume bees that get trapped in its silken threads. Compared to the Lesser Wax Moth, there seems to be a lot of research into G. mellonella: a few thousand papers, compared to a few dozen. In the paper with the highest Altmetric Attention Score, Cambridge and Cantabrian researchers identified an unusual trait: the ability of the larvae to consume polyethene, the material used in plastic bags, producing ethylene glycol as a by-product. 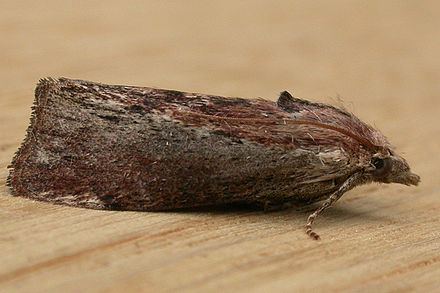 One could easily imagine a sequence of biological agents digesting a mix of plastics in a series of tanks, perhaps creating useful by-products. Moth larvae in one tank, algae in another.