Those of you who are interested in current affairs may have noticed that a certain biomedical phenomenon has occupied much of the media’s attention over the last few months. Since we’ve covered this before, in both webinars and blog posts, I’ve decided to mostly look in a different direction and write about the other things that have been getting attention in the last three months. Not that we can get away from COVID19! As we’ve talked about before, the interest in research into the novel coronavirus has been as immense as the volume of research itself. Previous years have seen a steady level of research into coronaviruses – about 4000 a year – at time of writing (September 2020), Dimensions has already indexed over 100,000 COVID19 research outputs. We estimate that there were more tweets about COVID19 research in the first half of the year than to all of biomedical research in the first half of 2019. For this blog post, I looked at top 506 research outputs that got attention in Altmetric (more on why it was 506 below!)

But other research has not gone away, and neither has society’s interest in writing about it, nor the evidence of social impact. The publications getting the most attention reflect both our current concerns, and also our perpetual obsessions. Putting aside COVID19, we see increased levels of interest in research about social inequality and justice, with papers focussing on police behaviour, the biological basis of sexuality, the happiness of transexual people, and inequalities in health provision getting a lot of attention.

Health, in general remains the research area most likely to be mentioned in the news and on social media. Non-COVID19 research in infectious diseases has been highly active. Much of this research examines other pandemics. In particular, the influenza pandemic of 1918-19 is mentioned several times, with the focus of using that period as a lesson for current times.

Papers about well-being, good mental and physical health are highly discussed, with a particular focus on diet. Psychoactive substances appear in a number of publications (for more on the altmetrics of cannabis, please check out our recent webinar). There were 42 publications looking at the human condition and environment, with another 6 looking at the wider universe.

Papers and discussions on fake news, politics and ethics have widespread appeal, and are vitally important to how science is conducted and reported – an issue which was discussed at the DS Showcase on October 1, 2020. And research looking at researchers is consistently of interest to the wider public, making The Life Scientific, my third most populous category.

Of the 506 publications examined, only 11 fall into a category that might best be met by the reaction “huh”. Newcomers to altmetrics often assume that the majority of highly shared and reported papers fall into this category: however, this percentage has been consistently low since the advent of altmetrics, something I reported as long ago as 2014 with Andrew Plume of Elsevier.

Another assumption that I’ve heard before is that altmetrics has dominating bias towards recency: and again, we can debunk this by looking at the publication year. Only 56% of the top papers were published in 2020, and without COVID19, that percentage would surely be lower).

Our oldest piece of research was published in 1998 – the notorious anti-vaccination paper written by Wakefield. Now long-discredited and retracted, it remains highly mentioned, typically by attention sources discussing the continuing problems in maintaining vaccination levels, and its shattering effect on public confidence in preventative health. An unforgivably outstanding example of bad science, that is likely to have an effect on the eventual uptake on COVID19.

Finally, as a former publisher, I was delighted to read the coverage in Nature of publishers’ steps to remove computer-generated gibberish from their tools – paper #506 – and the reason for my slightly unorthodox sample. 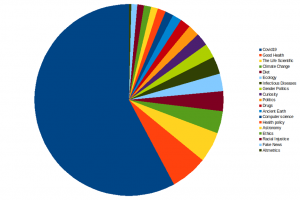 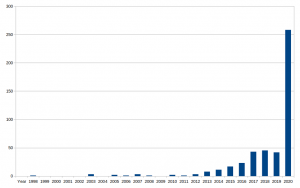