In the depths of the Madagascan jungle, a frog sits next to a pond on the forest floor, barking out its distinctive call – five pulsed notes delivered loudly among the symphony of about 150,000 species that are endemic to the island. It’s relatively new territory for the frog – over the course of several decades, it has been forced gradually higher, by more than half a kilometer between 1993 and 2003 alone, to survive the impacts of climate change. 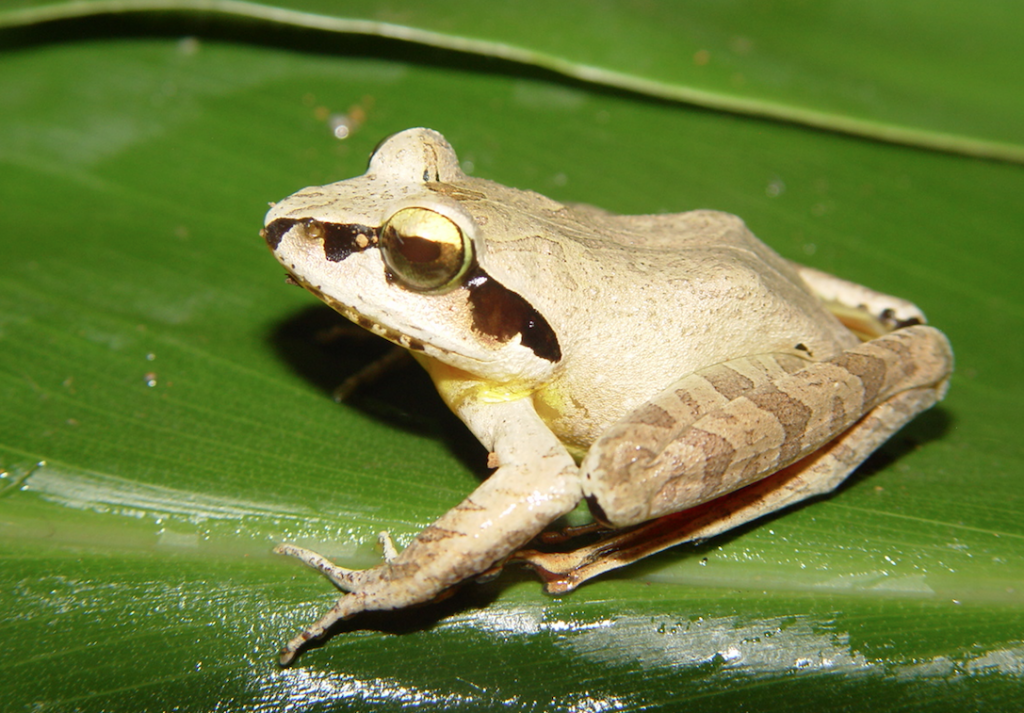 Aglyptodactylus madagascariensis – the Madagascar jumping frog – is just one species already affected by climate change. And it looks like more and more will join the club: according to a study in the Proceedings of the National Academy of Sciences (PNAS), one in three plant and animal species will be extinct by 2050 if climate change continues on its current trajectory.

Read the study: “Recent responses to climate change reveal the drivers of species extinction and survival”

The estimate is based on observations of more than 500 species in more than 500 locations around the world, comparing data from two points in time. The researchers behind the study, Cristian Román-Palacios, a PhD candidate, and Dr. John J. Wiens, Professor of Ecology & Evolutionary Biology, both at The University of Arizona, see the findings as a stark warning that we need to act now to mitigate climate change in order to protect biodiversity.

The study grew out of previous research Prof. Wiens had done, looking at 976 plant and animal species and their survival in local areas. The results showed widespread local extinctions in almost half of the species. Cristian Román-Palacios took this a step further, looking at more detailed climatic data to get a better picture of what was happening, and what we might expect in the future.

Climate change has two main effects on biodiversity – one is the shift in phenology and the other is a shift in distribution. They studied the latter in this research.

“For lots of plants and animals, spring comes much earlier now than it did – birds are coming back, flowers are blooming earlier, frogs are breeding earlier – and that’s a shift in phenology,” Prof Wiens explained. “What you also see is things moving into places that used to be cooler – moving up a mountain or to higher latitudes or toward the poles. When species move away from those warmer sites because they can’t live there anymore, that’s what we refer to as local extinction.” 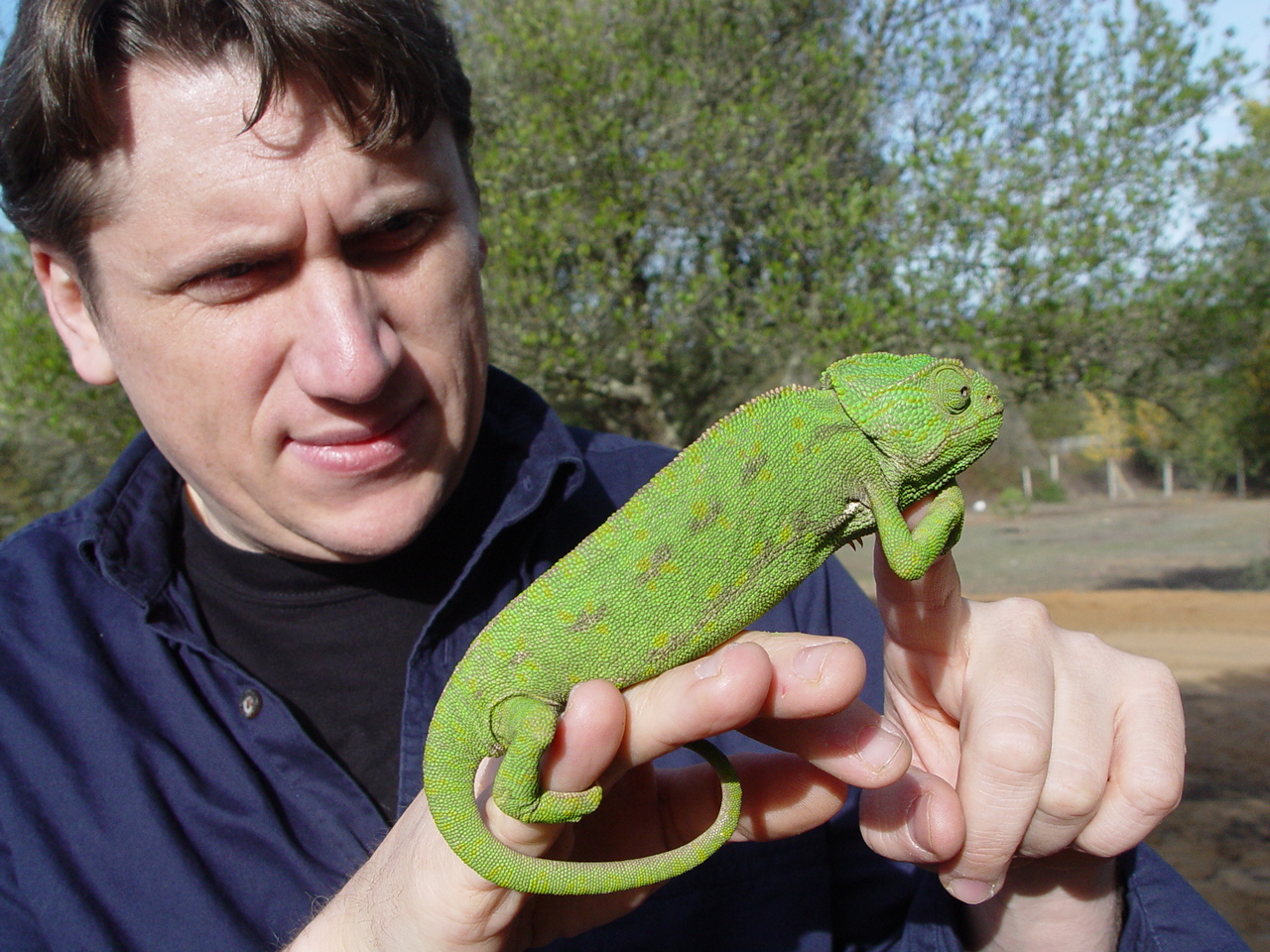 They looked at 538 plant and animal species at 581 sites, comparing data from surveys carried out a long time ago, some dating back to the early 1900s, and more recently, in the last 20 years. They could look at this data next to data on changes in the local climate, and from there, they could predict whether a species will survive or go extinct at a local site.

The data revealed that it’s changes in the maximum summer temperature that drive local extinctions, rather than increases in temperature averaged over the year.

“What you can see, particularly at the low elevations where it’s warmer, is that a lot of species are disappearing,” Prof. Wiens said. “The one most important variable seems to be how hot it gets during the summer. What was really interesting is that changes in the mean annual temperature are positively misleading about local extinctions, even though that’s what people tend to look at.” 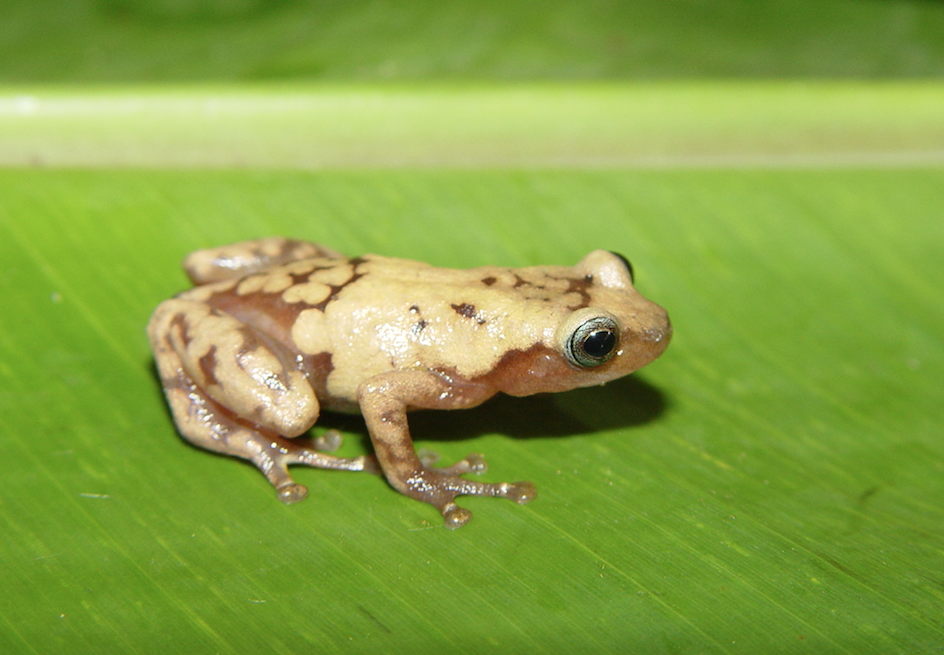 “When you put those three elements together, you can get a relatively detailed prediction of which species are likely to live, and which are likely to go extinct,” Prof. Wiens said. “One of the big take-home messages from the paper is if we don’t curb climate change, we could lose a third of plant and animal species.”

It’s a strong message and a call to action: continue on this path and we will lose a significant amount of biodiversity; change now and we could save a lot of species from extinction.

“We could cut this predicted rate of extinction in half by just following the Paris Climate Agreement,” Prof. Wiens said. “I like to think of this as a ‘choose your own adventure’ situation; it’s not like an asteroid is going to come out of the sky and cause a third of the species on Earth to disappear. It’s our choice as to what happens in the future. We’re going to lose a lot of species, there’s no question, but we have a lot of control over how bad it’s going to be.”

The message certainly resonated with the public: so far, the paper has been covered in 85 news outlets around the world, as well as on social media, generating an Altmetric attention score of 889. In addition to a press release with a catchy headline, the story was boosted by other research that was released at around the same time, helping make the picture clearer.

Discover the coverage by clicking on the image below: 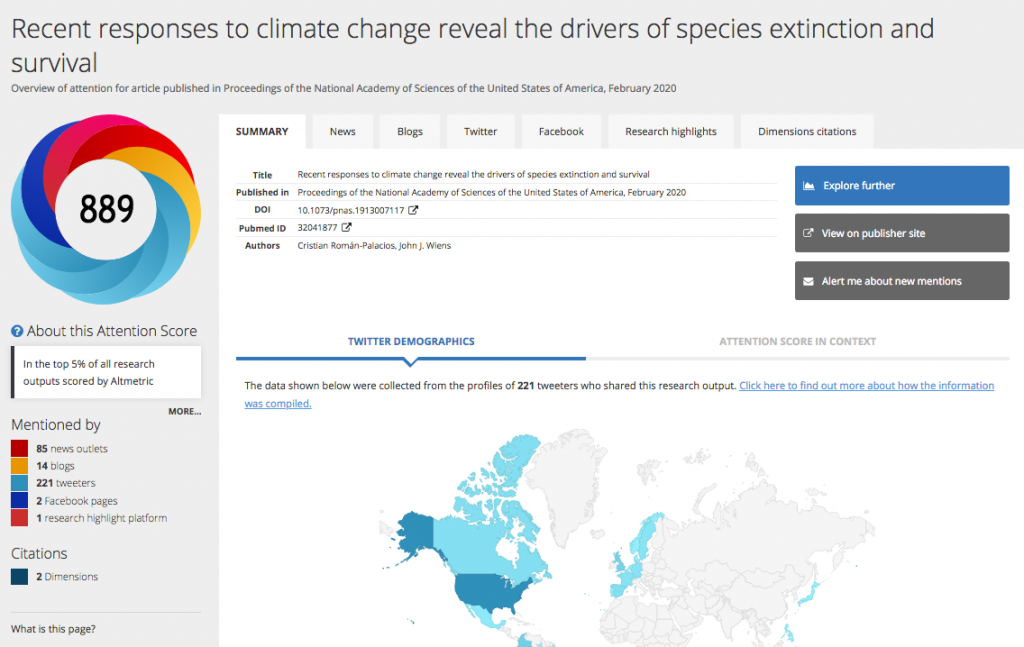 “It’s reached a lot of people which I think is great for us for us,” Prof. Wiens said, “because it is on everyone to make sure that the worst scenarios don’t come to pass.”

“I think it’s the headline. We focused on this one in three number, that’s a very easy-to-consume headline, and I think that drove a lot of the coverage. It’s actually a much simpler message than the title of our paper, which is interesting to scientists, but maybe not to the general public. It’s nice that this was picked up by a lot of news outlets, and it seems like having that striking headline was key.”