On the 19th April Altmetric, in partnership with MedComms Networking, hosted a workshop for representatives from the medcomms and pharmaceutical industry. The day-long event included guest speakers, workshops and some great discussion around the use of altmetrics for tracking engagement for industry-sponsored publications.

The day began with an introduction from Ben McLeish, Product Sales Manager at Altmetric, and Peter Llewelyn, Medcomms Networking. As part of the introduction to altmetrics and the day ahead Peter and Ben introduced the Meetoo mobile app that was used during the day for audience participation with polls, asking the speakers questions and making comments throughout the talks.

Results from initial polls, asking questions about the demographics of the audience, revealed that more than half attendees are medcomms agencies and mostly from the UK and would best describe their current role as ‘Medical writing’. 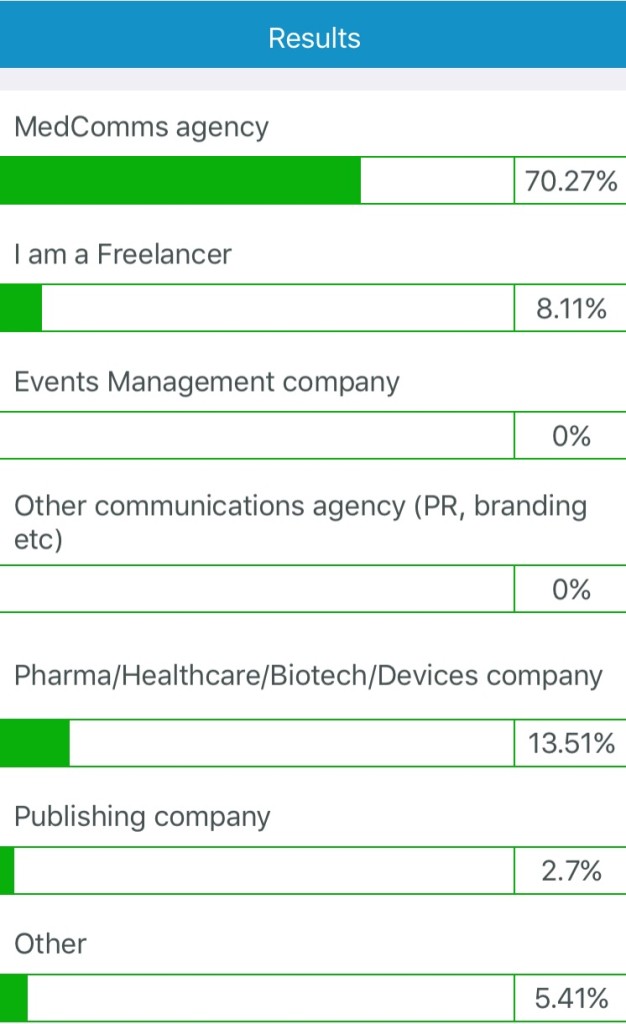 The first session of the day was kicked off by the current President of the Pharma Documentation Ring (PDR), Andrew Clark. The PDR are a think tank involved in research and innovation as well as product development, with members who represent leading international R&D-based pharmaceutical corporations.

Andrew gave an insightful talk on how PDR currently use altmetric data for gathering competitive intelligence. Using Altmetric they are able to track websites and social media for actionable insights used by a number of departments at the PDR. 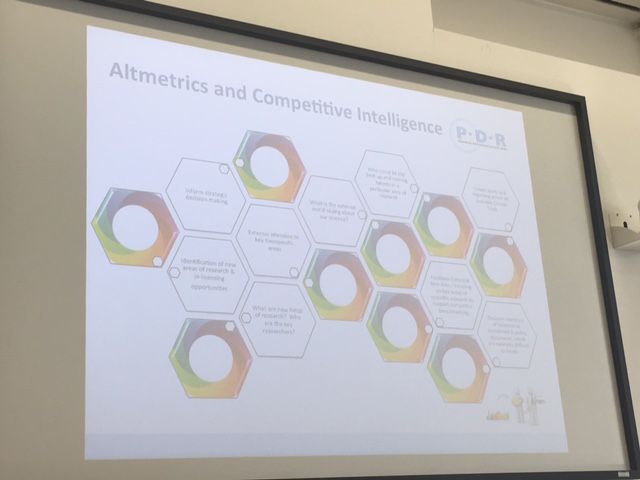 Andrew went on to speak about how altmetrics applies structure to sources like social media that make it easier for him to keep track a large number of online mentions across sources of information that appear daily.

Andrew also spoke about the application of Altmetrics to pharmaceutical companies and how they can be used to find new areas of research, find institutions to work with and discuss collaborative work as well as headhunt by keeping up to date on the latest clinical trials. As part of this he noted that it was particularly useful that Altmetric tools provide historical timelines of online mentions, and not just recent ones.

Paul Lane is the Lead for Social Media and Web-based Information at Envision Pharma Group. His session focussed on the how data is now distributed on the digital web rather than print. 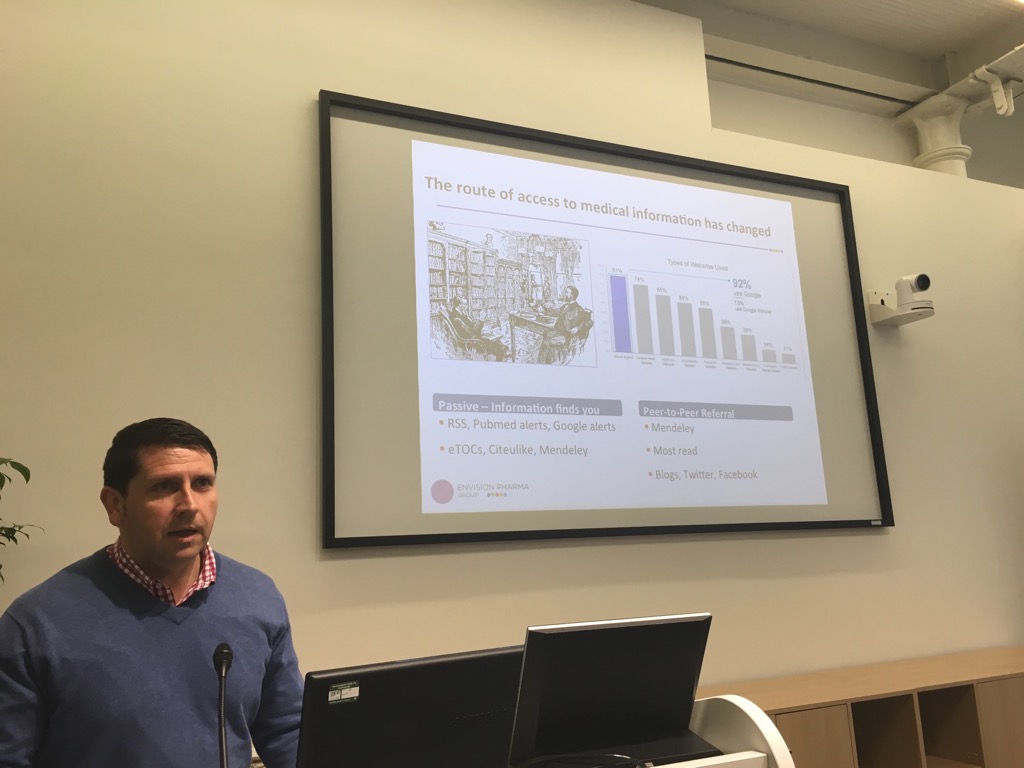 Paul started with an interesting introduction to how the route to access data has changed, reinforcing that the most common way people now find information is through search engines and alerts.

He went on to discuss how it’s not just the routes to discovery that have changed, the consumption methods have changed too. Researchers can’t keep up with the amount of literature that’s published, so instead rely on webpage summaries, video abstracts, podcasts and tools such as Dryad and doc2doc to unearth the content they need.

Secondary summaries of articles, such as those featured on medscape or where an item is referenced in Wikipedia, all serve to add more distance between the reader and the actual article – and therefore the reliability of what’s being said lessens.

Paul then went on to speak about how social media is very relevant for dissemination of research. This is particularly true for journals that publish content from conferences, which are able to speak to people who haven’t attended and share information about their publications via social media. He stressed the importance of social media when receiving feedback on a publication and that mentions or comments online should be treated with the same importance as a letter to the editor.

Paul concluded by summarising the importance of altmetrics, and that tracking this data provides you with an aggregated and lifelong view of the cumulative reach of an article.

Altmetrics as indicators of broader impacts of research

The last of our guest speakers was Catherine Skobe, Director of Publications Management at Pfizer. Catherine has been working with altmetrics for the past year with a mission to explore alternative metrics for Pfizer articles published over the past 2 years. The initial findings from her project were initially presented via a poster at the recent ISMPP conference. 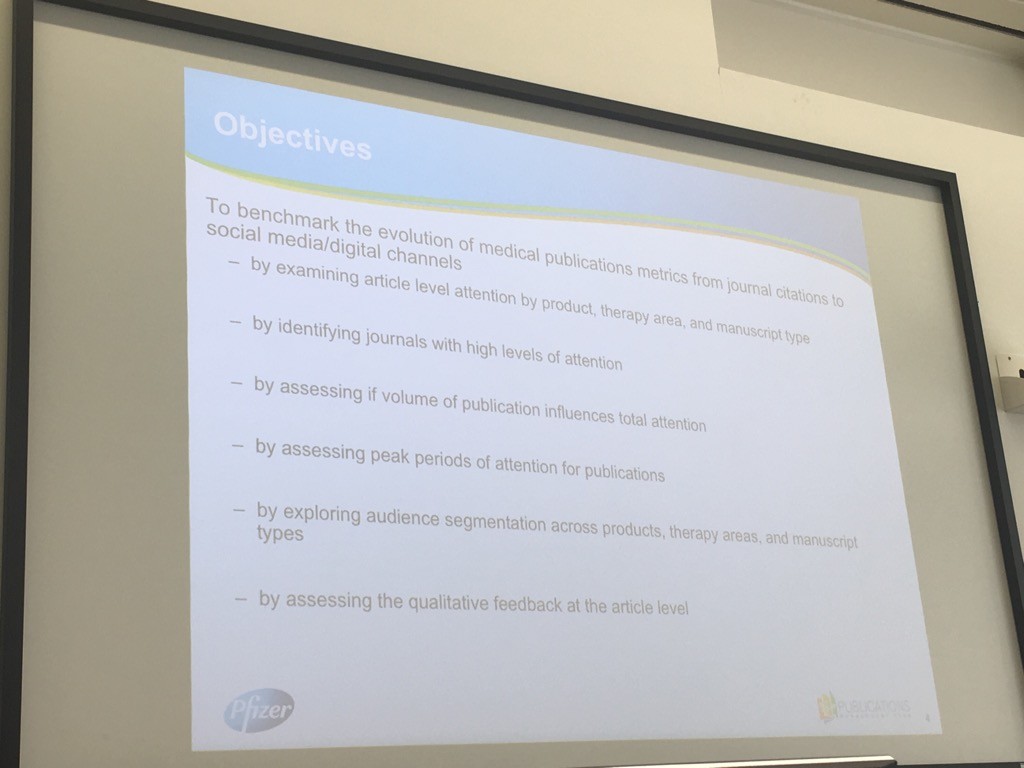 To do this analysis Catherine and her team used the Altmetric Explorer for Institutions, which enabled them to benchmark altmetrics for a large group of medical publications and get a holistic view their reach. By using the Explorer they were able to filter their searches to look at article level metrics broken into specific areas such as product, therapeutic area and type of attention.

The results they concluded from their search were insightful and actionable. They were able to find reliable results for their publications such as the subject areas which received the most attention and whether online or print publication affected the attention they received. They were also able to breakdown attention between review, primary and secondary articles to determine how much and what type of engagement each of those were receiving, producing insights which are of interest for future publication strategy.

Last to speak were Jean Liu, Product Development Manager at Altmetric, and Matt Macleod, Altmetric’s Lead UI Developer. Jean began with a recap of Altmetric’s mission: to track and analyse activity around scholarly research publications. She then went on to give an overview of how the development team at Altmetric are structured, and our agile development process. 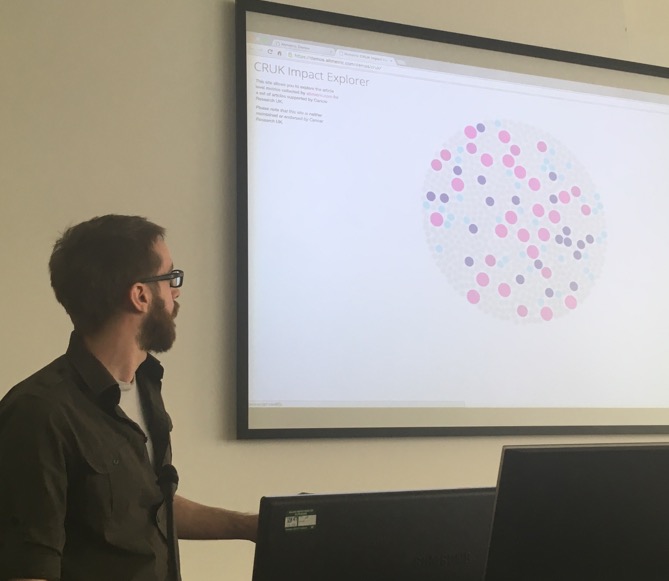 Some of the highlights that Jean spoke about from our product development were the addition of new attention sources planned for the upcoming year, and the long-running collaboration that we have with the Cochrane group.

Matt then presented a series of visualisations that showcased the types of data we track, providing new insights on trends, including a real time map of the geographical spread of the Tweets Altmetric track.

The day concluded with a workshop where the audience were split into groups and explore altmetric data, using the Altmetric Explorer, for two different articles and determine which was the more successful article.

Many of the groups came to the same conclusions with some correctly questioning what was meant by success and whether the papers were reaching the audience they wanted. Some found that the older paper was more successful as it had more impact with healthcare professionals but the newer one had more success on social mentions. Some found that there was an effect on the score as the sources we have tracked have increased over time so score in context on the Explorer is useful to determine how the article compares with other papers published in the same time period.

At the end of the day a final poll was taken to find out whether the audience was clear on what altmetrics are their application to the work they do.  The results concluded that the day was a success: 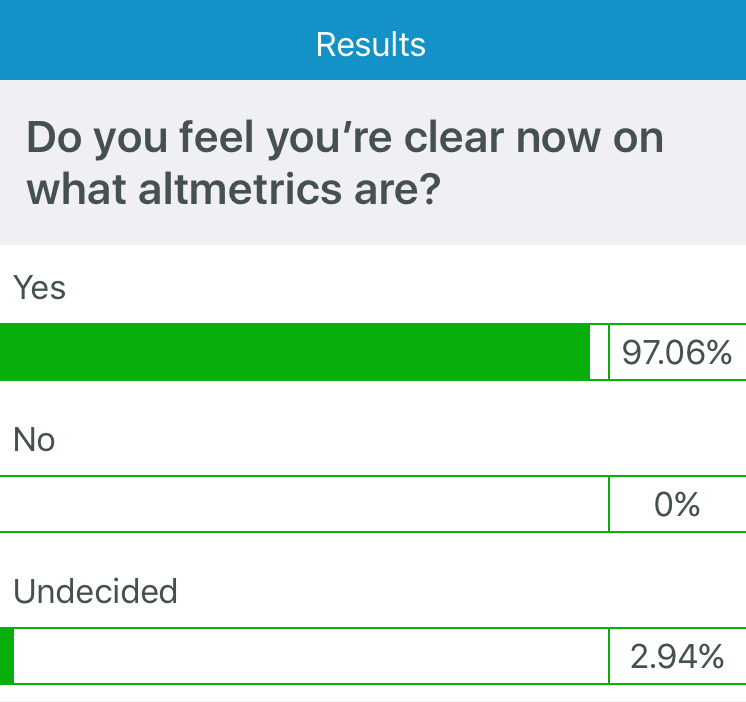 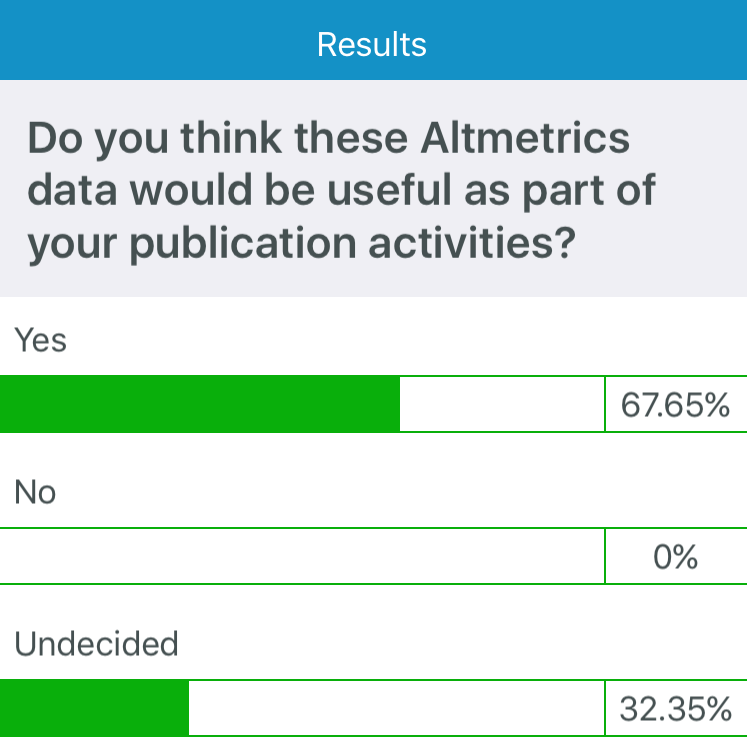