Coronavirus (or COVID-19 as it is now formally known) first emerged in central China in December 2019. Since then, news of its spread has dominated media headlines around the world. As of 30 March 2020, 723,740 people are estimated to have contracted the virus, and for more than 34,000 people it has proved fatal.

The research world has been quick to react, with reports of teams around the globe in a race to develop vaccines, and scholarly publishers opening up their related content so it is freely accessible for anyone to read.

By exploring the Altmetric data around COVID-19, we can start to understand how the scholarly research on this new disease is influencing our understanding of what the emergence of this new threat means for our society, and see how that work is already influencing policy around the world.

A search in the Dimensions database, which includes preprints and datasets alongside more traditional research outputs such as journal articles, for COVID-19 from 2020 showcases how much information is already out there; 3,923 journal publications, 608 preprints, and 114 datasets, all in the short time since the first confirmed case.

Several of the papers published this year are already extensively cited – “Clinical features of patients infected with 2019 novel coronavirus in Wuhan, China”, published in The Lancet, has received over 598 references to date, and a second early study “A Novel Coronavirus from Patients with Pneumonia in China, 2019” in NEJM has been cited 428 times since it was published.

A closer look at the citing research categories of that second paper in particular highlights the cross-disciplinary nature of the research that is now needed to tackle the spread of the virus, with one paper in particular discussing “The Role of Augmented Intelligence (AI) in Detecting and Preventing the Spread of Novel Coronavirus“. 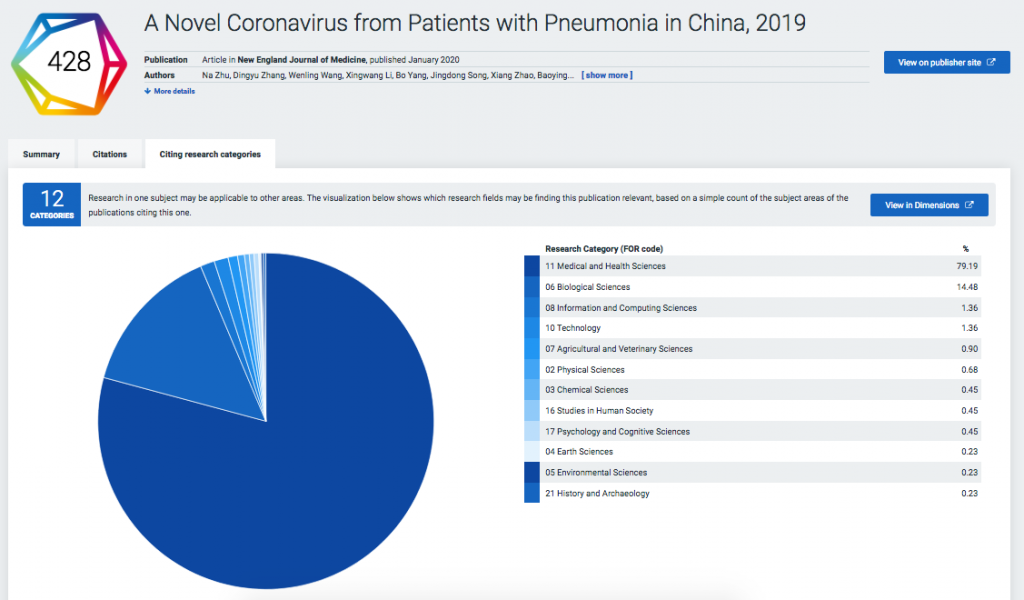 Looking in the Altmetric Explorer, we can quickly and easily see how the conversation around this topic grew rapidly as news of the virus spread:

Interestingly (although perhaps unsurprisingly), the publications that feature most in the discussions we see reflected in the Explorer differ from those which are most cited by other scholars – with the exception of the top-cited and mentioned Lancet paper, and another that looks at early transitioned dynamics: 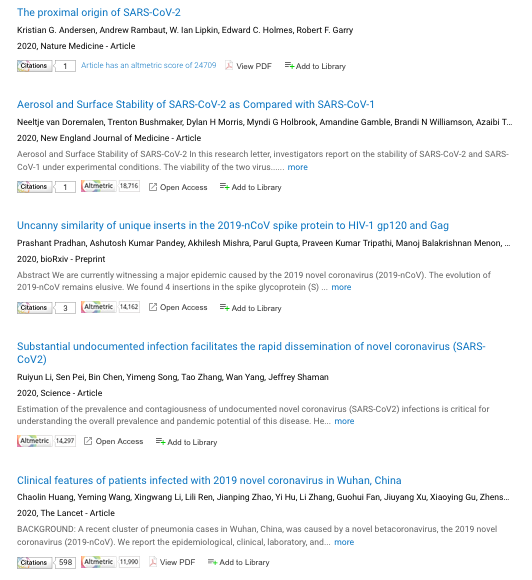 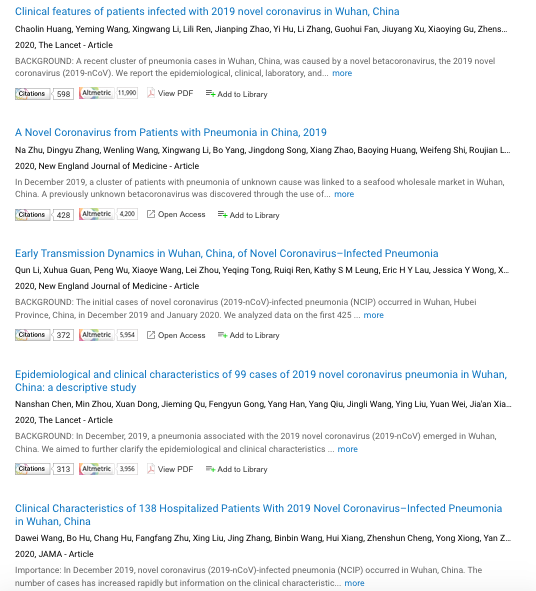 Why might this be? The date of publication has a big part to play – articles that have had longer to be cited are most likely to be found at the top of the Dimensions list.

You’ll notice, though, that in the first list above the 3rd- highest Altmetric-scoring publication is a pre-print, reflecting the huge influence that these forms of publications can have, long before the resulting journal publication is formally cited. This particular preprint has scored so highly because it was actually at the center of a controversy; it had serious errors and was retracted within a day. Unfortunately, although the researchers did the right thing in responding quickly, it was linked to a conspiracy theory that coronavirus was a man-made weapon, and mentions quickly grew. In the Altmetric Explorer you can see the spike in mentions between the February 1 paper release, and its retraction on February 3.

What is also interesting in the Altmetric data is that it’s now papers that have been published in internationally-recognised leading journals that are topping the list in terms of attention – suggesting that in times of crises it is expert, peer-reviewed science that even the general public look to and share with their social circles.

Altmetric tracks a huge range of sources; social media (including Twitter, Facebook and Reddit), the mainstream media (from over 5,000 outlets around the World), Wikipedia, Youtube and blogs – and also over 85 policy outlets, making it possible to see where academic work is having a influence on policies being issued by Government, NGOs and think tanks.

From the Altmetric data, we can see that the Coronavirus research in our search has already had a huge amount of engagement – over 28,000 mentions in the mainstream media, more than 1 million shares on Twitter, 399 references from Wikipedia, and over 150 videos that have directly linked to research publications.

All of this plays a huge part in shaping the public understanding of the virus, and new ‘influencers’, who are sharing this work the most or have the ability to reach the biggest audiences, are quickly emerging.

@OutbreakScience, self-described as ‘a nonprofit to advance the science of outbreak response’ has been the most active sharer of this research in our search – but the account is currently followed by just 808 others. Arguably more influential, the recently created twitter account @PandemicCovid20, the fourth most active sharer of this research – has already amassed over 40,000 followers.

Organizational accounts of the WHO, WIRED and Nature News, which between them have over 18 million followers, have also been active participants in making this research more visible to a much wider audience. Individuals such as @OlaAlfares and @takapon_jp, each with millions of followers, have retweeted posts from others that highlight new discoveries and unique aspects of COVID-19 that are likely to be of interest to the audience they engage with via Twitter: 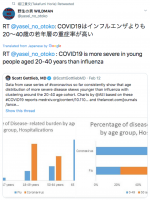 The global spread of these conversations is reflected particularly strongly in the demographic data we are able to gather from news articles that mention relevant research:

Looking in more detail at the datasets in our search, it’s interesting to see that scientists themselves have taken to social media to both make the data easily accessible and to quickly gather feedback:

Governments around the world have been quick to recognise the potentially devastating impacts of COVID-19, and many have worked quickly to develop new policies and procedures to ensure that its spread is contained. The research in our search has been referenced in 59 policy documents already, refleting the speed at which governments and organizations around the world are incorporating the lastest sceintific evidence into their response to the outbreak.

Early on, 2 policy documents from the CDC (here and here), one from the Congressional Research Service, and one set of UK Parliament Briefing notes cited original research – looking to experts to guide their approach. These documents focus on the transmission and national response to the virus, and play a vital role in shaping the decisions that will be made in handling the outbreak.

Beyond social media sharing and more formal policy documents, bloggers and Wikipedia Editors are translating scholarly work into articles that are more accessible to a general audience. Opinion pieces that question government-issued updates, provide a critique of governments’ handling of the situation and raise awareness of new clinical trials and other developments to help combat further spread all feature amongst the topics of these posts.

Blogs highlight, in many cases, what news and public policy do not yet address: worst case scenarios, calls for intergovernmental cooperation, and an awareness of how the media itself may be fuelling panic.

Preprints make up a sizeable proportion of the currently available research publications on COVID-19, and many of them have already been referenced from many Wikipedia articles – ably demonstrating how the advent of the preprint server is changing where and at which point in the publication (and peer review) process and wide public audience is informed by academic research.

Looking to the future

How and how fast COVID-19 continues to spread is yet to be seen – and it is likely that the public discourse around the research in the space will change over time. With a rush to publish and find a cure, at least some of the papers much referenced and shared today will likely be retracted under further scrutiny – raising the interesting question of whether, in a scenario like this, research is better done fast or done better.

We’ll continue to monitor these conversations via the Altmetric Explorer – and fully expect to see at least one of two of these papers pop up in our Top 100 list at the end of the year.

If you’re keen to follow along or do some investigation of your own, get in touch with our team to find out about Explorer access today.

Thank you so much, this is marvelous and absolutely useful lesson for me. In this article l have found all vocabulary necessary for speak about the coronavirus.We acknowledge it, it is a pandemic, just governments are proceeding to report cases rather than decisively searching for approaches to outperform the spread of this deadly infection, resident should keep on being liable for their own shelter and should report the cases promptly and be at the vanguard to spread the message to make mindfulness

Hi, thanks for sharing wonderful information. I hope there are several apps that gives you a quick insight about the current stats