In this first of a two-part guest blog post, Steve Dudley, Chief Operations Officer of the British Ornithologists Union (BOU) summarises the results from his recently published article in ISMTE looking at the positive effects of promoting research on Twitter.

The second part of this blog post will be published tomorrow (November 15th).

Adapted from an article first published in ISMTE’s EON(March 2018, Issue 11)

When you publish your research you look for impact. Impact comes in different forms, but most publishing academics strive for their work to be cited providing them with some level of merit from their peers within their research community.

Since 2014 a new measure of impact has been around – altmetrics – which measures not the scientific quality of the research article, but an article’s online attention by way of tracking mentions in news media, on blogs, across (some) social media platforms and a variety of other online sources.

In some sectors, scientists have been very slow adopters of social media. That isn’t true for ecology, and in particular, ornithology (avian science), and, rather appropriately, ornithologists have taken to Twitter (tweet-tweet) like ducks to water to promote their research. So it isn’t particularly surprising that some of the more meaningful early studies connecting the online attention of research articles to citations have come from these areas.

Peoples et al(2016) found that Twitter can predict the citation rate of ecology articles, and our own recent study (Finch et al 2017) used Altmetric data to show that not only did online mentions predict future citations in ornithology, but that Twitter contributed 75% of all the altmetrics of ornithology articles.

So the question I am frequently asked by non-ornithologists is, how did the (to many, obscure) field of ornithology achieve this?

Ornithology in the social age

Ornithology has an established and mature community on social media thanks largely to several key, early adopting, stakeholders including my own society, the British Ornithologists’ Union (BOU). We took to Twitter and Facebook in 2011 to promote not only articles from our own journal (Ibis), but all ornithology articles. Our rise on these two platforms has been steady and on Twitter we now have over 13,500 followers (by far the largest journal/society account in ornithology) and we tweet around 20 times a day, mostly about new avian research articles. Many other ornithology journals and societies are now on Twitter, but the BOU is the only account that genuinely promotes all ornithology, tweeting and posting about any articles from any journal (even our fiercest rivals) for as a community society we see way beyond our own society’s needs. We are there to serve our community as broadly as we can.

Twitter has fast become the platform of choice for ornithologists. Most of the content remains science-focused, with relatively little chat. Twitter also uses a hashtag system: hashtags collate all mentions of a particular tag which can be saved by the user for quick access to all tweets on that tagged topic. These tags have also led to the establishment of community tags providing groups with distinctive identities. In 2012 the BOU promoted the #ornithology hashtag to promote all aspects of ornithological research on Twitter. The tag quickly became established and is a key driver for our community. From tracking the use and reach of the tag we know it has grown from around 150,000 impressions a day in 2014, to c.1.5 million impressions a day at the end of 2017.

The third factor contributing to ornithology’s perfect Twitter storm is education. From the onset, the BOU adopted the role of community educator on all things social media, and latterly altmetrics. We have a masterclass blog series which informs about Twitter best practices, the benefits of promoting your own research, which platforms to use, and the role of altmetrics and how researchers can track the attention of their own research articles.

So ornithology researchers taking up social media in recent years have found a ready-made community to hook up with, and audience to tap in to.

Understanding that in ornithology we have a well-established and mature community on Twitter, we wanted to explore whether Twitter activity around published ornithological research was measurable, and whether or not online activity translated into citations of the research articles being promoted.

We looked at the Altmetric Attention Score (AAS) of over 6,000 research articles published in 10 ornithology journals between 2012 and 2016. Even over this relatively short period the AAS of articles have increased, which might be expected given the increased use of social media during the same five-year period. An important finding was that Twitter was by far the most important contributor (75%) to the overall AAS of ornithology articles followed by news media (13%), blogging (8%) and Facebook (2%) (Fig. 1). 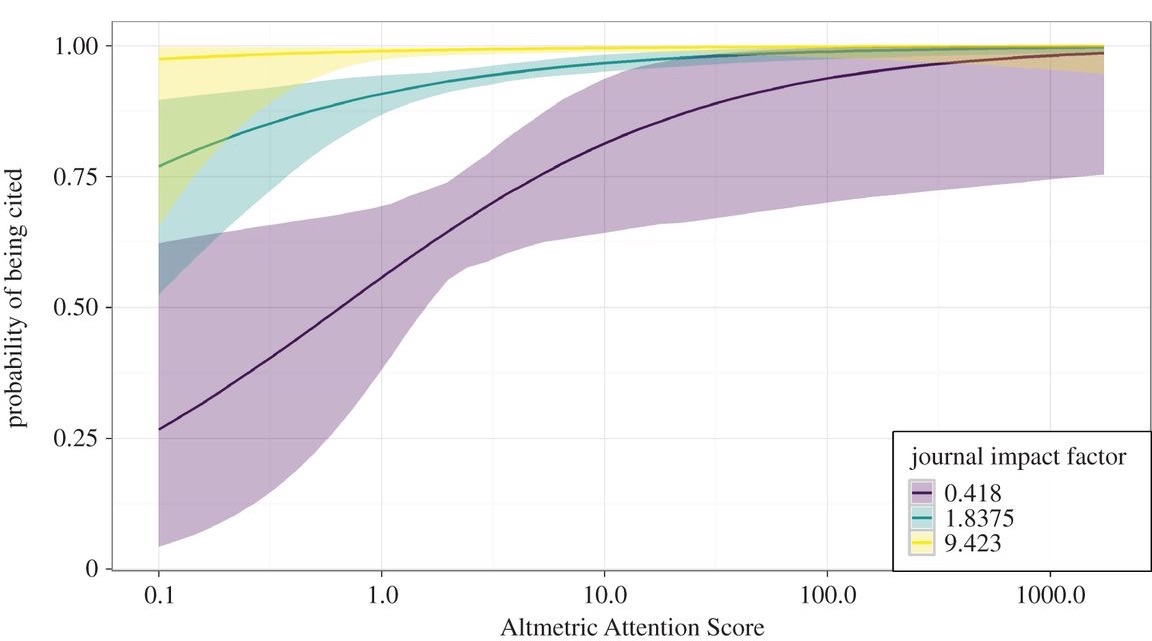 We can’t establish whether articles which received more online mentions were cited more due to this increased attention, or whether more ‘citable’ articles get more online mentions because of their higher quality/relevance. However, either way, it appears that AAS can provide a more immediate measure of articles future scholarly impact in ornithology.

In part 2 I’ll discuss how both individuals and society publishers can better promote their own research articles.

About the author: Steve has spent much of his 30-year career communicating science at different levels. He has run the British Ornithologists’ Union (BOU) for over 20 years, and is responsible for delivering most of the society’s activities including all social media and communications. His recent focus has been on peer-to-peer communication, educating his research community about the benefits of using media and in particular about altmetrics.