On 24th June, I attended the 44th annual LIBER conference with our head of marketing Cat Chimes and our Training and Implementations Manager Natalia Madjarevic. The theme of this year’s conference was Open Access. In the impressive halls of Senate House Library at the University of London, we rubbed shoulders with librarians and other institutional representatives and discussed that most complex of questions: how can we combine technology, legislature and policy in a way that successfully and ethically facilitates the global sharing of knowledge?

The morning session I attended was organised and presented by SPARC Europe, an Open Access advocacy group who liaise with European universities and government bodies to try and further OA initiatives. Firstly, Alma Swan gave an update on SPARC’s efforts to convince the European government to amend copyright laws, so that researchers can perform data and text mining queries with large sets of articles, if their institution is subscribed to the journal (UK copyright law incorporated this change as of last year).

Alma also introduced the ROARMAP, or (Registry of Open Access Repository Policies and Mandates), an online database that houses over 700 repository policy documents for a range of institutions and funders. SPARC looked at six policy conditions across the universities (such as whether that institution has made it mandatory for researchers to deposit their publications in the repository) and performed a regression analysis to try and ascertain the extent to which these policies affected researcher behaviours. They found a positive correlation between institutions that insisted (rather than simply recommended) on depositing, and the deposit rate. In conclusion, Alma suggested that researchers should make a habit of depositing their publications in Open Access spaces, not simply to comply with university regulations, but to make their research more visible to tenure and funding committees, thereby potentially enhancing their career prospects. This approach has interesting implications from an altmetrics perspective, as the more people store and share research in easily accessible online spaces, the more activity and attention data can be collated around those outputs.

The session also included an update from David Ball on Foster, an Open Science training initiative, and from Joseph McArthur, co-founder of the Open Access button. Overall, the workshop provided a comprehensive overview of the Open Access issues currently facing institutions. 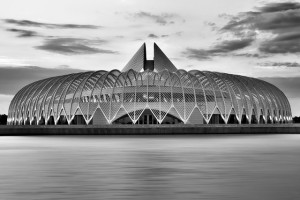 issues in research production and dissemination, and how these issues affect the librarian as a “visionary in the communication of knowledge”. He argued that technological developments have allowed us to make huge steps in knowledge dissemination, but that there is pressure to maintain best practises and really think about how to communicate research to different audiences, as we continue to move from the printed page to the screen. He also advocated a transition from the single research paper as an isolated and closed declaration of discovery, arguing that research outputs should be continually updated to include more recent data that corroborates (or undermines) the original findings. One of the slides that really summed up his entire presentation included an image of the new library at Florida Polytechnic University, which doesn’t contain any paper books; only digitised records.

In one of the last sessions of the day, our very own Natalia Madjarevic gave a presentation on how Altmetric data can help libraries improve their research services. Scott Taylor, (research services librarian at the University of Manchester), talked about how his institution had used

the data to identify “impact stories” around their research – helping the impact officers uncover previously unknown information about how the scholarly outputs of their faculty had been shared, discussed and put to use beyond academia. Following this, Bertil F Dorch presented the findings of a project on whether sharing astrophysics datasets online can increase citation impact. It was really interesting to get an altmetrics expert, a librarian and researcher in the same room to talk about putting research online, and how that practice relates to different models of research evaluation.

Overall, day two of the annual LIBER conference provided many interesting insights. Although Altmetric only attended day two of a five day conference, we still really got a sense of what librarians, policy makers and OA advocates are thinking and talking about in 2015. One of the things that struck me was that although Open Access is now an established way of offering data and research, the OA movement still presents challenges and opportunities in equal measure. Over the next few years, it will be interesting to see the outcomes of efforts from OA advocates such as SPARC, and to monitor changes in academic publishing and researcher practices, in light of Mark Walport’s comments.

Thanks for reading, and feel free to leave feedback as always!

Thoughts on LIBER 2015: On 24th June, I attended the 44th annual LIBER conference with our head of ... http://t.co/QOXMOBuzyU #altmetric

Thoughts on #LIBER2015 via @altmetric http://t.co/G9TXxH5fOg