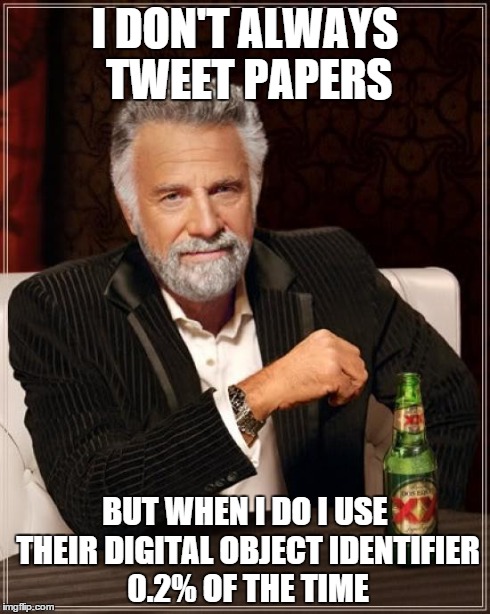 I agree with lots on the excellent ImpactStory blog but I really don’t agree with this post arguing that Nature’s new SciShare experiment is bad for altmetrics. It really isn’t. I figured it was worth a post here to explain my thinking.

In my view it’s mildly inconvenient for altmetrics vendors. 🙂 But you can’t really spin it as “bad” in this context beyond that and given that there are good aspects too I think the title of the ImpactStory post is overkill.

I may be biased. We share an office in London with Nature Publishing Group and Digital Science (their sister company) who invested in Altmetric. I also used to work for NPG and have a lot of love for them. I have a lot of respect for Readcube too, who’ve done some awesome things on the technical side. So bear that in mind.

Anyway, I actually agree to an extent with what are maybe the two main points from Stacy and Jason’s post and those are the ones I’ll cover in a bit more detail later.

Here for reference is the list of recommendations that they make:

First off I think the lack of pageviews API on nature.com and the look of the altmetrics widget on the ReadCube viewer sidebar are sort of irrelevant – sure, those points are definitely worth making, but these aren’t SciShare things, or even issues unique to Nature.

That same widget has been in the ReadCube HTML viewer (which hundreds of thousands of Google search users have seen on a regular basis) for years and to be fair you’ve got to admit that almost nobody – except for PLoS and eLife AFAIK – have an open pageviews API.

Leaving aside how useful or not pageviews actually are for most altmetrics use cases (I actually have problems with them, as they’re neither transparent nor particularly easy to extract meaning from) I’d love for there to be more APIs available so tool makers had options… but yeah, not really anything to do with SciShare per se.

The final recommendation contains the bits I agree with and it’s worth diving into.

I’d definitely agree that it’d be useful for the link to include an identifier. It saves us work. That said, lots of publishers (the majority, even) have links without DOIs in them and we have to work round it. It’s not a big deal.

Some hard numbers from just us to back this up – I imagine other providers see similar ratios: there are 2,714,864 articles mentioned at least once in the Altmetric database.

Of them only 813,024 (~ 30%) had a DOI in at least one of the links used by people in a mention (this number will also include people who used dx.doi.org links rather than links to the publisher’s platform).

The URLs may break

Exact same deal here: I agree, it’d be nice to encourage the use of a more ‘permanent’ link, and it’d definitely be good to hear somebody clarify what’ll happen to the links after the experiment is over. I’m surprised somebody hasn’t already (update: I should have checked Twitter first, Tom Scott at NPG has said they will be persistent).

But… for whatever reason only a very small fraction of users on social media use dx.doi.org links.

You could say that SciShare doesn’t help these problems, and you’d be right. It’s really not going to make them noticeably worse though. I think altmetrics has bigger problems with links to content.

Non-SciShare problem A: News outlets not linking to content at all

I didn’t have any inside track on SciShare and we weren’t involved in any of the planning, but I did hear about it a little early when we got asked to help identify news and blog sources for whitelisting purposes (I don’t know if the data we put together is what eventually got used, or if some extra editing was involved).

My first thought was: if it means a single news source starts actually linking to content instead of just mentioning the journal in passing then it’ll probably be worthwhile.

The biggest problem with news outlets and altmetrics is that even when they’re covering a specific article they usually don’t link to it (happily there are a growing number of exceptions, but they’re still just that, exceptions). Publishers usually blame journalists, and journalists blame publishers or the fact that they’re writing for print and online is an afterthought.

We end up having to rely on text mining to track mentions in news sources which works but means we have to balance precision and recall. Anything that helps supplement this with links and make mainstream media data more reliable sounds good to me.

This topic came up a lot at the PLoS almetrics workshop last week.

I’d argue that the single biggest problem for altmetrics vendors when it comes to collecting data is actually insufficient machine readable metadata – and especially identifiers – on digital objects containing or representing scholarly outputs, especially in PDFs.

Incidentally NPG has actually always been a leader here. If you curl a SciShare URL you’ll notice machine readable metadata including the DOI come back.

Unfortunately it’s not a particularly interesting issue unless you like scholarly metadata. It doesn’t have an exciting open access angle and there’s unfortunately not a hashtag to use to campaign for it, but there probably should be.

8 Responses to “What Nature's SciShare experiment really means for altmetrics”

These are some great points, Euan! Thanks for sharing your point of view.

I absolutely agree that much of what's been pointed out in our post isn't unique to SciShare (and I begrudgingly agree that my blogpost title was maybe overkill :)). But NPG is well-equipped to address some of these gaps in data availability, so it's been disappointing to see them overlooked.

I'm hopeful that NPG will put their resources into improving SciShare in some of the ways we've suggested, so it doesn't contribute to the issues we're already facing as both altmetrics providers and as researchers who want the ability to reuse and share our own scholarship in the ways we see fit.

@derivadow Euan just wrote a great response to our original post, have you seen it yet? http://t.co/y9kYWaVPx0

Glad @stew also thinks the Beggar URLs are stupid http://t.co/dsRjwpcsIR it's publisher-centric design for sure.