6 September 2016, London, UK — Altmetric today announced it has begun to track data from the Open Syllabus Project (OSP), which details where individual books are included in the syllabi of over 4,000 academic institutions around the world. For the first time, these unique data are combined with other altmetric indicators to provide quantitative insights that can help authors and publishers monitor the uptake and influence of their books. 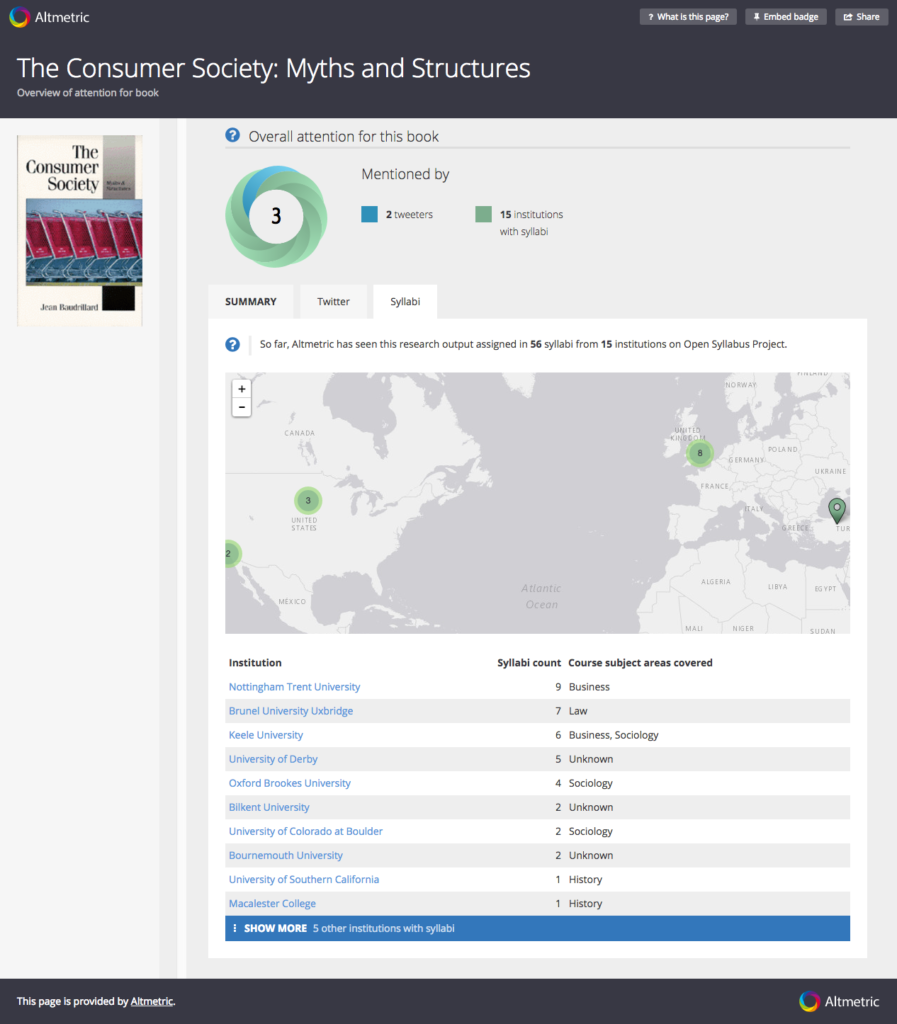 Speaking about the integration, the OSP’s Product Director Joe Karaganis commented, “One of our main aims in launching the Open Syllabus tool was to help authors, scholars and libraries get a better understanding of where books were having an influence in the classroom. We’re really pleased to see Altmetric integrating our data into their platform, adding another level of visibility to our efforts.”

Jean Liu, Product Development Manager at Altmetric adds, “In the last year, we have developed exciting new ways to showcase the online attention surrounding books and chapters. We hope that the inclusion of Open Syllabus Project syllabi data will give our users, particularly editors and authors, valuable insights into the use of books in an educational context.”

Institutions with syllabi data are visualised in a map on a new Syllabi tab on the Altmetric details pages, which provide a full overview of all of the online attention surrounding books and other research outputs. Also shown is the number of syllabi from each institution that include the individual title, and a summary of the disciplines that include the title in their syllabi.

Users can click on the name of an institution to be taken to the associated OSP record, which lists all books referenced by that institution in their course syllabi.

About Altmetric
Altmetric was founded in 2011. Its mission is to track and analyze the online activity around scholarly literature. Altmetric is the trusted altmetrics provider for some of the world’s biggest publishers, funders and institutions, delivering real-time attention data in an accessible and reliable format. Altmetric is supported by Digital Science, which is operated by the global media company Holtzbrinck Publishing Group. Follow us on Twitter @altmetric.

About Open Syllabus Project
The Open Syllabus Project is a curricular research effort based at Columbia University.  By collecting and datamining very large numbers of syllabi, the OSP brings new perspectives to bear on fields, teaching, and publishing. Visit http://opensyllabusproject.org/ or follow us on Twitter @opensyllabus to learn more.