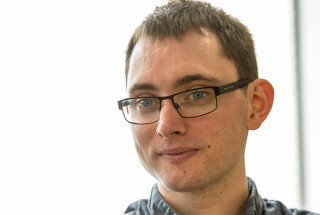 Shane likes to surround himself with mystery, and try to think of inventive ways to inspire stories in the lives of others; maybe it’s following the trail of Jack the Ripper or away for a murder mystery weekend.

When he’s not thinking of ways to hide morbid clues, he’s a Baker (or “developer”, one might say) for Altmetric, helping out with setting up Institutional users and ensuring our data is accessible to anyone that needs it.

I’m responsible for a bunch of things regarding the development of our products and helping make sure the team is running the best it can be. As a technical manager, I split my time between the product team (where I work on new features for the Altmetric Explorer and details pages) and managing a few members of the team (which means ensuring that they get the right support to keep their career going in the direction they want)

In an average day I have a very similar job to the rest of the development team; we have our daily standup to make sure we’re all on the same page and we pick up tickets and work on them solo, in duos, and occasionally as a mob. Most days we try to eat lunch together too, at least those of us in the London office.

The best part of my job is having an environment where I’m both respected and given the opportunity to learn. Even five years into the company there are still lessons to be learned from each member of the team.

The most interesting thing I’ve learnt since starting at Altmetric is that there’s a lot of data out there and the majority of it is messy. I bet that if there was a worldwide effort to organize all the data that is stuffed in malformed CSVs, hidden away behind undocumented APIs, and undecipherable in unformatted text dumps then scientific discovery would jump ahead in leaps and bounds. So many of the world’s tools are dedicated to taking crummy data and making it useful. That’s not just data that Altmetric ingests, but everywhere in life!

The thing I’m most looking forward to next is learning a tonne of new skills that come with my recent promotion to Technical Manager. It’s a whole different type of work that’s got me thinking in ways I’ve not had to do whilst only writing code.