The following post was written by Amy Rees, Customer and Sales Support Specialist at Altmetric.

Public outreach is becoming increasingly important for researchers going up for tenure. But how can you document the effects your engagement efforts are having?

Altmetrics have been suggested in the past, but is it even possible to shoehorn that kind of newfangled data into a traditional promotion and tenure dossier format?

Though not yet well-known, we’re learning that using altmetrics in one’s promotion and tenure dossier is a valuable way to provide hard evidence that online engagement strategies are working to connect researchers with the general public.

In this post, we share what we’ve learned to date–including expert recommendations borrowed from bibliometrics, examples from researchers who have used altmetrics in their own tenure dossier successfully, and suggestions for how you can do the same.

Where can altmetrics fit into the average tenure dossier?

While promotion and tenure requirements vary by university and often even by department, the following items are likely to be required in any P&T dossier, and altmetrics can be used easily therein.

An up-to-date Curriculum Vita is usually included in P&T dossiers. One way to provide a snapshot of attention for individual articles, datasets, and other outputs is to add a static version of the Altmetric “donut” badge next to each line item in your CV (which we explain how to do below). By using a simple, static version of these visualisations and metrics, you are ensuring that the altmetrics visualisations work across different formats and don’t require the reviewer to follow a hyperlink.

Here’s how to add the Altmetric donut badge to your CV:

Another way to include altmetrics in a CV is to simply copy and paste the data into the dossier. This offers the advantage of integrating the data into the existing look and feel of the CV, and also retaining context for the metrics (an important concept that we explain in more detail below). For example, Dr. Trevor Branch, a researcher from the University of Washington, copied and pasted altmetrics data into his CV to highlight the reach of his publications in the media.

Personal Statement (aka the Tenure Narrative)

A promotion and tenure dossier often contains a personal statement or tenure narrative, which allows you to outline your important career, research and academic contributions, and your service to the university. The Personal Statement provides an opportunity to dig down into some of the qualitative altmetrics data for research. For example, facts like as “My research was cited in a World Bank report on Malaria” can be discovered using altmetrics tools and included in this dossier section.

Scholarship Evaluation is often a required section in promotion and tenure dossiers; essentially, this is the presentation and evaluation of your most important work. This section offers a great opportunity to draw attention to the most compelling altmetrics data for your work–specifically, the attention data that you believe characterises you as a leader in your field. This is also another good place to include qualitative evidence, rather than metrics. For example, “My research has been consistently cited in mainstream media with broad international readership, in news outlets such as the BBC, and has had positive Publons reviews” is more compelling than “My current Altmetric Attention Scores are 241, 118, and 17”.

Promotion and tenure dossiers tend to contain information about grants, both funded and unfunded. In the grants section, you can use altmetrics to show the attention associated with materials that were published following the grant. Crucially, if software or any other non-traditional output was generated during the funded work, you can also highlight any altmetrics that those outputs generate.

Outreach and Engagement is still a relatively rare requirement for promotion & tenure, but the list of universities who do require it is quickly growing. Dr. Branch, whose use of altmetrics we saw above, works at an institution with such a requirement.

Universities such as Virginia Tech have also begun including a “multimedia” section in the “outreach and public engagement” section of their dossier. In this section, they encourage researchers to participate in non-traditional public engagement strategies like guest blog posts. The influence of these blog post themselves can be understood using altmetrics.

Some professional societies, such as The American Sociological Association, are recommending that Outreach and Engagement be formally recognised in promotion and tenure requirements. In a report published in August of 2016, The American Sociological Association discusses the importance of the practice, and even uses certain types of altmetrics and usage statistics as a means of illustrating the importance of engagement.

How to responsibly use altmetrics data for promotion and tenure

Before we get into the nitty-gritty of where to find altmetrics to include in a dossier, let’s talk about some principles for using metrics responsibly.

Metrics, without context, are meaningless to reviewers. That’s why recommend the following three rules that one should abide by when using altmetrics (or any metrics) in a promotion and tenure dossier:

Examples of researchers including altmetrics in promotion and tenure

Dr. Ahmed Moustafa, an Associate Professor of Bioinformatics and Systems Biology at the American University in Cairo, used altmetrics from his Impactstory profile in his P&T dossier to showcase the attention associated with his scholarly outputs. In addition to these altmetrics, Ahmed highlighted a few interesting media mentions. For example, his 2008 paper in Proceedings of the National Academy of Sciences was featured in popular media sources, such as Wired. 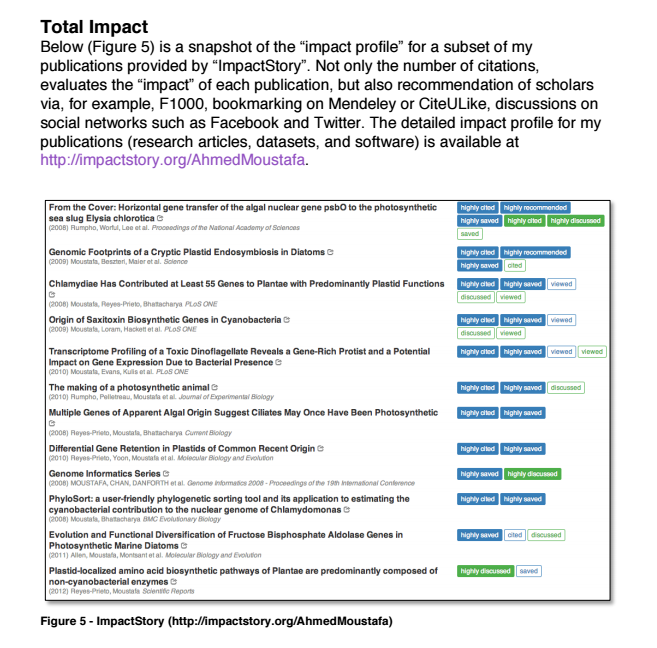 Dr. Steven Roberts, Associate Professor in the School of Aquatic and Fishery Sciences at the University of Washington, used altmetrics in his P&T dossier to showcase the attention associated with his scholarly outputs and engagement activities. In the chart below, you can see how many times Dr. Roberts’ datasets and documents have been viewed through his Figshare profile. This attention is bolstered by his own public engagement activities that include blogging, tweeting, and depositing his work in an Open Access repository. 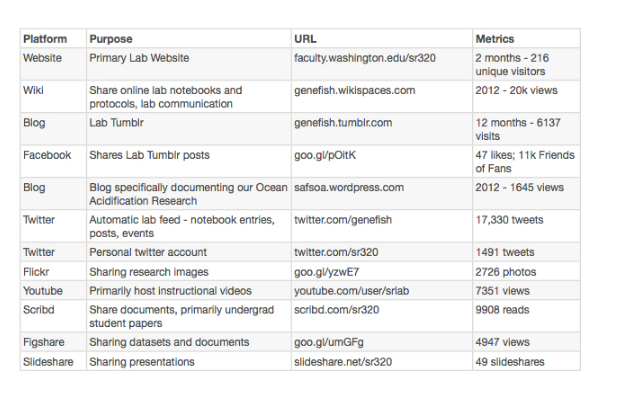 A solid source of evidence that will help you craft a compelling “impact story” (to borrow a useful phrase) can be found in qualitative data: who’s saying what about your work.

Dr. Trevor Brand used qualitative data to document the value of his science outreach efforts in his tenure dossier, in particular to showcase examples of online engagement he had with high-profile authors like Joyce Carol Oates and data visualisation experts like Edward Tufte.

If he were making an argument about the worldwide influence his engagement efforts have had, Dr. Brand could have gone one step further by adding Twitter or Mendeley maps to his dossier, or highlighting the fact that his work has received a lot of interest from other scientists worldwide. These types of data are available on Altmetric details pages (under the Summary tab), and freely accessible using the Altmetric Bookmarklet.

If Dr. Branch wanted to include specific examples of policy impacts or mainstream press coverage his work has received, he could have also used the Altmetric Bookmarklet to easily find links to those types of attention, and he could have copied and pasted mentions directly from Altmetric details pages for his work.

Qualitative evidence can be found in other altmetrics services, as well. PlumX Dashboards and Impactstory also both include some types of qualitative data on researchers’ profiles.

Evidence of impact beyond authorship

Altmetrics provide an opportunity for you to get credit for your work, beyond what you’ve happened to write a journal article about: creating and curating data, presenting at national and international conferences, coding widely-used software, and so on. Highlighting these “non-traditional” outputs can help you present a more holistic view of the value of your work.

However, to get altmetrics, research has to be discoverable by others. That means putting the stuff that’s normally kept private on one’s Dropbox account up onto the public Web. Visualisations, datasets, videos, and all other research outputs can be deposited in institutional repositories or in open access repositories like Figshare, and–once they’re “live”–can start accumulating altmetrics attention. Try to start this practice well before the point of preparing for promotion & tenure, so you have as much time as possible to capture attention data for your work.

Contextualised Raw Metrics in a CV

When looking to include raw metrics to your CV, it is important to add context. The best ways to do so are through the use of badges and percentiles.

Impactstory is a free researcher profile platform that gathers and displays altmetrics for a researcher’s entire body of work, at a glance.

To find Achievement badges for your work, first create an Impactstory profile. The profile must be linked to an ORCID ID, which are free to make. Impactstory displays all the published outputs that have been included in an ORCID profile and then collates attention associated with them.

Once your profile has been created, you can find any relevant badges in the “Achievements” tab on main landing page for the profile. You can choose to view all the achievements or sort by one of the four dimensions described above. 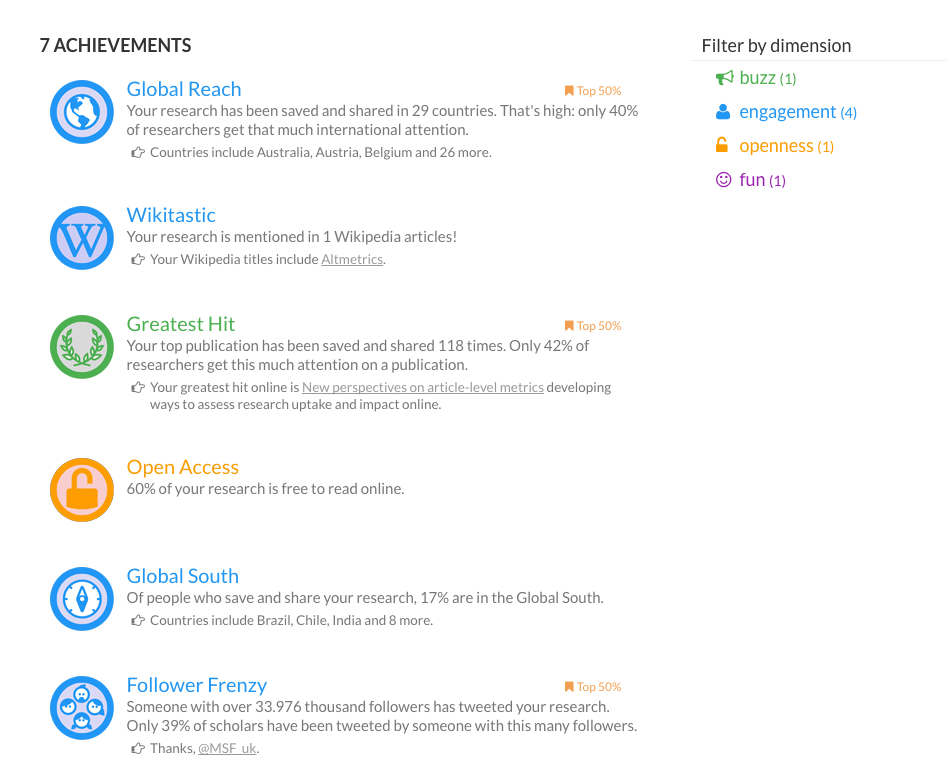 A screenshot of different achievement badges from Impactstory

Percentiles are a good way to offer a frame of reference for metrics. They can help reviewers interpret the relative influence of research by comparing attention data for your work with average metrics for other outputs that were published in the same year or the same journal.

Impactstory Achievement badges contain percentile information: how attention for your work compares to attention received by all research that Impactstory indexes.

Altmetric provides a “score in context” for most of the research it indexes on Altmetric details pages for outputs. To access this data, use the free Altmetric bookmarklet.

From the Summary tab of an Altmetric details page, click on “Attention Score In Context”, which will bring up the Altmetric Attention score in various contexts: how that article’s Attention Score compares to other articles published in the same journal, within the time period (that is, within six weeks of the article’s publication date), and compared to scores across the entire Altmetric database. This context is essential to an accurate understanding of an output’s attention and relative influence. 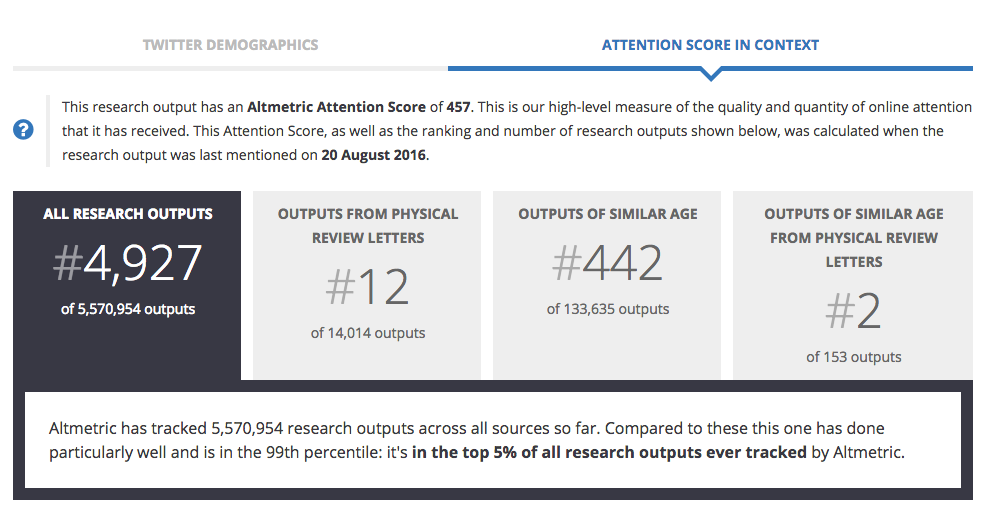 A Screenshot of the Altmetric Attention Score in Context

Have you included altmetrics in your tenure dossier, or do you plan to? Leave your thoughts in the comments, or share them with us on Twitter (@altmetric).

This post is based on a chapter in the new Altmetric ebook, “Altmetrics for Librarians: 100+ tips, tricks, and examples”. Download it to your computer, phone or e-reader now!

[…] all articles consulted during the course of research are cited, etc.) and that you should also use other alternative metrics in your tenure and promotion report. You decide that you would like to know if your prized article (the one that was recently […]