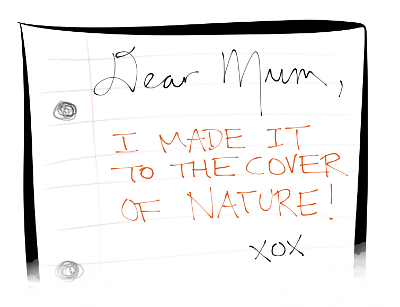 The art of research

The ease of electronic access, combined with the lack of print versions of online open access journals, means that flipping through a paper copy of a journal isn’t as common as it once was. Although retrieving scholarly articles electronically may have become the norm, many would agree that there remains something oddly satisfying about holding the physical copy of a journal issue.

One tradition that continues to be upheld by print journals (but is diminishing in importance for electronic journals) is the cover image. The cover is the first thing that you see when you pick up a print journal, and it might be the very thing that piques your interest in the content. Different journals have slightly different views of what constitutes as good cover art: for instance, the Journal of Neuroscience seeks “arresting and appealing images rather than those that serve to document experimental findings”, whereas Science Magazine informs potential cover artists that “images from significant papers that are striking to the nonspecialist have the best chance of being chosen”.

Ultimately, the function of cover artwork is to promote the journal, specific research, and/or the authors of a newly-published article. But the rise of electronic journals has diluted the presence of the cover image, meaning that the marketing value of such artwork is no longer as high. In 2006, the significance of cover art for chemistry journals in the digital age was comprehensively explored in a great piece that appeared in Chemical & Engineering News (C&EN). The article highlighted a number of interesting points, such as the issues of promoting particular works over others, the costs of designing and producing a cover, and the influence of cover images on laboratory prestige. Yet does all that career-boosting honour and pride that comes from being featured on a cover still benefit scientists today?

Dear Mum, I made it onto the cover of Nature!

Online mentions of papers tracked by Altmetric rarely include comments about the cover images of journals. This may be due to the reduced visibility of cover images in digital journals (especially if you go straight for the PDF from a library database). It’s also difficult to glean from qualitative Altmetric data that a particular paper was even featured as a cover image. An exception to this came last week, when a paper entitled “A vast, thin plane of corotating dwarf galaxies orbiting the Andromeda galaxy” was published in Nature and swiftly shot to a high spot in the Altmetric attention rankings. (In addition to its novel findings, the paper was notable because one of its co-authors was a 15-year-old teenager named Neil Ibata; this was also reflected in the tweets.) The following tweets congratulated the authors on their research accomplishments, making direct references to the issue’s cover:

A good day for @sydney_uni astronomers: two back-to-back papers in Nature, including the cover! go.nature.com/fnIS3x go.nature.com/RuhGIc

These tweets demonstrate how impressive an accomplishment it is for a scientist’s work to be featured on the cover of a journal. In spite of the low profile of journal covers today, competition to make it to Nature‘s cover is still so fierce that some decide to make journal cover cakes.

The alt-metrics of cover stories

Does being a featured article on the cover of a high-impact journal guarantee a high Altmetric score? To look into this possibility, we collected all of the cover articles in Nature and Science that were published within the past year. (They hold #1 and #3 respectively in the attention rankings for journals; #2 is held by arXiv, which isn’t a “traditional” journal per se, and therefore wasn’t analysed.) We selected the covers that represented primary research articles (as opposed to reviews, commentaries, news features, or special “themed” issues). We then determined the Altmetric score for these articles (and for their accompanying news and perspective features) within the period of 8 January 2012 and 8 January 2013. Bear in mind that Altmetric scores typically stabilise within 1 week of the first online mention, so in spite of differing publication dates, we still have a relatively accurate view of attention within the past year. All of the data are available to download from figshare.

1. The covers of Nature 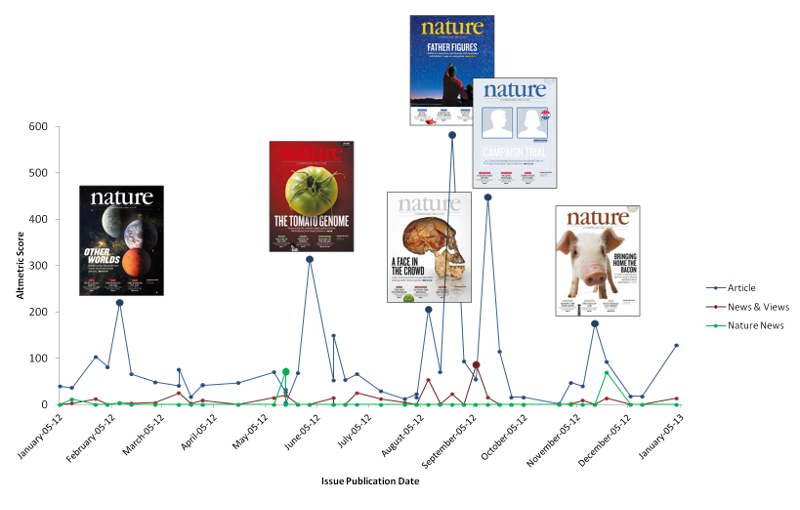 With an average Altmetric score of 86.4, Nature cover stories received a lot of attention in 2012. With 20 being a moderately high score (compared to what most papers receive), it comes as no surprise that 77.8% of sampled cover papers in this high-profile journal exceeded this threshold (see table on the right). What is immediately apparent from the above graph is that whenever there were peaks in attention, the magnitudes of the Altmetric scores were extremely high. Simply being on the cover definitely didn’t guarantee a massive Altmetric score, as the lowest score in the sample was 1.35 (the paper “Quasi-periodic events in crystal plasticity and the self-organized avalanche oscillator”). Another interesting thing to note is that the primary research articles usually received more attention than the “science communication” pieces that are typically more accessible to non-specialists. In other words, the Altmetric scores for the accompanying News & Views articles (non-open access and found in the journal) and Nature News pieces (available on nature.com) rarely surpassed those of the articles themselves, except in 2 instances: the 17 May and 6 September 2012 issues.

2. The covers of Science 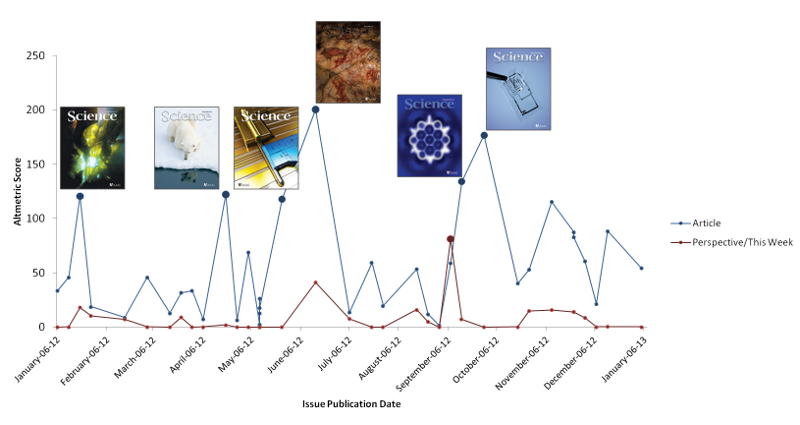 For Science Magazine, the cover stories had an average Altmetric score of 53.1. As with Nature, simply being a cover story didn’t ensure a high number of mentions; a paper called “The Geologically Recent Giant Impact Basins at Vesta’s South Pole”, which was 1 of 6 research articles associated with a single issue cover, had the lowest score of 1.25. Only once (in the 7 September 2012 issue) did a News & Analysis (grouped under Perspectives/This Week in Science) piece surpass the primary research article in Altmetric score.

In summary, the peaks and troughs in the 2 graphs shown above indicate that online attention for cover stories is inconsistent, suggesting that article subject matter might influence alt-metrics more than status as a cover feature. All cover stories received at least 1 mention online, but a few of these papers didn’t garner much attention at all. Clearly, being on the cover didn’t boost their Altmetric score; therefore, this seems to speak more to the public’s interest in the article’s content. In the future, it would be useful to compare the Altmetric scores for all articles in each issue against their respective cover articles’ scores.

EDIT (10 January 2013): This addendum has a few more comments about the data above. 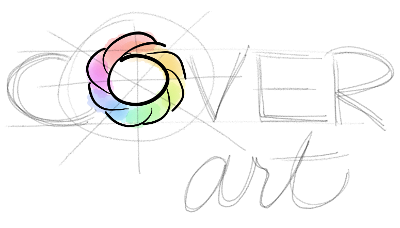 The fading world of cover art

Now that the concept of the journal issue as a standalone entity has been substantially altered by electronic publishing, cover art will likely hold less influence on readers’ interest in specific articles. Article level metrics might increasingly be used to suggest the merits of individual papers in a journal issue rather than being overshadowed by the perceived popularity of a cover article.

A cover image is meant to make an impression on readers. With the potential to communicate the intricacy, scale, and beauty of science, covers are works of art, and are regarded as badges of honour for the scientists and artists involved. Whether this respect for cover art will persist as the culture of online science communication continues to evolve remains to be seen. For the time being, journals still proudly display their cover images on their websites, and many even showcase past covers in online galleries. (See the galleries of Nature, Journal of Neuroscience, PNAS, CDC’s Emerging Infectious Diseases, and PMLA.)

Covers may not be getting very much online attention these days, but we believe that their artwork (and scientific images, such as those in Nikon’s Small World Competition or The Guardian’s Research as Art Competition) play important roles in science communication. And so we’ll leave you with a quote from the website of the CDC’s Emerging Infectious Diseases journal, which beautifully describes their view that covers are meant “to ‘humanize’ and enhance the scientific content by illustrating ideas, raising consciousness, revealing truth, stimulating the intellect, and firing the emotions”.

5 Responses to “Interactions: The Cover Stories”

[...] an unusual way: with a video of LOLcats. The study in question was featured on the cover of the 31 January issue of Nature and found that a particular subset of sensory neurons [...]

[...] already; for instance, see the Nikon Small World Photomicrography Competition and of course, cover art for scientific journals such as Nature and Science. Even if works of art associated with one’s research aren’t readily available, data can [...]

@NatureBlogs Nice post! If you're interested, I blogged about attention data for cover stories (incl. Nature) in 2013 http://t.co/okj6zqWMLO

We'd like to take a moment to add a few points about the data presented on our blog post, "The Cover Stories".

The question we asked was "Does being a featured article on the cover of a high-impact journal guarantee a high Altmetric score?" In other words, we were curious to know whether an article's status as a cover feature was in any way indicative of the amount of its subsequent social media attention. We compiled the Altmetric scores (scores taken between 8 January 2012-2013) of cover articles (letters/reports/research articles only) published in the past year within Nature and Science. (Take a look at the data here: http://dx.doi.org/10.6084/m9.figshare.106404.) In a few cases, one cover image referred to multiple studies (e.g., the 17 May 2012 issue about opioid receptor structures), so these were all counted. We observed that all articles that had been featured on the covers ended up having at least 1 mention within the specified timeframe. However, simply being a cover story didn't necessarily guarantee a massive Altmetric score.

We showed tables for both Nature and Science indicating that the majority of cover stories sampled in each journal had Altmetric scores above an arbitrary cutoff value of 20. For more information about how Altmetric scores are calculated, refer to this page: http://altmetric.uservoice.com/knowledgebase/articles/83337-how-is-the-altmetric-score-calculated-. If we had looked at the cover articles for other generalist journals, we might have found different results. (It's important to note that we were not trying to compare the scores for Nature cover articles to scores for Science cover articles.) Because we were looking at Nature and Science, which both have many articles that typically receive a lot of online attention anyway, we can't say from these data that being on the cover contributes anything at all to an article's Altmetric score.

Ultimately, this was an informal survey of alt-metrics data we have for cover articles. As mentioned in the post, much more could be learned by comparing the scores of the cover articles with scores of other research articles in the same issue. At this point, it's impossible to tell if being a cover feature really has much to do with the score outcome at all, especially given the inherent popularity of the journals sampled and the reduced visibility of covers online.